COVID-19  In-depth info for Indians in Atlanta/Georgia. Click here
Home > Magazine > Around Town > What role can soccer play in our push towards better civil rights?

What role can soccer play in our push towards better civil rights? 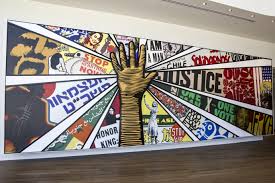 On July 21, 2015 at Atlanta’s new Center for Civil and Human Rights (left, site of panel discussion), four high-profile soccer players met, not in soccer uniform, but formally to participate in a panel, to discuss how “the world’s most popular sport” could fight racism and homophobia and promote tolerance and inclusion.

They met just as Atlanta is looking forward to a new professional soccer team, Atlanta United FC, beginning play in the new stadium in 2017, and as DeKalb County is planning to spend millions to help Atlanta Falcons owner Arthur Blank build a new practice facility for that new team. Proceeds from the event went to support soccer based youth development programming and provide opportunities to at-risk youth, projects of the host organization, Soccer in the Streets. Excitement is in the air these days, but serious issues are, too. 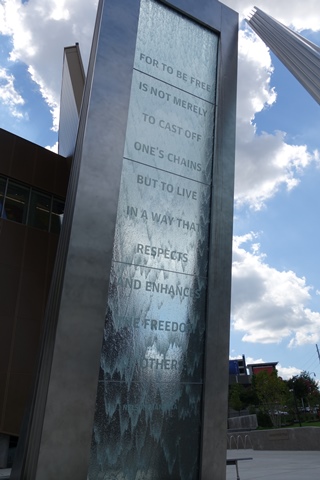 Quote from Nelson Mandela on Respect and Freedom at Atlanta's Center for Civil and Human Rights. (Photo: Suzanne Sen)

Panelists were former U.S. national team goalkeepers Briana Scurry (women’s team) and Brad Friedel (men’s) with U.S. Paralympic team head coach Stuart Sharp and President of the new Atlanta United FC Darren Eales. Topics included discrimination and inclusion: barriers to entry into the sport, both economic and regional; stereotyping and unfair practices based on gender (including unequal pay for women), race, disability, and sexual orientation. While the panel agreed that things are improving, Friedel said that change starts in the home and works its way up through school, friends, work, and more. Scurry believes the role models in the sport must take a stand when they see a problem, and others said that fans must speak out, too. 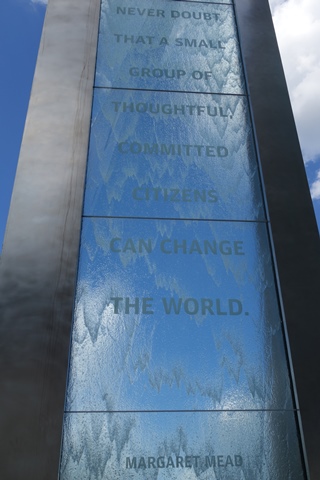 Quote from Margaret Mead on Citizens and Change at Atlanta's Center for Civil and Human Rights. (Photo: Suzanne Sen)

How does this tie in to South Asian issues? The community has seen racial stereotyping increase since 9/11, vandalism of places of worship, bullying of students in DeKalb and Gwinnett Counties, for example, and even police brutality against a meek grandfather in Alabama. As these soccer athletes are calling for action, so too can the South Asian community. The Roswell Police Department’s Community Relations Unit has had a good experience with a police vs. Hispanic soccer game, and is open to other groups. We can speak out, we can invite them. Playing sports is a great way to connect, to build understanding and trust and decrease fear and hostility. If we worry about what our little ones may face in school or our teens may face on the street, we might try facing and friending the parents and police, through sports.

Several Indian-Americans attended the event and were glad to see courage leading to change. But it can only come, as these athletes show us, through meeting, discussion, planning, and action. Interested? Contact the author.

[The article above appears only on the website for September 2015, not in the September print/digital issues.]