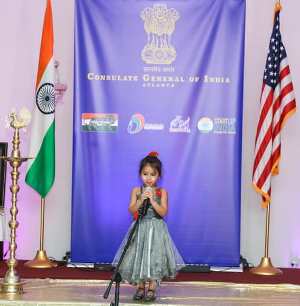 The Consulate General of India in collaboration with the Hindi drama group Dhoop Chaoon celebrated the 4th Vishwa Hindi Diwas (World Hindi Day) in Atlanta at Ashiana Banquet Hall, Norcross, Georgia on Friday, January 11, 2019. The day is celebrated each year to mark the anniversary of the World Hindi Conference first held in Nagpur, India on January 10, 1975.

It was heartwarming to see young kids born here in the United States connected to their lingual roots, and to see people from all age groups and speakers of different dialects coming together for Hindi, the mother tongue of many of us and the language that connects the Hindi speaking diaspora.

The organizers presented a drama to pay a tribute to Late Prime Minister Atal Bihari Vajpayee, who was a Hindi poet and well-known promoter of the Hindi language on world platforms. Kaushal Tripathi, Sanjeev Agarwal, Rakesh Lunawat, and Dheeraj Lunawat played the role of the former Prime Minister in the different stages of his life. The Consul General also paid floral homage to PM Vajpayee.


The Consul General also launched a book of Hindi poems written by Bikash Kumar, an official of the Consulate.

Consul Shailesh Lakhtakia wrapped up the evening with a vote of thanks to all from the more than 200 attendees.

Thanks:
Thanks to Anil K. Bhagat for his backstage help.
Special thanks to TV Asia and other media for their support.

[The article above is a Website Bonus Feature, appearing only on the website for March 2019, not in the print/digital issues.]