FUN TIME: AS INTERNET USE INCREASES, SO DOES STRESS 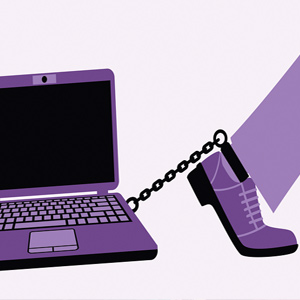 If computers had human emotions, my wife’s laptop would be envious of our dog, Legacy. My wife hardly ever says a harsh word to Legacy, even when the dog does something bad, like stealing food from our kitchen counter. The computer, on the other hand, is always the target of harsh words. Not a day goes by without my wife saying something like, “This computer is so slow!” or “Stupid computer!”

Considering all the stress it gives her, it’s a wonder she still keeps her laptop around. She can’t live without it, of course. Like millions of people around the world, she needs her computer to do her work, as well as connect her to the world.

A recent report published by McKinsey & Company and Facebook indicates that about 500 million Indians will use the internet by 2018, compared to about 200 million today. That’s 300 million more people in India who, in just four years, will be shouting, “Stupid computer!”

Computers and the internet have changed many of our lives dramatically—seemingly for the better. We can do so much online: communicate with people through email, post photographs of ourselves on Facebook, and check how little money we have in the bank.

Many of us spend more time socializing online than in the real world. We have online friends whom we’ve never met in person, friends who may be all the way across the world, yet share common interests with us, even if it’s just an interest in constantly hitting the “Add Friend” button.

My children and other youngsters have grown up with the internet as part of their lives. They don’t realize how lucky they are to have so much information, so much entertainment at their disposal. They can watch music videos and movies online, take classes at distant universities online, and, when they’re old enough, meet their mates online.

That’s how I met my wife – through a matrimonial site. It happened 14 years ago, when internet speeds were a lot slower than they are now. We couldn’t watch videos on the internet back then; they would keep pausing. Even photographs took a while to load, which was a good thing. My wife didn’t see mine until it was too late.

These days, photos appear almost instantly, especially if you have a high-speed connection. Videos hardly ever pause. And yet I often hear my wife shouting, “Stupid computer!”

The computer is “stupid” because it fails to process information fast enough, for one reason or another. It’s much faster than it used to be, but we’ve become spoiled. We expect technology to work perfectly, and when it doesn’t, we get frustrated. That’s partly because we’re more dependent on technology than ever before. Many of us rely on our computers, as well as the internet, to do our jobs. If the internet isn’t working, neither are we.

I realized this a few weeks ago when my town had a power outage and we had to manage without electricity for 12 hours. I didn’t mind being without lights and TV, but not having the internet almost killed me. The headline in my local newspaper would have said “Man Dies of Internet Deprivation.”

My grandparents didn’t live long enough to witness the internet era, and I sometimes wonder if their lives were better for it. They didn’t get stressed out about slow internet speeds or pop-up ads or computer viruses. They didn’t socialize on the internet, so they had time to get to know their neighbours, time to sit around and chat with people in their village.

In a few years, more than a third of Indians will be on the internet. The other two-thirds, like my grandparents, may actually be the lucky ones.