FUN TIME: PLEASE DON’T GIVE ME A PARTICIPATION TROPHY 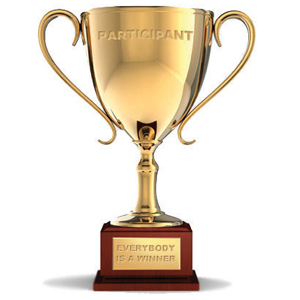 A football player named James Harrison recently expressed his opposition to participation awards after his two sons, aged 6 and 8, returned home from a sports camp with trophies.

“While I am very proud of my boys for everything they do ... these trophies will be given back until they EARN a real trophy,” Harrison, who plays for the Pittsburgh Steelers, wrote on Instagram.

A “real trophy,” in his view, is one that you earn by achieving something, such as winning a tournament, rather than merely participating.

I somewhat agree with him, but let me give you some background first. Throughout my entire childhood, I never received a single trophy, not even for coming third in the egg-and-spoon race. If someone asked me if I was athletically inclined as a youth, I’d say “NOT,” which stands for “Not One Trophy.”

No, I’m not bitter about this. I didn’t win any sporting events, so why should I care that I have no medals or trophies to show for all the hours I spent in the hot sun, all the buckets of sweat I released into the environment? Why should it bother me when I visit a friend’s house and see all the trophies and medals his children have won for participating in sports, awards inscribed with words such as “2015 Karate Award for Enthusiasm and No Broken Bones” and “2015 Spelling Bee Award for successfully spelling your own name.”

I grew up in a developing country, Zambia, where even the winners of sporting events didn’t always get trophies. If you were the fastest runner in school, you took pride in representing your school in interscholastic events, even if you didn’t receive a trophy. And if you were like me, you took pride in making it to the finish line in the cross-country race, even if you tripped over a few times and accidentally ate some grass. (They almost gave me the MVP award—Most Vegetarian Participant.)

Nowadays, in America and other wealthier countries, it’s quite common for everyone on a youth sports team to receive a trophy at the end of the year. Each of the players has paid a fee to participate in the sport and it doesn’t cost much for organizers to buy small trophies for them all. These trophies are handed out like candy at an awards dinner, giving parents an opportunity to take a photo of their child with a trophy, which they can proudly display on their wall—their Facebook wall, of course.

“So proud of Johnny,” a parent might write. “He has participated in soccer for three years and finally scored his first goal this year.” (No mention, of course, that it was an own goal.)

Just imagine how much money the trophy industry would lose if sports organizers stopped handing out participation trophies. Dozens of factories in China would close. Liu Peng, China’s Minister of Sports, would call a press conference to try to save the industry.

Peng: “It is very important to encouraging the children! Without encouraging, they will not do good.”

Reporter: “Can’t you encourage them with words? Aren’t words like ‘Good job!’ and ‘Nice try!’ enough?”

Peng: “Yes, words are good. But trophies are better. Words, you forgetting, but trophies lasting forever, even if made in China.”

Reporter: “What about adults? Do they need encouragement, too?”

Peng: “Yes, everyone needs encouragements. That’s why we telling companies, if your employees showing up for work on time, give them trophies. Husbands, if your wife cooking a good meal, give her trophy. And wives, if your husband not cheating on you, give him trophy.”

Reporter: “You want husbands to give their wives trophies for cooking?”

Peng: “Yes, very important. Why must famous actors be only ones with trophy wives?”

Encouraging children is important, but a participation trophy may give them the idea that merely showing up is enough. The trophy needs to be tied to some sort of achievement. Completing a marathon is certainly worthy of a medal, but I wouldn’t say the same about participating in a 12-week badminton league. (If Saina Nehwal is in the league and you get a single point off her, then by all means, help yourself to a trophy.)

My three children have received medals for participating in a spelling bee contest. Two of them also received small trophies for finishing second in their respective age groups.

The trophies are displayed prominently in our home. The medals … well, I’m thinking of mailing them back to China.