FUN TIME: TALENTED CHICKEN CAN TEACH US A LOT 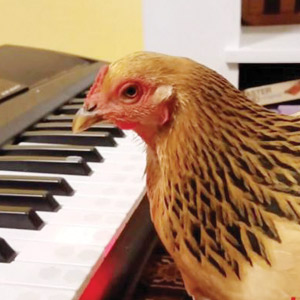 If you’ve been on the Internet a lot lately, you’re probably familiar with Jokgu the chicken. Jokgu is a musician and as close to being a celebrity as a chicken can get. Jokgu is the Taylor Swift of chickens, except that Jokgu does not sing about ex-boyfriends.

Jokgu’s talent isn’t in singing—it’s in playing the piano or keyboard. Jokgu recently appeared on the show America’s Got Talent and amazed everyone by playing the tune of “America the Beautiful” on a keyboard. Members of the audience just couldn’t believe their eyes. Was it really possible for a chicken to have more musical talent than half the audience?

It turns out that it is indeed possible, as long as chickens are given an opportunity to learn music at an early age. Jokgu, a two-year-old chicken of the Buff Brahma Bantam breed, lives in a Maryland coop that is well-stocked with toy musical instruments, such as a keyboard, drums, and xylophone. Some of the chickens in the coop have even formed a band. Tour dates will be announced soon. Perhaps they’ll even make a trip to India, like Justin Bieber did recently.

Jokgu, in case you’re wondering, didn’t learn to play “America the Beautiful” all by herself, although she did come up with a tune called “America the Wormful.”

It was her owners who trained her to peck at the keyboard in a deliberate pattern, playing the notes of “America the Beautiful.”

“It took about two weeks to get her to this level through clicker training,” Shannon Myers, co-owner of the coop, told Huffington Post. “Just about 10 minutes to get her to peck the keys initially.”

Clicker training is a method of training animals through positive reinforcement. After performing a task, the animals hear a click and then receive a reward, such as a morsel of food.

“Because you can click faster than give a reward, they immediately associate the click with the wanted behavior which then leads to reward,” Myers said.

This is exactly how my wife trained me to do the laundry. Every time I put clothes in the washing machine, she made a clicking sound and handed me a reward: the TV remote.

Chickens, in general, do not like to travel, whether it’s in the cargo hold of a plane or on a tour bus. They’re especially leery about performing at venues that serve food. Imagine being on stage, trying your best to entertain everyone with your musical talent, and some rude person in the audience is eating fried chicken. It’s just not right.

Whatever she does with her career, Jokgu should serve as an inspiration to everyone. If a chicken can play a musical instrument, what excuse do humans have for not even trying?

Imagine if I could teach her to play a musical instrument or two. Instead of sleeping all day, she could entertain me.

But even if a musical instrument is too much for Legacy to learn, surely I could get her to master the washing machine. It would be a great service to our family—as long as my wife doesn’t reward Legacy with the TV remote.