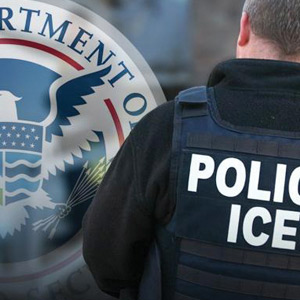 If you ask Indians on the street how they feel about ice, you will probably get puzzled looks that say, “What kind of an idiotic question is that?”

Those who bother answering the question may say something like this: “Of course, I love ice. Who doesn’t love ice in this burning heat? If you want some cold water, just ask for a cup of ice and wait a second or two.”

But if you ask Americans on the street how they feel about ice, you will get mixed opinions. “We don’t need it anymore,” some will say. “Ice is too cold.”

Ice is indeed cold, but those complaining that it’s “too cold” are usually referring to ICE, not ice. ICE stands for Immigration and Customs Enforcement, the government agency that arrests and deports unauthorized immigrants. Many people believe that ICE has been too aggressive in enforcing America’s immigration laws. Others feel that ICE has not been aggressive enough.

It’s an interesting debate, but the first thing that the U.S. government needs to do is rename ICE. It’s not fair to ice to be connected with ICE. Let’s just compare them:

• Ice has been around for billions of years; ICE has been around since only 2003.
• Ice helps cool people down; ICE makes people sweat.
• Ice can be used to treat ankle sprains and other injuries; running from ICE can cause ankle sprains and other injuries.
• In hot weather, people often ‘raid’ the refrigerator for ice; during an ICE raid, people hide in the refrigerator.
• Ice is used as a surface for hockey, figure skating, and other sports; ICE never lets people skate.

Some politicians want to abolish ICE, prompting many others to defend ICE. They’re concerned that ICE might melt away in the heated political climate. But many of the people who don’t want ICE to melt away are often oblivious to a bigger concern: ice melting away.

The world needs ice badly, particularly the ice in the Arctic and Antarctic regions. According to a report in The Guardian, two studies have shown that melting in Antarctica has “accelerated threefold in the last five years” and the polar ice sheet is now disappearing faster than a crowd in Los Angeles after someone shouts “ICE!”

So why should we be concerned about all this ice melting? Why should we try to slow down global warming? Well, for one thing, when the ice melts, it increases the amount of water in the world’s oceans. Some scientists believe that unless something is done, global sea levels could rise by more than one meter over the next 50 years. The choice is clear: Either we do something about global warming or we all take swimming lessons.

West Virginia businessman: “It used to take my grandfather six hours to get to the beach, but it takes me only four hours. Isn’t it great?”

Son: “Did your grandfather drive a slow car or what?”

Businessman: “No, the ocean has been moving closer to West Virginia.”

Son: “Aren’t you worried that it will keep coming closer?”

Businessman: “No, I’m prepared for that. Why do you think I bought a mobile home? If the ocean gets too close for comfort, we’ll just move further back.”

Son: “So this is what they meant on CNN when they said that America is turning blue.”