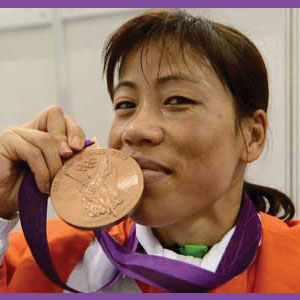 Despite being a five-time world champion, Mary Kom, a 29-year-old mother of two from Manipur, had neither the fame nor the financial security that many top athletes enjoy. In Rahul Bhattacharya’s excellent profile of her for Intelligent Life magazine, Kom revealed some of the obstacles she has faced. “When I started, they say boxing is not for girls,” she said. “After I get married, they say I cannot win after marriage. After I have baby, they say I cannot win after baby. So I want to prove, I want to show that I can make history for India.”

Kom did exactly that—winning a bronze medal for India at the London Olympics, despite having to fight in a higher weight category (51 kg) than she was used to. While a gold medal would have capped her career perfectly, the bronze was enough to win her monetary awards and adulation in medal-hungry India. The country sent seven male boxers and one female boxer to the Olympics, and only one of them returned home with a medal. They don’t call her Magnificent Mary for nothing.