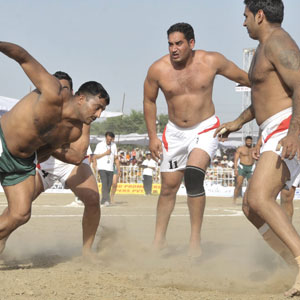 India has won eight gold medals in field hockey at the Summer Olympics, but the last one was way back in 1980. The country hasn’t won a single medal in a team sport since then. But that could change at the 2016 Summer Games in Rio de Janeiro, especially if Punjab’s deputy chief minister Sukhbir Singh Badal gets his wish – to have kabaddi included as an official sport.

Badal, who is credited with popularizing kabaddi internationally, made his pitch for the Olympics after the Indian team beat Pakistan 53-38 to win the Circle Style Championship title at Tabriz in Iran.

India also thumped Pakistan last year to win the third kabaddi World Cup, having also won the 2004 and 2007 World Cups. Nine nations competed at the 2010 World Cup, including the United States, Australia, Canada and the UK.

Another World Cup is expected to be held in Punjab this month, according to a PTI article. It seems too soon to have one again, but when you’ve been dominating the world, why wait three years to do it again?