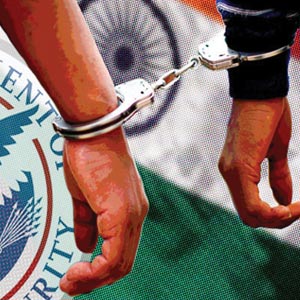 No, that’s not a team of human smugglers. Those are the aliases that a 61-year-old man named Yadvinder Singh Sandhu used as he led a human smuggling ring. Sandhu admitted that he personally helped about 400 people enter the United States unlawfully between 2013 and 2015.

According to the Justice Department, Sandhu and his team made flight arrangements for people to travel from India through other countries—including Thailand, the United Arab Emirates, Argentina, Iran, Panama, Venezuela, Belize, and Haiti—to the Dominican Republic. From there, the team brought people to Puerto Rico or Florida by boat, often in overcrowded and unsafe conditions.

Sandhu’s customers paid between $30,000 and $85,000 to be smuggled from India to the United States. This lucrative business has occupied Sandhu off-and-on for many years.

He smuggled himself into the U.S. through Canada when he was 20. In 2000, he was convicted of human smuggling and served a one-year prison sentence. After his release, he was deported to India, but made his way back using a passport with a fake name and a real visa.

After his current prison sentence, he will be deported to India again. And you can bet that Sandhu—or perhaps Bhupinder Kumar, Rajinder Singh, Robert Howard Scott, and Atkins Lawson Howard—will be back in America before long.