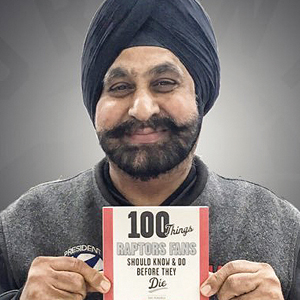 Nav Bhatia is a mechanical engineer by training, but when he immigrated to Canada in 1984, he had trouble finding a job in his field, so he became a car salesman. It wasn’t always a pleasant experience, as he faced racism from some customers.

“They said they wanted to be served by a ‘normal’ salesman without a turban,” Bhatia recalls in a new documentary by the Canadian Broadcasting Corporation (CBC) called “Superfan: The Nav Bhatia Story.”

Bhatia overcame such challenges to become a successful car salesman and eventually a car dealership owner. Then in 1995, when the Toronto Raptors came into existence, Bhatia began attending home games and turned himself into one of the most enthusiastic and recognizable fans of the NBA team.

In February 2020, the Basketball Hall of Fame in Springfield, Massachusetts, honored him as one of the first fans featured in a new superfan gallery.

The documentary, which debuted on CBC in early December, tells the story of the 70-year-old fan’s rise from struggling immigrant to successful businessman, mirrored by the Raptors’ rise from perennial doormat to a surprising NBA title in 2019. Bhatia was rewarded for his loyalty to the team, becoming the first fan in NBA history to be given a championship ring.

Despite all the attention and accolades, Bhatia was surprised to be featured in a documentary.