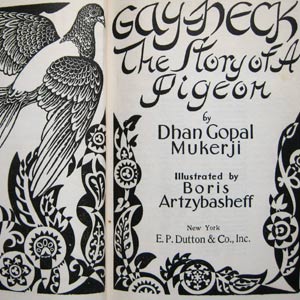 Not many people have heard of Gay-Neck: The Story of a Pigeon, nor its author Dhan Gopal Mukerji, but the book won the John Newbery Medal for children’s books in 1928. The Calcutta-born author, who studied at University of California, Berkeley, remains the only Indian-American to win a Newbery Medal.

Oindrila Mukherjee, an assistant professor at Grand Valley State University, has helped bring some attention to the book, which tells the tale of an Indian boy and his pigeon, named Gay-Neck because of its iridescent neck.

“Even though Gay-Neck was intended for children, the writing is remarkably sophisticated and the story layered with multiple meanings,” Mukherjee writes.

The book follows Gay-Neck as he escapes from his owner in India, is eventually tracked down, and serves as a messenger pigeon in France during World War I.

“Mukerji’s writing is often lyrical, and his descriptions of both the city and the mountains are vivid,” Mukherjee writes, and “the Himalayan landscape … evoked with much care.”

She gives an example of the fine writing: “The finger of autumn had already touched the rhododendrons. Their flaming petals were falling out; their long stems, many feet high, rustled in the winds. Leaves of many trees had begun to turn, and the air was full of melancholy.” Gay-Neck is a forgotten book, but thanks to Mukherjee, it will hopefully find its way to more bookshelves in Indian-American households.