THE SIMPSON’S APU: PROBLEM OR NO PROBLEM? 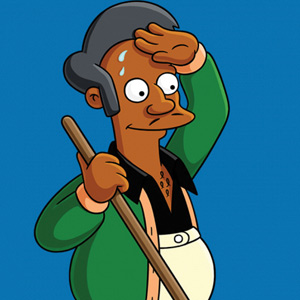 Apu Nahasapeemapetilon, the heavily accented convenience store clerk on The Simpsons, first appeared on the animated TV series in 1990 and was once the only regular Indian character on American TV. Since then, Indian-American characters have proliferated, but Apu has remained prominent, a source of growing controversy.

“You start to feel embarrassed to be an Indian,” Kondabolu says. “Because there’s only one representation.” In late April, Hank Azaria, the actor who voices Apu, made an appearance on The Late Show with Stephen Colbert and indicated a willingness to let Apu fade away. It’s important, he said, “to listen to South Asian people, Indian people, in this country, when they talk about what they feel and how they think about this character. And what their American experience of it has been.”

But Matt Groening, creator of The Simpsons, seems unfazed by the criticism of Apu. “I’m proud of what we do on the show,” he told USA Today. “And I think it’s a time in our culture where people love to pretend they’re offended.”