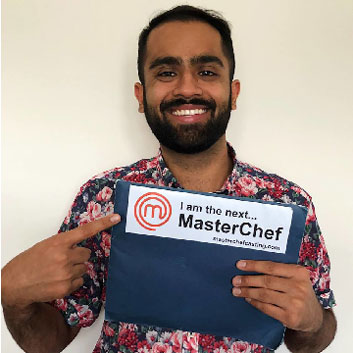 Farhan Momin is a rising chef—his family owns Tava Indian Bistro in Decatur, GA—and his favorite creations include butter chicken pizza and nihari sandwich. The Emory graduate, who grew up in Atlanta, is also a dental student, now in his fourth year at Midwestern University in Chicago. Dentistry hasn’t dampened Momin’s enthusiasm for cookery, going by his recent success on the TV show MasterChef, which airs every Wednesday on Fox.

Overcoming a minor setback, Momin performed well in his recreation of judge Gordon Ramsay’s crab benedict, allowing him to advance to the next round. While two co-contestants were eliminated, Momin is (at the time of writing) still a contender who hopes to win $250,000, the show’s ultimate prize.

The next new episode is scheduled to air July 11.