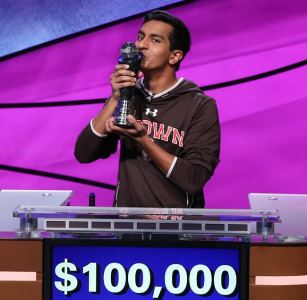 Dhruv Gaur, an 18-year-old from Gainesville, Georgia, won the $100,000 “Jeopardy!” college quiz championship on April 20, 2018. He will go on to play in the “Jeopardy! Tournament of Champions.” Jeopardy is America's most popular quiz show televised nationwide.

Dhruv had scored a perfect 1,600 in the nationwide SAT college entrance exam, and is now a freshman at Brown University, studying public health and economics. After he qualified for Jeopardy in a 50-question online test, he went to the next round in Boston where he faced other undergraduate whiz kids. His winning performance there sent him to the show in Culver City, California. In the semi-final round on April 18, he faced Rishab Jain, a freshman at Georgia Tech from Memphis, Tennessee.

After winning the college quiz $100,000, he says, "I'm just going to save it until I need it for grad school or to pursue an opportunity I might really want in the future….My little brother is really interested in investing, so I'll give him some so he can give the stock market a go," he added.