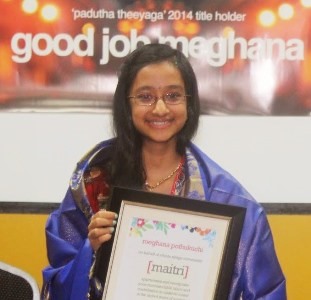 Members of the Atlanta Telugu community came together in a Maitri meeting held on August 10 and showered Meghana with blessings and best wishes following her win in a national singing competition.

Meghana Pothukuchi, a 12-year-old resident of Johns Creek, Georgia is the national winner of the singing competition Paadutha Theeyaga – USA 2014.

Paadutha Theeyaga is an Indian singing competition in Andhra Pradesh in the Telugu language, conducted by the legendary playback singer, Dr. S.P. Balasubramaniam (who was honored in Atlanta in July 2014); it airs on ETV Telugu. The program began in the 1990s as the first music-based reality show started in South India. This is the second year that Paadutha Theeyaga has been held in the USA, this time for kids of 9-12 years. Of those who auditioned from all over the USA, 19 were chosen as contestants, and Meghana was the only participant selected from and representing Georgia.

Meghana is a seventh grader from Taylor Road Middle School and has been learning piano and Bollywood dance in addition to Indian classical music for the past 6 years. She has participated in many programs and competitions: she was “Carnatic Kid of Atlanta” in the Carnatic Idol Competition 2011, an American Telugu Association Super Singer 2012, and a North American Telugu Association Nagara Super Singer 2013.

Meghana’s Padutha Theeyaga journey began in December 2013 when she submitted her audition song, “Sadiseyako Gaali" from the movie Raja Makutam. When the Padutha Theeyaga team responded favorably in April, her excitement knew no bounds—but then her apprehension mounted as the tasks for the competition loomed in front of her: she had to memorize the Telugu lyrics of a list of 23 songs that were given to her, get the correct pronunciation, and sing for the first time with a live orchestra. What made it really daunting for this US-born girl was that she cannot read, write, or speak fluently in Telugu. Further, having been classically trained till now, she had to sing songs of different genres (pop, with fast beat, melody, etc.) as the competition tests the contestants on overall singing abilities. Character evolves when grit and determination are tested; she committed time and energy to all this, including understanding the meaning of the Telugu lyrics to get the correct bhavam (emotion) while singing. 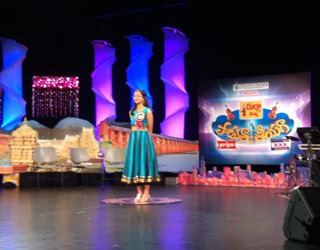 She also had to travel every week, to eight cities in six weeks: Atlanta-New Jersey-Columbus-Pittsburg-Kansas City-St. Louis-Detroit-Philadelphia (each show was recorded for episodes to be telecast from November 2014). There was little time to settle at one place and even less time to dwell on homesickness. The only way was to focus on the songs and prepare for the weekend when the competition rounds were held and recorded. And that is what she did, even if it meant living with a set of ear plugs and practicing songs as she walked across busy airports every week. She now maneuvers any airport like a professional traveler.

Interacting with the legendary SPB, a perfectionist with music in his soul, goodwill in his heart, and an ocean of knowledge, was an experience unlike any other. True to his reputation, the maestro quickly allayed the fears of the children and added a new dimension of enrichment to the competition. He connected with the kids affectionately, gave insights on songs and lyrics, and ensured that each participant received fair and honest feedback that helped each child to improve further. 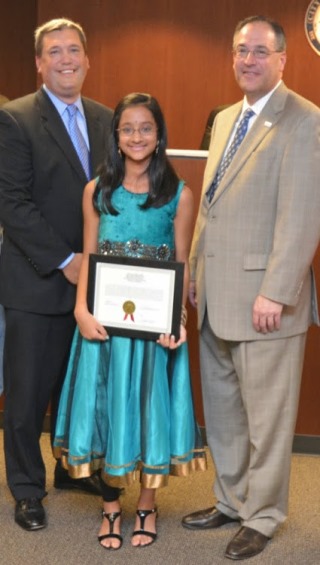 After grueling sessions, rigorous memorizations, nail biting moments of suspense at elimination rounds, came the dramatic finale in front of a 3000+ audience at the Pennsylvania Convention Center in downtown Philadelphia in July. Meghana was declared the winner of the competition and awarded $10,000 by grand sponsor YUPP TV. Meghana gained from her experience and, in her journey to this achievement, made her family and teachers proud and understood that true happiness results from determination, hard work, and focused practice.

Johns Creek Council Member Leonard Zaprowski (Left) presented a Privileged Resolution recognizing Meghana Pothukuchi, and Mayor Mike Bodker (Right) awarded her a plaque on August 4, 2014.  Members of the Atlanta Telugu community also came together in a Maitri meeting held on August 10 and showered her with blessings and best wishes. (Photo: Top of page)