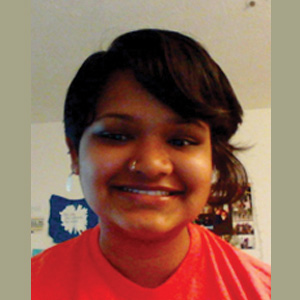 Most people who arrive on America’s shores as teens would probably still have their hands full learning the ins and outs of their new country by the time they arrived at college. Not so for Syeda Nowmee Shehab, who immigrated to the United States with her family from Bangladesh at the age of 16, and leapt right into problem solving in her new country. While in high school, she worked to develop an anti-bullying policy and served as a student coordinator for Amnesty International.

Nowmee came to Emory University from Smith College, having first spent a year in Boston working with the literacy and mentoring program City Year and with the Trevor Project to help prevent teen suicide. At Emory, Nowmee works on many programs related to issues of social justice. She is studying Political Science as well as Women, Gender, and Sexuality Studies. She works in the Center for Women and is a Co-Coordinator for the Respect Program in the Office of Health Promotion, which engages the Emory community in preventing and responding to sexual assault and relationship violence. She is also a long-term volunteer with a nearby women’s refugee resettlement program, giving back to these women incalculable knowledge about how to navigate in Atlanta and the United States. This remarkable young woman is Emory’s newest undergraduate Unsung Heroine.

Nowmee Shehab (class of 2016) received the undergraduate Unsung Heroine Award from the Center for Women at Emory (CWE) at the Women and Gender Awards ceremony cosponsored by the Emory Alumni Association on March 6, 2014 at the Miller Ward Alumni House. (The event was in March along with International Women’s Day (March 8) and Women’s History Month.)

Update April 15, 2014: Community Newsmaker Nowmee Shehab is in the news again, being honored as one of the young activists taking a stand to end rape culture in universities across America.
“Inspiring Young Activists Band Together Across America to End College Rape Culture” by Julianne Ross, April 10, 2014.
http://www.policymic.com/articles/87181/inspiring-young-activists-band-together-across-america-to-end-college-rape-culture