Psychiatrist of the Year Award for Dr. Dilipkumar Patel 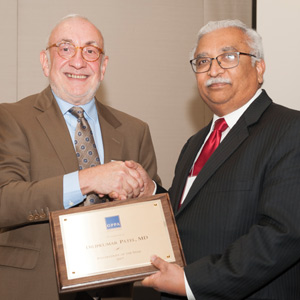 (Left) Stewert Shevitz, MD, Past President of GPPA, presents the Psychiatrist of the Year Award to Dr. Dilipkumar Patel.

The Georgia Psychiatric Physicians Association (GPPA) gives its Psychiatrist of the Year Award every year as a surprise announcement during the luncheon at its winter GPPA meeting. On February 4, 2017, this year’s Award was given to Dilipkumar Patel, M.D., a Board Certified General Psychiatrist and a Forensic Psychiatrist, who has been working in correctional settings, serving in State Psychiatric Hospital for 25 years and practicing in Georgia since 1988.

GPPA is a district branch of The American Psychiatric Association (APA). Members are dedicated to promoting professional values and ethics in the practice of psychiatry; improving patient access to quality mental health care; lifelong learning and professional development; and supporting education and advocacy for the profession, patients, and their families. The award is given to a member who has demonstrated exceptional commitment to psychiatry and has used his/her skills as a psychiatrist in service to the community.

Dr. Patel has always volunteered to serve his profession. He has served several terms on GPPA’s Board of Trustees and is Chair of its International Psychiatry Committee. He is a Distinguished Life Fellow of the APA. He has been an International Medical Graduate delegate with the Medical Association of Georgia (MAG) since 2009 and serves on its Correctional Medicine Committee.

His services to Indian physicians are multifold. A Past President of the Georgia Association of Physicians of India Heritage (GAPI), he is now Chair of its Board of Trustees. He is the founding president of the Georgia chapter of the Indo-American Psychiatric Association (IAPA), and is currently President-Elect of the national organization. Dr. Howard Maziar, Past President of GPPA, was quoted in the GPPA newsletter Mind Matters, saying, “Dr. Patel has worked tirelessly to bring internationally trained psychiatrists who might otherwise feel marginalized into organized medicine.”

An adjunct Assistant Clinical Professor at the Morehouse Department of Psychiatry, he has taught many of their psychiatric residents since the beginning of the program. At State Hospital, he was not only President of Medical Staff, but helped many Georgia IAPA members practice for their oral board examinations.

Dr. Patel served Gujarati Samaj of Atlanta—the largest, language-based, service-oriented, Indian organization in metro Atlanta in operation since 1980—in many different capacities for 20 years, including being a President and Registered Agent. Under his Vice-Presidential leadership in 1992, Gujarati Samaj arranged its first Health Fair, and Dr. Patel has helped arrange this event every year on Father’s Day, with the help of many volunteer doctors, dentists, pharmacists, laboratory technicians, and other paraprofessionals.

He is married to Dr. Daksha Patel, a pediatrician, whom he met while in medical school in India. He has two daughters; the oldest completed her sports medicine fellowship last year after finishing family medicine residency at the Carolinas Heath Care System and is now working with her husband, also a physician, within the same system.