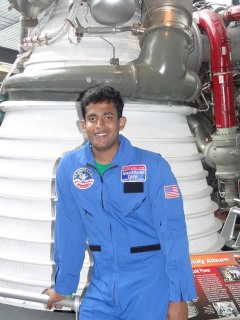 Tushar Mittal, a junior at Dutchtown High School, Stockbridge, GA, recently completed the NASA Science Writing Challenge Program at the University of Georgia-Griffin, winning second place for his writing about potential causes and cures for the Human Immunodeficiency Virus (HIV). (See below for the text of his article.) Students met with university research scientists from April through June to investigate the art of writing about scientific topics for a general audience. Tushar's winning entry won him a week-long experience at the NASA Space Academy in Huntsville, Ala.

This was by no means Tushar's first venture into science. He has won numerous first place awards in school, county, and state science fairs, and he was one of 35 Georgia students in the Intel International Science and Engineering Fair (ISEF), the world's largest pre-college science competition, where he competed among 1500 students from 68 countries with his project, "Using Oxidation as an Advantage: Producing Electricity and Purifying Wastes." After a power outage at his grandmother's home in India, he decided to find a cheap renewable electricity source and was able to make a microbial fuel cell, using mud-water and fish-tank water, and converting the chemical energy produced by bacteria into electricity, with the bonus of the water being purified. Tushar won a $1,000 cash prize for placing third in the competition’s “environmental management” category; he plans to put the money toward his college education and a future in the medical field.

Two other local Indian-American students also deserve recognition for making it to ISEF:

Vivek Kamlesh Patel (left photo) of Suwanee for his entry, "A Novel Positive Regulator of Vascular Smooth Muscle Cell Proliferation," and Aprotim Cory Bhowmik (right) of Lilburn for his entry, "Arterial Hemodynamics in Atherosclerosis Patients, a Mathematical Model." Aprotim took the American Physiological Society's first place award and third place for Intel's international medical and health sciences award. Vivek has earned his college undergraduate tuition by being named a Gates Millennium Scholar for 2012; he plans to attend the University of Georgia for pre-med.

For the past century, the Human Immunodeficiency Virus (HIV) known for the cause of AIDS, has been prevalent in the continent of Africa. But the question is why?! Why is there a huge concentration of infections in just Africa? Other undeveloped countries, for example in Asia, share similar political, economic, and even environmental statuses; then why didn’t an epidemic similar to this originate in these places?

A closer study of African history during the 1900s reveals that maize was a large part of the diet for subsistence farmers, and due to it being used for personal consumption, there was a lack of quality assurance. Even when maize started to commercialize around the mid to late 1900s, the practice of neglecting quality assurance continued, such as the failure to utilize fertilizers, pesticides, Federal Drug Administration (FDA) protection and various other control methods. This massive commercialization of maize is reported in Nick Wink’s and Johann Kristen’s article “Deregulation of Agricultural Marketing in South Africa”, where they discussed a 1980 record breaking harvest of maize of around 14.6 million tons. Due to these high levels of production, there was a massive exposure of mycotoxins into the African population. This group of toxins is produced by parasitic fungi and develops when production and storage conditions are not ideal, in this case they appeared in the form of aflatoxin and fumonisin.

One of the lead researchers in this area is Dr. Jonathan “Tim” Williams, a Senior Research Scientist at the University of Georgia-Griffin Campus and the director for the Peanut Collaborative Research Support Program (CRSP). According to Dr. William and his colleagues “these toxins are known to infiltrate other crops apart from maize, such as cassava, peanuts and rice.” But maize turned out to be more of a concern due to it having the largest harvests. In other words, the population with the higher corn consumption was exposed to higher levels of the toxin. “The research on these mycotoxins shows, that aflatoxin is known for the increasing risk of hepatocellular carcinoma (cancer of the liver), and fumonisin for the risk of esophageal carcinoma (cancer of the esophagus),” stated Dr. Williams. Furthermore, these toxins were noticed to have a strong correlation with immune suppression and it is this property which links maize consumption with a large percentage of HIV carriers in the African population by essentially facilitating transmissions of new infections and development of the virus once in a host where the body’s defense mechanisms have been compromised.

Dr. Williams and his team attempted to find a method of neutralizing these toxins even after the consumption of these infected crops so that neither the immune system nor the internal organs could be harmed. This research led to a finding that Bentonite, a type of clay that is commonly found in nature, has properties that absorb mycotoxins. Furthermore, Bentonite is an almost tasteless substance, so Dr. Williams and his team are working with adding it to various foods or toppings such as condiments and the various sauces so it could be incorporated into the lives of HIV carriers. Another potential method of administration is in the peanut and maize based baby food in Africa and since maize and peanut products are common ingredients in baby food, this employment could act as an antagonist against these toxins once they penetrate the body. “These applications of Bentonite were made, keeping in mind, the affordability of the commercial products for the African population,” said Dr. Williams. Research shows that these implementations could eliminate up to 1,000,000 transmissions of HIV annually in the continent of Africa, leading to a much better, environmental, economic and even political status quo.