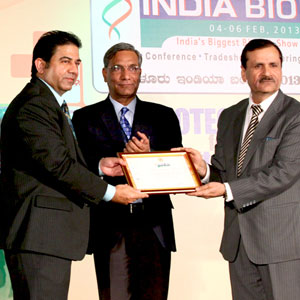 Ani Agnihotri, Founder and Managing Director, USIBRC, receives award at biotechnology conference in Bangalore for helping to link the states of Georgia (USA) and Karnataka (India).

Bangalore India Bio (BIB) has established itself as a confluence of the Biotech fraternity in India. This flagship 3 day event of the government of Karnataka began on February 4, 2013 and was attended by over 800 delegates. This event draws the attention of industry leaders, professionals, engineers, and engineering equipment manufacturers from India and abroad. The 13th meeting of BIB was inaugurated by Jagadish Shettar, Chief Minister, Karnataka. The event, organized by the Department of Information Technology, Bio-Technology, and Science & Technology (IT-BT-ST) of the Government of Karnataka and the Vision Group on Biotechnology, was held at the Lalit Ashok Hotel, Bangalore.

The Government of Karnataka and BIB 2013 presented a “Special Recognition Award” to Atlanta-based US India Business and Research Center (USIBRC), LLC. Since 2006, USIBRC has been working to connect Indian and U.S. organizations in the fields of health sciences, IT, advanced technologies, and education. USIBRC has organized three annual USA India Business Summits (UIBS) and one India’s Supply Chain Conference in Atlanta in the last three years.

The founder of USIBRC, Mr. Ani Agnihotri, is a proactive leader with business acumen and understanding of technology to convert “big picture” vision into implementable business plans. For his contributions in promoting U.S.-India business, Agnihotri was chosen by Atlanta Business Chronicle as a finalist for the 2010 Georgia Governor’s International Awards and also featured in the cover page story of Georgia Trend. In January 2011, Georgia Trend magazine named Agnihotri as one of the 100 Most Influential Georgians and has included Agnihotri as a Notable Georgian for the last 2 years.

Karnataka Biotechnology and Information Technology Services (KBITS) also signed MoU at Bangalore India Bio to fulfill the biotech industry’s needs with the Georgia Department of Economic Development. The institutions will explore collaboration with potential companies with university research and industry expertise to help train manpower. The MoU is an industry-driven instrument and the Government has taken the role of a facilitator. Ani Agnihotri of USIBRC was a catalyst in bringing this historic agreement signing between the two state institutions and was given the Award by Dr. H.P. Kumar, Chairman & Managing Director, NSIC at BIB.