A QUIZ FOR AUGUST 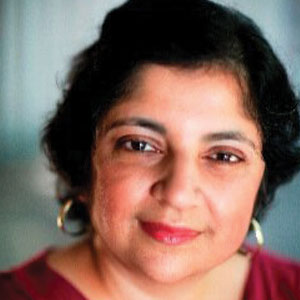 A QUIZ FOR AUGUST

1. Among the 38 recipients of the 2015 Great Immigrants Award from the Carnegie Corporation, journalist Madhulika Sikka and three men were the only Indian-Americans. Who among the following did not get this award?
(A) Preet Bharara (B) Abraham Verghese (C) Satya Nadella (D) Rakesh Khurana

2. Four Indian actors made it to the Twitter Top 100, with the number of their followers ranging from just over 15.6 million (rank 58) to just over 12.7 million (rank 84). Who holds the lead among the four?
(A) Shah Rukh Khan (B) Amitabh Bachchan (C) Aamir Khan (D) Salman Khan

3. Three Indian tennis players—Sania Mirza, Leander Paes, and Sumit Nagal—won doubles titles at Wimbledon this year. Where does Mirza, the first Indian to win a women’s doubles Grand Slam title, stand in the world’s doubles rankings for women?
(A) 10 (B) 8 (C) 7 (D) 1

4. India’s newest state, Telangana, was carved out of the old Andhra Pradesh last year. For the new Andhra Pradesh, what’s the name of the capital that will be built near the river Krishna?
(A) Vijayanagara (B) Amaravathi (C) Nagarjuna Nagar (D) Undecided

5. Charles Correa, who died this year at the age of 84, was India’s most notable architect. Known for the buildings he designed in India, Europe, and North America, his last major project— the Ismaili Center, completed in 2014—is found in which city?
(A) Toronto (B) Lisbon (C) Los Angeles (D) Dubai

8. Baahubali, a Telugu period film that was dubbed in Hindi, Tamil, and Malayalam, is on a winning streak, having broken box office records when it opened last month. Approximately how much did Baahubali—India’s most expensive film to date—cost?
(A) $19 million (B) $12 million (C) $100 million (D) $40 million

9. Amitav Ghosh’s Flood of Fire, the final novel in his Ibis trilogy, has just been released here. Ghosh hasn’t won the Man Booker or the Man Booker International, though he was shortlisted for both prizes and has won numerous other awards. Who did win the Man Booker Prize?
(A) Anita Desai (B) Rohinton Mistry (C) Vikram Seth (D) Kiran Desai

While Indian-Americans are not absent from national television, their presence—especially in news—is so low key that any growth in visibility is always newsworthy. Two anchors—Reena Ninan and Vinita Nair—and an executive, Bela Bajoria, gained prominence recently.

Ninan (right) is ABC News’ co-anchor (with T.J. Holmes) of World News Now and America This Morning. She joined ABC in 2012, following a stint at Fox News, and has reported extensively from hot zones in the Middle East and Asia. Recognized by Glamour magazine for her work as a war correspondent, she has also covered national politics and natural disasters. 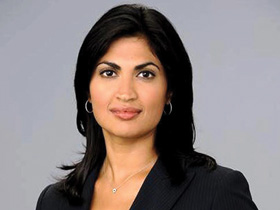 At CBS, Vinita Nair (left) is the co-host (with Anthony Mason) of its This Morning Saturday program. Nair previously worked at ABC, where she was a co-anchor of World News Now and America This Morning. 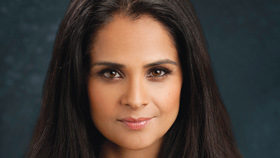 Bela Bajoria (right), not to forget NBC, has become the president of Universal Television, where in her previous role overseeing programming she had success with shows like Parks and Recreation, The Mindy Project, and Law & Order. Long before joining the TV world, Bajoria scored a hat trick on the beauty pageant circuit, winning the following titles: Miss LA India, Miss India USA, and Miss India Worldwide.

At PBS, meanwhile, Hari Sreenivasan remains the anchor of Newshour Weekend and a senior correspondent for the weekday news program.

CHAND AND HIS GARDEN 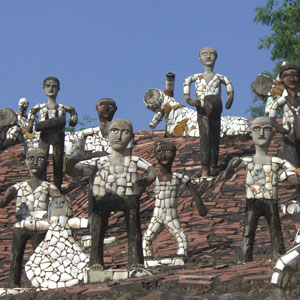 He was a self-taught sculptor, an early environmentalist, and a bold babu who initially displeased his employer, the Indian government. Nek Chand Saini died this year at the age of 90, but his legacy lives on in Chandigarh’s Rock Garden. Chand didn’t start out as somebody who enjoyed rocking the boat—and for the first 18 years, while working as a road inspector, he managed to build his 13-acre garden in secret. How? By picking a secluded gorge, which was off-limits, and by collecting discarded materials during his off-hours. Le Corbusier was the architect of Chandigarh, and when it was being built as a state capital, Chand had the chance to visit demolished sites, where he found kitchen and bathroom fixtures, bicycle tires and frames, broken glass, and other bric-a-brac.

Chand’s superiors, 40 years ago, finally realized what he was up to, and for a while he seemed to be in trouble. But his artistry—and audacity—saved him and the garden. Impressed by his sculptures (now numbering 2000), which were ingeniously constructed from all kinds of cast-off stuff, the government opened it officially in 1976, with Chand taking on a new paid role as the head of the Rock Garden. With the help of 50 employees, he extended the garden—with walkways and even a waterfall—to 40 acres. In the ’90s, the city neglected the garden and spiteful vandals caused damage. After a vigorous campaign saved the garden, it continues to thrive, drawing visitors from all over India.

He’s one of a kind. In his long journalism career, mostly at The Hindu, P. Sainath put rural reporting on the map and served as India’s only rural editor, covering issues that are often underreported (or overlooked) in the national press. Known for championing marginalized communities, Sainath—author of the widely studied Everybody Loves a Good Drought—has won numerous honors, including the Ramon Magsaysay Award. Now, after leaving The Hindu, he has stepped up his commitment with the launch of PARI, which stands for People’s Archive of Rural India. 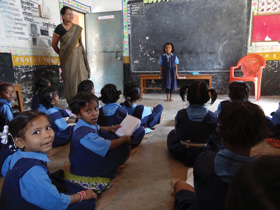 PARI is Sainath’s new passion, and the emphasis here is on multimedia storytelling at the grassroots level, with the goal of documenting and preserving the rural experience in India. You’ll find, for instance, a video tour of photos, taken by Sainath between 1993 and 2002, on the wide range of work done by women in rural India. Then there are interviews, video and audio stories (including investigative articles), photo features, and resources for research—all presented as a feast for the mind and heart.

Contributors include not just professional journalists and photographers but also the very people PARI wants to recognize and draw attention to for the multiple challenges they face.

Languages, traditions, and professions are disappearing in the era of globalization and modernization. Examples of endangered occupations include pottery, weaving, and toddy tapping, for which men sometimes climb heights greater than the Empire State Building.

A lot that’s unique about rural India could vanish in 20 to 30 years, Sainath points out, adding, “This portal talks about the everyday lives of everyday people, beginning with people like well diggers, snake catchers, betel planters, and artists in remote villages who are not yet discovered by the mainstream media.” 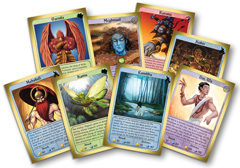 Two new card games have been inspired by India’s two best-known epics. But will digital natives hooked on digital thrills warm up to old-fashioned card games based on ancient myths and legends? The creators, based in India and Singapore, are betting on it. After all, aren’t mythological stories and games set in ancient worlds popular these days? Mobile versions may be available, but the idea here is to make kids go offline for fun.

Brothers Arnav and Aditya Mukherjee, who founded TOKO Innovation Studios (TIS) last year, turned to the Ramayana for their collectible card game for children aged 7 years and up. Called Astra, the game involves using various characters—some from the epic, others fictional—to prevent archenemy Ravana from accumulating astras or divine weapons. In the other case, Singapore-based Vansh Games turned to the Mahabharata to create the Legend of Vyas. This game, also available in a mobile version, lets individual players assume the roles of characters like Arjuna and Karna to outmaneuver the enemy. Each player starts out with 40 points, and the aim is to reduce the opponent’s tally to zero.

Another goal of the games, of course, is to create greater interest in the grand epics.