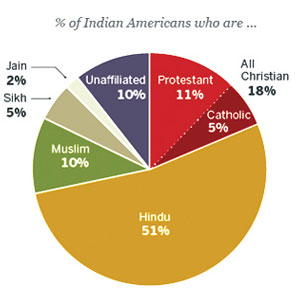 Well, according to the study, “the vast majority of Buddhists (75%) and Hindus (90%) say there is more than one way to interpret the teachings of their religion. By contrast, Asian-American Protestants—particularly evangelical Protestants—are more inclined to believe their religion is the one, true faith leading to eternal life.” Most Buddhists (79%) and Hindus (91%) reject that idea and say that many religions can lead to eternal life or enlightenment.

Though Christians make up only 3% of India’s population, 18% of Indian-Americans are thought to be Christian. The reason? Indian Christians tend to be well educated, and they migrate in disproportionate numbers. Note: Muslims (4% of U.S. Asians) weren’t included because the number wasn’t high enough for a separate analysis.