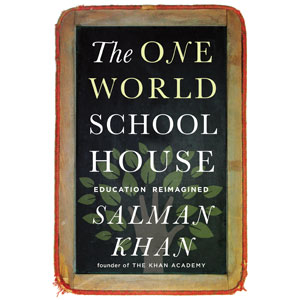 Salman Khan, author of The One World Schoolhouse: Education Reimagined (Twelve Books), needs no introduction, even though he has nothing to do with Bollywood. Named one of Time magazine’s “100 Most Influential People in the World” in 2012, he is the founder of Khan Academy, a virtual university reaching five million unique visitors every month. Over 15,000 classrooms in 234 countries use the lessons and software produced by the academy. How did this nonprofit, incorporated only in 2008, become such a phenomenon in a short time? The answer, simply put, is “Teaching” with a capital T. “I wanted to teach the way I wished that I myself had been taught,” Khan writes. “Which is to say, I hoped to convey the sheer joy of learning, the thrill of understanding the universe.” Eschewing a top-down model with its narrowly defined classrooms, Khan advocates a creative and more accessible, flexible approach. He points out, among other things, why learning and credentialing should be separate. Khan, who has an MBA from Harvard and three degrees from MIT, worked for a hedge fund before turning to education. 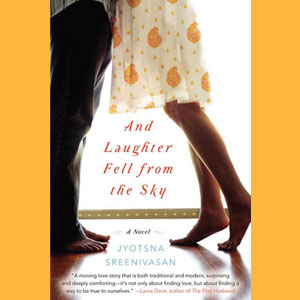 And Laughter Fell from the Sky (William Morrow) is Jyotsna Sreenivasan’s debut novel for adults. She focused on children’s fiction previously, and also wrote three nonfiction books, including one on the activist Ela Bhatt. For her novel, Sreenivasan drew inspiration not only from her experiences as a daughter of Indian immigrants, but from The House of Mirth, a novel by Edith Wharton. The character Lily was fascinating and frustrating because “her situation—the need she felt to fit into her society by marrying the right kind of person—seemed so similar to the situation faced by many Indian-Americans,” writes Sreenivasan, adding, “So, I wanted to explore a Lily-type character who is a modern-day Indian-American woman.” Enter Rasika. This dutiful daughter agrees to go along with her family’s plans for her, although she is accomplished and financially independent. That changes when she reconnects with Abhay, an old family friend. They seem to have little in common, but Rasika is attracted to him. Sreenivasan created an online Gender Equality Bookstore and a website called SecondGenStories. 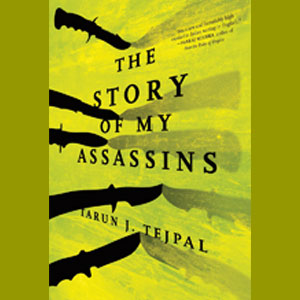 In Tarun Tejpal’s The Story of My Assassins (Melville House), five assassins are out to get the narrator, who is an India-based investigative journalist and a philanderer. He has no problem, and is even pleased, when his mistress comes to the defense of the assassins. Why? Because the narrator’s mistress, who sees the assassins as mere pawns in a larger dirty game, becomes more amorous when she is drawn to another passion—activism. This may sound bizarrely funny. True, it’s fiction, but the broader outlines of the story were inspired by Tejpal’s own experiences as a muckraking journalist and founding editor of Tehelka, a newsweekly. Known for its explosive exposés of corruption and criminality in India, Tehelka almost went out of business due to pressure from high places. But it survived, with vigorous public support, and continues to thrive under the editorship of Shoma Chaudhury. As for Tejpal’s latest novel (his second), it is “a masterful account of 21st-century ambition, inequality, and power from one of India’s most fearless writers,” according to author Katherine Boo. 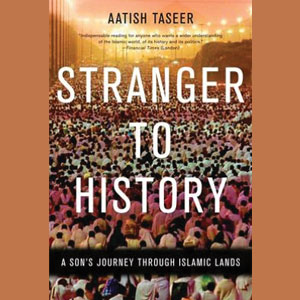 Aatish Taseer’s Stranger to History: A Son’s Journey Through Islamic Lands (Graywolf Press) finally gets its well-deserved release in the U.S. Earlier, it was published to acclaim in India and the U.K. He is the son of Indian journalist Tavleen Singh and the late Salmaan Taseer, a Pakistani governor who was murdered last year because of his opposition to blasphemy laws targeting minorities. Aatish Taseer’s journey from Turkey and Saudi Arabia to Iran and Pakistan is more than a travelogue. It’s a memoir, even a quest to understand his complex heritage straddling two religions and two nations. He reflects on his troubled relationship with a largely absent father, and his attempts to reconcile with him. “My aim was to tie together the two threads of experience from that summer: the new, energized Islamic identity working on young Muslims and my own late discovery of my father’s religion,” Taseer writes. The book was finished well before his father’s untimely death, but it ends with another tragic event: the assassination of Benazir Bhutto. His novels are titled The Temple-Goers and Noon.