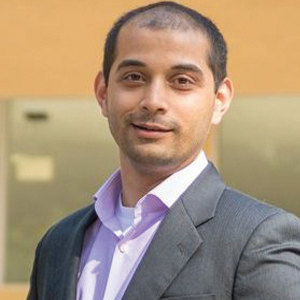 Gaurav Sant, who teaches civil and environmental engineering at UCLA, headed the first university team to win the top prize in the NRG COSIA Carbon XPRIZE global competition. The UCLA Carbon Built team has received $7.5 million for technologies related to coal-fired power generators. Carbon dioxide emissions that would have escaped into the atmosphere are absorbed by specially formulated concrete blocks. 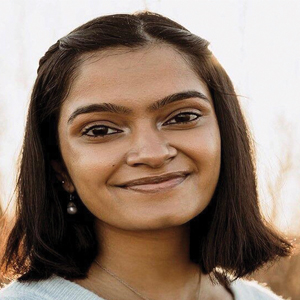 Kruttika Gopal is the only Indian-American among the 55 college students chosen as Udall Scholars this year. They were picked for their commitment to careers in the environment, Tribal public policy or Native health care; leadership potential; record of public service; and academic achievement. Gopal, who is from Connecticut, focuses on environmental studies (major) and political science (minor) at American University. 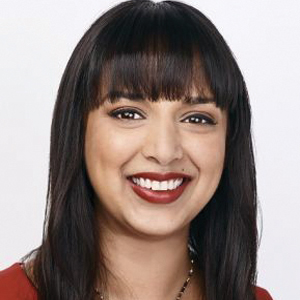 Versha Sharma has been named editor-in-chief of Teen Vogue, a fully digital Conde Nast publication. Alexi McCammond, her predecessor, didn’t last long in the job when controversial tweets from her teen years resurfaced. Sharma won an Edward R. Murrow Award for a short documentary on the aftermath of Hurricane Maria in Puerto Rico. The Louisiana native was previously the managing editor of NowThis, a digital news outlet. 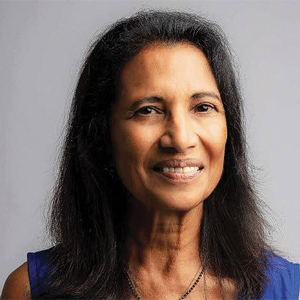 Shakuntala Haraksingh Thilsted, winner of the 2021 World Food Prize, has been recognized for her work on nutrition, fish and aquatic food systems. Her research has shown how locally available fish in developing nations can provide life-changing benefits at an early age. A native of Trinidad, with ancestral roots in India, she’s a citizen of Denmark. The prize, now worth a quarter-million dollars, was established in 1987. 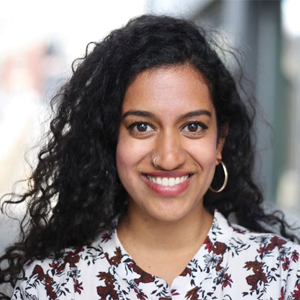 Varshini Prakash is the latest recipient of Dickinson College’s annual Rose-Walters Prize for Environmental Activism. Prakash is executive director of the Sunrise Movement, a grassroots organization made up of young people who are tackling climate change without neglecting job creation. Prakash, who gets $100,000 to promote her goals, will serve as a resident advocate at the college for the upcoming academic year. 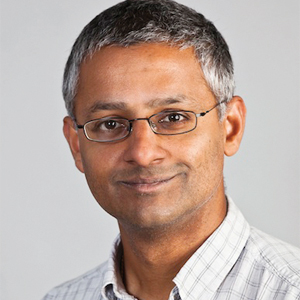 Shankar Balasubramaniam and David Klenerman, both of Cambridge University, won the 2020 Millennium Technology Prize. Awarded every two years by Finland for innovations that improve our lives, it’s worth one million euros. The two chemists were recognized for their Next Generation DNA Sequencing (NGS) technology, which enables large-scale and cost-effective genome sequencing that’s fast but accurate. 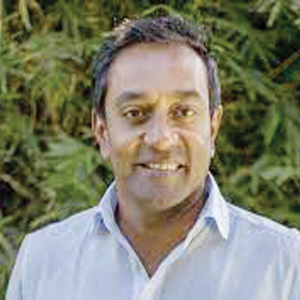 M. Sanjayan is the CEO of Conservation International, which highlights and secures the critical benefits of nature. It has helped to protect over 2 million square miles in more than 70 countries. Sanjayan, whose interests range from genetics to wildlife migration, has overseen the U.S.-based nonprofit’s $1.1 billion capital and brand campaigns, and he’s involved in making documentaries for TV channels like PBS, BBC and Discover. 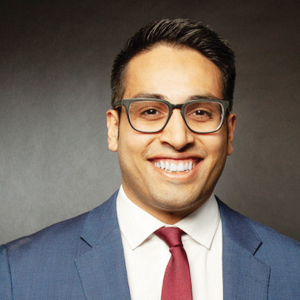 Saagar Enjeti is a rising conservative on The Hill’s Rising with Krystal & Saagar. While he’s a Republican with populist views, Krystal Ball, his co-host on this daily news and opinion web series produced by the D.C.-based political newspaper, is a Democrat with progressive views. They have co-written a book, and their show, available on the paper’s web platform and YouTube since 2019, has over a million subscribers. 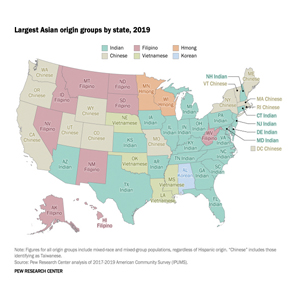 “Indian-American” implies an identity that fuses two selves, though the hyphen is increasingly optional. But apart from ancestral ties, and ties to this country as residents and citizens, there’s another connection that’s worth noting. Indian-Americans are also Asian Americans, who have made impressive strides over the past two decades. Their power in the polling booth, both at the national and state levels, has become abundantly clear in recent years. And given the rise in anti-Asian hate crimes, it’s also clear why Indian-Americans have to show more solidarity with the larger Asian American community, and offer their support during this difficult time.

Asian Americans are the fastest-growing racial or ethnic group in the U.S. electorate, according to the 2020 census figures. Propelled by immigration, they grew by 81 percent in the last two decades, going from to 10.5 million to 18.9 million, according to a Pew Research Center analysis. Among the five biggest Asian groups in the nation (Chinese, Indian, Filipino, Vietnamese and Korean), Indian-Americans experienced the largest growth (142 percent) in the last twenty years, although the Chinese have maintained their lead in population (5.4 million). But Indian-Americans have held on to the second spot (4.6 million). While 45 percent of Asian Americans live in the West, their presence in the South (now at 24 percent or 5.3 million) is growing rapidly. In the Southeast and Midwest, Indian-Americans form the biggest Asian group. 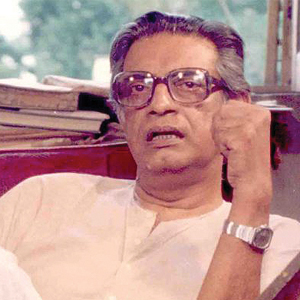 Satyajit Ray, born 100 years ago, became famous in the 1950s when the Apu Trilogy launched his illustrious film career. But he thought Charulata was his most accomplished movie. Many fans, including the author and screenwriter Ruth Prawer Jhabvala, agreed, though one could also make a strong case for a few of his other films. His last movie, Agantuk, was released three decades ago. The only Indian director to win an Oscar, Ray received his honorary Academy Award for lifetime achievement in 1992, shortly before his death. The Indian government honored him with the Bharat Ratna, its highest civilian award, the same year. Now it has instituted the Satyajit Ray Lifetime Achievement Award for Excellence in Cinema, to be given every year at the International Film Festival of India (IFFI). Besides a cash award of one million rupees, the award includes a Silver Peacock medal and a scroll.

Ray was inspired by Rabindranath Tagore—not surprising, given Ray’s stint at Shantiniketan as a youth. The following movies by Ray were based on the Nobel laureate’s stories: Charulata, Ghare Baire and Teen Kanya (in which a young Sharmila Tagore made her debut). Soumitra Chatterjee, who died last year, starred in many of his films. Shatranj Ke Khilari was the first of only two Hindi films by Ray, the other one being Satgati, based on a story by Premchand. Films such as Jalsaghar, Mahanagar and Aranyer Din Ratri also received an enthusiastic international reception. Ray, who wrote children’s literature as well, was known for his Feluda detective stories. Reflecting on his craft, he said, “In cinema, we must select everything for the camera according to the richness of its power to reveal.” 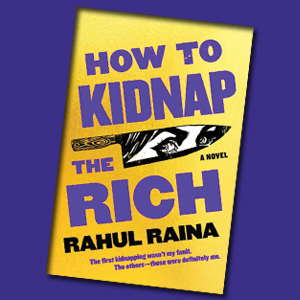 How to Kidnap the Rich (Harper Perennial) – by Rahul Raina. Looking for an entertaining crime caper this summer? Raina’s debut may be just the ticket, immersing you in a story that seems like a cross between The White Tiger and Slumdog Millionaire. Raina’s novel, inspired by the U.S. college admissions scandal, also involves kidnapping, a propulsive journey across the teeming, class-riven society of India’s capital, and love. Ramesh Kumar, poor and from Old Delhi, is street and book smart, enabling him to excel in India’s highly competitive college entrance exam. So he becomes a consultant (rather, a conman) and helps rich kids like Rudi by impersonating them. The author, not yet 30, moved to the U.K. as a child, and he runs a company forges connections between British and Indian businesses. Riz Ahmed’s production company has bought the rights for an HBO series based on the novel. “The first kidnapping wasn’t my fault,” Ramesh Kumar says, wasting no time as the narrator. “The others—those were definitely me.” 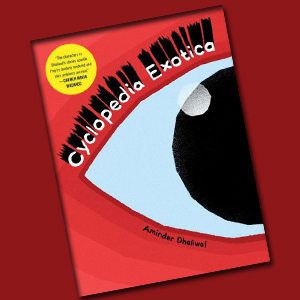 Cyclopedia Exotica (Drawn and Quarterly) – by Aminder Dhaliwal. In this timely graphic novel, Dhaliwal addresses a serious issue with a light touch. And if it makes the reader squirm, that’s the point. What does the “othering” gaze of the dominant community feel like for a visible minority? Born in Britain, Dhaliwal moved to Canada with her family when she was 11. Having lived through a period when the long shadow of 9/11 loomed over brown people, she can relate to what Asian Americans are going through now. In her book, the minorities are cyclops who have just one eye—and they fascinate, arouse and infuriate the two-eyed, who can’t stop obsessing over them. “As the immigrant cyclops navigate their world, Dhaliwal uses humor and spot-on cultural references to address themes of race, xenophobia, beauty ideals, and our desire to belong,” Quill & Quire points out. Based in Los Angeles, Dhaliwal has worked at Disney TV Animation and Cartoon Network, and on a show titled Sanjay and Craig. 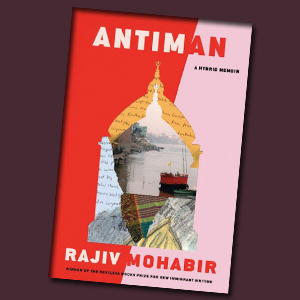 Antiman: A Hybrid Memoir (Restless Books) – by Rajiv Mohabir. This book by the winner of the 2019 Restless Books Prize for new immigrant writing comes out in June. Suitably, the memoir reflects Mohabir’s multifaceted identity, which can be traced to five countries: Guyana, Britain, India, Canada and the U.S. Rather than a traditional narrative, Mohabir’s book is a mix of linear prose, poetry in different forms, transcriptions of myths, and translations of family lore passed on by his indentured ancestors. It’s a community memoir, not just a personal story, that “tackles questions of caste, ethnicity, and sexuality, spinning tales of tenderness and ignorance, of love and of longing for that mysterious place called home,” according to the prize’s judges. “Antiman,” as Mohabir explains, is a Caribbean slur for a gay man. But it’s a slur that Mohabir embraces as he traces a story of constant migration, displacement and triumph over adversity. Besides English, Creole and Guyanese Bhojpuri inform the work of Mohabir, who teaches poetry at Emerson College. 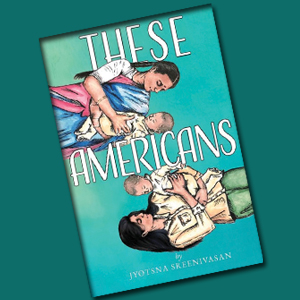 These Americans (Minerva Rising) – by Jyotsna Sreenivasan. The author of And Laughter Fell from the Sky, a well-received novel, Sreenivasan has come out with a collection of stories. It includes a novella, “Hawk,” in which an Indian-American physician, after a distinguished career, finds that she’s the one who needs help. Alzheimer’s is changing her, but the story, in which the doctor looks back, is also about prejudice and her changing relationship with her daughter. Some of the other stories in this collection shed light on an era when South Asians were a novelty in this country. The culture shock was mutual. In “Mirror,” set in the late 1960s, when Prema is admitted to an Ohio hospital, a male doctor shows up to deliver her baby. The collection, which one author described as “a quietly tender—and occasionally hilarious—meditation on life, family, and immigration,” won the Rosemary Daniell Fiction Prize.