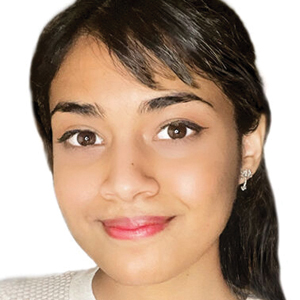 Archana Podury is one of the 30 Soros Fellows this year. Chosen from 2445 applicants, they are either immigrants or children of immigrants. Now in the Harvard-MIT Health Sciences and Technology program, Podury is interested in combining computational and social approaches to neuropsychiatric disease. California-born Podury will receive up to $90,000 over two years to complete her M.D. in medicine at Harvard University. 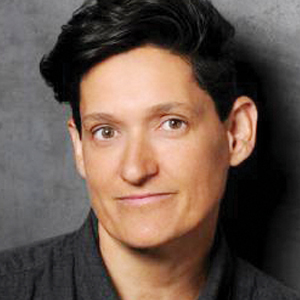 Lochlann Jain, an anthropologist at Stanford, is among the 184 Guggenheim Fellows this year. His interests include extra-legal forms of communications, queer studies, art and design. Other South Asian American winners: Debarati Sanyal, who teaches French at UC Berkeley; Arjun Dey, an astronomer; Priyanga Amarasekare, a professor of ecology and evolution; and Suhas Diggavi, an electrical and computer engineer. 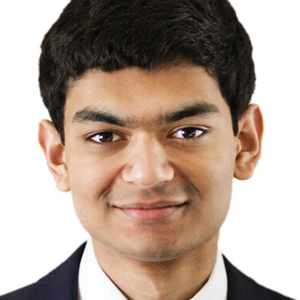 Ashwin Sah is also a Soros Fellow, and the award will support his work towards a Ph.D. in math at MIT. Oregon-born Sah, a Goldwater Fellow as well, received the Frank and Brennie Morgan Prize in math. Sah focuses on varied areas of combinatorics and discrete math, and has written about diagonal Ramsey numbers. Other 2021 Soros Fellows include Sita Chandrasekaran, Syed Mahmud Raza Rizvi and Pooja Chandrasekar. 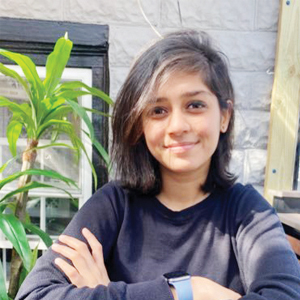 Sumitra Badrinathan, along with Devesh Kapur and Milan Vaishnav, did an attitudes survey. They found that Indian-Americans tend to be more conservative on issues affecting India than on issues affecting the U.S. Respondents are “nearly evenly split” on how they see India’s trajectory, and expressed concerns about corruption and economic growth. A bare majority of Indian-Americans support the current Indian government. 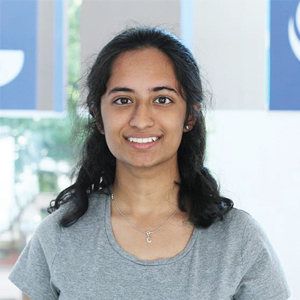 Chetna Batra, a biology major in the Honors College at GSU, Atlanta, has been chosen as one of the 410 Barry Goldwater Scholars this year. She’s a Georgia State Presidential Scholar as well and a research assistant in the Nazarko Lab. Shovan Bhatia and Pradyot Yadav, engineering majors at Georgia Tech, are also among the over 30 Indian-American Goldwater Scholars who received $7500 each to pursue STEM research. 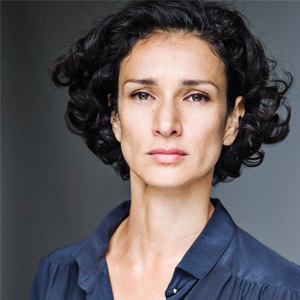 Indira Varma, a British Indian actress who has appeared in Bride and Prejudice and Kama Sutra: A Tale of Love, among other movies, is joining the cast of Star Wars: Obi-Wan Kenobi, a new Disney+ series. The busy actress, who is presently starring in the ABC drama series For Life, is also joining the cast of Mission Impossible 7. Varma, a graduate of the Royal Academy of Dramatic Art, started out as a theater actress in Britain. 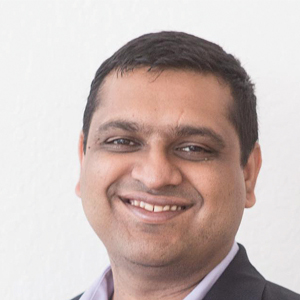 Deepak Sekar, looking for a convenient way to customize salads and keep them fresh, turned to Sally. That’s a salad-making robot in the form of a vending machine, which Chowbotics introduced in 2014. Chowbotics, founded by Indian-born Sekar, has now been bought by DoorDash, the online food ordering company. In a restaurant environment transformed by Covid-19, the attraction of Chowbotics seems obvious. 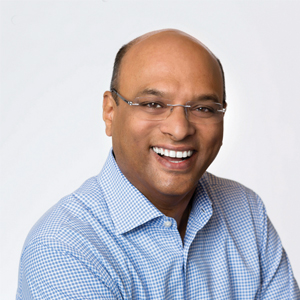 Shashank Samant is the CEO of GlobalLogic, a San Francisco-based digital engineering firm with over 20,000 employees spread across 14 nations. Founded in 2008 and purchased by Hitachi last month, it generates more than $1billion in revenue annually and is known for helping Fortune 500 and Fortune 1000 companies realize their digital goals. Samant has also held leadership roles at IBM, Citicorp and HP. 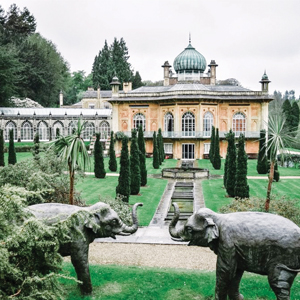 When mass tourism resumes, a trip to Cairo will be incomplete without a visit to the newly restored Baron Empain Palace. Egypt spent $11 million to restore this Hindu-inspired palace, which was built in the first decade of the 20th century. Then came the pandemic, delaying its reopening last year. Such a palace on the banks of the Nile may seem improbable, but the world has seen similar examples of cross-cultural creations. Often, these architectural marvels are the result of an idiosyncratic vision. Edouard Empain, a Belgian engineer and baron, was inspired by the temples in India, especially Odisha, and the Angkor Wat complex in Cambodia. While the architect Alexandre Marcel used a mishmash of styles, the Hindu and Buddhist influences are apparent in the temple-like tower and the carved figures adorning the periphery. One striking sculpture depicts the mythical Yali, which is part-lion, part-elephant and, sometimes, part-horse.

Another cross-cultural example is the Sezincote estate in the Cotswold countryside of Britain. Here, the Indian influence can be traced to Rajasthani palaces—and though the building is not huge, the splendid gardens, with two elephant figures in the foreground, make Sezincote a favorite setting for weddings. The Islamic influence is seen in the onion-shaped Mughal dome, while the small Surya temple showcases the Hindu influence in an understated manner. Charles Cockerell, who had been with the East India Company, inherited the estate after his brother’s death. He turned to another brother, architect Samuel Pepys Cockerell, who designed the gardens. There are two of them, formal and informal, and they’re popular for pictures. Only half a dozen weddings are allowed every year at Sezincote, which inspired the Brighton Pavilion.

THE SAGA OF INDIA’S CHINESE RESIDENTS 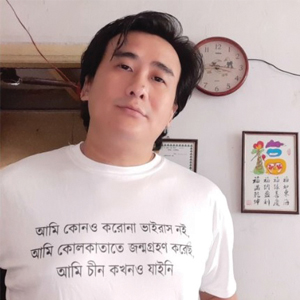 The Indo-China war took place almost half a century ago, but for the older Chinese still living in India, last year’s tensions between the nations must have evoked painful memories. Thankfully, the conflict was contained. But also in 2020, unfortunately, the coronavirus pandemic gave rise to ugly prejudice, as we’ve seen in this country as well. While India’s East Asian population is tiny, Indians from the Northeast are sometimes seen as foreign. In March of last year, Francis Yee Lepcha (above), an Indian singer of Chinese and Sikkimese descent, found a novel way to combat the hostility and racism he and his family faced on a trip to Puri. An Indian family loudly objected when the Lepchas checked into a hotel, and taunts of “corona” followed them on the beach. This searing experience, which continued on the train, prompted Lepcha, who speaks fluent Bengali, to make a T-shirt that reads, “I’m not some coronavirus. I was born in Kolkata and have never been to China.” It went viral, and many horrified Indians offered their support.

An infamous 1962 episode during the Indo-China war was reminiscent of the internment of Japanese-Americans during World War Two. About 3000 Chinese-Indians (mostly of Hakka descent) were summarily rounded up and sent to an internment camp in Deoli, Rajasthan, where some stayed, astonishingly, for five years. Writers Jo May (now a U.S. citizen) and Dilip D’Souza tell their harrowing story in The Deoliwallahs, published last year. Ma, who was born in the internment camp, interviewed some of the survivors. A big group of internees left on three ships sent by China, but many others emigrated to the West after their release from the camp. 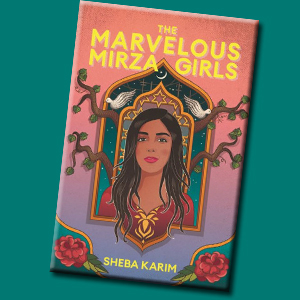 The Marvelous Mirza Girls (Quill Tree Books) – by Sheba Karim. Published by a new HarperCollins imprint, Karim’s latest young adult novel takes readers to India’s vibrant, polluted capital. The period is BC (Before Covid), but what makes the novel oddly timely is that the protagonist Noreen is taking a gap year, as many high school graduates have done this year. Her guide is a charming filmmaker named Kabir, and that means Noreen’s interest goes beyond tourist attractions like the Mughal monuments, though she enjoys those as well. But things get serious when Kabir’s writer father is accused of sexual misconduct. Noreen is drawn deeper into their lives as the novel “takes an unflinching look at poverty and complicity, sex and religion, without ever losing sight of what it is: family drama, rom-com, travelogue,” according to author David Arnold. Karim, a graduate of NYU Law School and the prestigious Iowa Writers’ Workshop, also wrote That Thing We Call a Heart, Skunk Girl and Mariam Sharma Hits the Road. 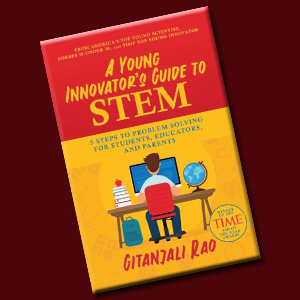 A Young’s Innovator’s Guide to STEM (Post Hill Press) – by Gitanjali Rao. Having famously made it to the cover of Time magazine, Gitanjali now offers “5 steps to problem solving for students, educators, and parents” in her book. Unsurprisingly, there’s plenty of interest in this gifted teen’s advice, which she outlines in three, easily digestible sections: Discover, Solve and Implement. By talking about her journey as a budding scientist, she shows how patience and persistence are important. Her best ideas come to her when she’s engaged in ordinary tasks, such as eating pasta. Just 9 when she heard about the Flint water crisis involving lead, Gitanjali spent time and effort on it before she got the idea for carbon nanotube sensor detection. Besides reading and researching, she followed the guidance of mentors. Sticking to the same arduous process, she developed Epione to diagnose prescription opioid addiction, and Kindly to prevent cyberbullying. 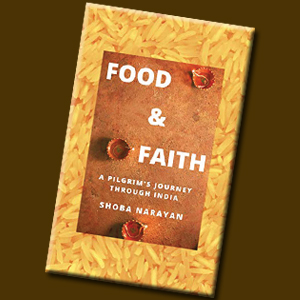 Food and Faith: A Pilgrim’s Journey (Jasmine Books) – by Shoba Narayan. Originally published by HarperCollins India, this book charts Narayan’s pre-pandemic travels through India as a spiritual seeker. Starting as an exploration of Hindu pilgrim sites and sacred food (prasad), it evolved into a broader look at India’s sacred spaces and their place in people’s lives and society. Food remains the link, and the book is as much about India’s culture and cuisine as it’s about religion. From Udupi, Narayan headed to Banaras, Ajmer, Madurai, Palani, Goa, Mumbai, Jaipur, Amritsar and Puri, among other places. She couldn’t cover Christianity, Zoroastrianism and Jainism, though she did visit their houses of worship and talk to experts, hopefully for another book. Narayan, eschewing the atheism of her youth, is a believer—but she retains her secular values. “All religions share broad strokes,” she notes. “They talk about developing courage, character and tenacity to cope with the ups and downs of life. Faith, at its best, is about giving strength and succor.” 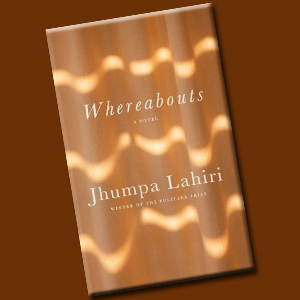 Whereabouts (Knopf) – by Jhumpa Lahiri. Audacious in Italian is audacia. It’s the right word to describe what this much-honored author did at the peak of her literary career. Turning away from English, the language that brought her fame as a fiction writer, Lahiri began writing in Italian, which she learned only as an adult after falling in love with it. In Other Words, her book in Italian, talks about that journey and her relocation to Rome with her family for a total immersion. Now Lahiri is out with her first Italian novel, which she wrote and then translated into English. A melancholic, not-so-young Italian woman who is single narrates the story of her wanderings and encounters. It reads like autofiction. “There’s no food in my refrigerator, so I head to the supermarket, where I bump into my married friend, for whom I represent . . . what, exactly?” she says at one point. “A road not taken, a hypothetical affair?” Publishers Weekly gave the novel a starred review.