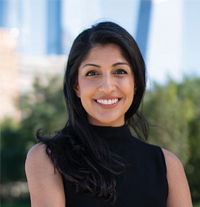 Anjali Sud is the CEO of Vimeo, a leading video platform for professionals and businesses everywhere. Before getting the top job three years ago at Vimeo, where she oversees a global team of 500 employees, she was the company’s general manager and head of marketing during a period of rapid expansion. A graduate of Wharton and Harvard Business School, Sud has also worked at Amazon and Time Warner. Niren Chaudhary, the CEO of Panera Bread since last year, is among those who are showing how pick-up service is evolving. The company has extended the range of Wi-Fi service offered in its restaurants. That has allowed it to add geofencing, which means customers who choose opt-in when they use the app won’t have to go in or call. The restaurant is automatically notified when the car pulls up to the curb. Rohit De, an associate professor of history at Yale University, is one of 27 winners of the 2020 Andrew Carnegie Fellowship. A legal historian who studies South Asia, postcolonialism, and the role of lawyers in politics, he receives $200,000 to support his research. His book on India is called A People’s Constitution. While the MacArthur Fellowship is referred to as the Genius Grant, this one is called the Brainy Award!

Ruchika Tomar won the 2020 PEN/Hemingway for Debut Novel for A Prayer for Travelers, which was published last year by Riverhead. The prize is worth $25,000 and includes a month-long residency in Wyoming. Set in Nevada, this “desert-noir” involves two young women who are traveling in the western U.S. When one woman disappears, following an act of violence, her friend sets off on a perilous journey to find her.

​Azmat Khan, the daughter of Pakistani immigrants, is the Future of War Fellow at New America and an investigative journalist who has reported on the myths and human costs of war. She is another 2020 recipient of the $200,000 Carnegie Fellowship. She also teaches journalism at CUNY and Columbia University. Her honors include the National Magazine Award, the Hillman Prize, and the Daniel Pearl Award.

Sudarsanam Babu, who is with the Oak Ridge National Laboratory, TN, is also a professor at the University of Tennessee, where he teaches mechanical, aerospace, and biomedical engineering. He has been appointed to the National Science Board (NSF) for a six-year term. Two other Indian-Americans—Suresh Garimella of Vermont and Sethuraman Panchanathan of Arizona—are already serving as NSF board members. ​Cheetie Kumar, after being named a 2020 James Beard finalist for Best Chef (Southeast), was quoted as saying that, given the ongoing impact of Covid-19 on the restaurant industry, the award announcement felt “extra surreal.” Also a musician with a rock band, Kumar is the owner of Garland, an Indian fusion restaurant in Raleigh, North Carolina. Born in India, she moved to the U.S. as a child and grew up in New York. Sonia Shah, an award-winning science journalist, is out with a new book called The New Great Migration (Bloomsbury), which challenges widely held assumptions about migration. Based on science, history, and reporting, her book is a warning about climate change, just as her earlier book, Pandemic, was a warning about what we are living through. In that book she talks about tackling contagions like Ebola and Cholera.

The Second World War ended 75 years ago. Today, while physical travel is restricted because of Covid-19, online travel is not. We can visit museum websites, dip into digital archives, go to virtual libraries and galleries, and listen to oral histories. Curious about the Indian National Army and Subhas Chandra Bose, the rebel leader who died in 1945? The British Library is a good source. And in India, though Amritsar’s Partition Museum hasn’t reopened yet, some exhibits can be viewed on their website. In Britain, you can go to the BBC website for Kavita Puri’s collection of oral stories from British Indians who lived through the subcontinent’s partition. Stateside, you can immerse yourself in the 1947 Partition Archives, where you’ll find both video and audio stories of people who witnessed the division of India. This collection of 7250 narratives, put together by executive director Guneeta Singh Bhalla and her team, has an interactive map that lets you explore personal accounts and migration routes.

Then there is Aanchal Malhotra, who along with Navdha Malhotra founded the Museum of Material Memory. Inspired by Aanchal’s MFA thesis (“Remnants of a Separation”) on the material remains of Partition, the museum traces “family history and social ethnography through heirlooms, collectibles, and objects of antiquity.”

For a long time, India’s contributions to the Second World War were glossed over. But today there is
greater awareness, thanks in part to the efforts of writers like Yasmin Khan and Raghu Karnad. Even
Russia, it was reported, will pay tribute to Indian soldiers with an exhibit at the Museum of the Great
Patriotic War in Moscow.

FAVORITE FOOD ITEMS OF THE GIRMITIYAS What do Bunny Chow, Doubles, Dholl Puri, and Gulgula have in common? Krishna Gubili, who recently asked this question on social media, had this answer: Sugar Indenture. Gubili should know, having written a book about his great-grandfather, who had gone to South Africa in the 19th century to work as an indentured laborer on a sugar plantation. Those workers, who endured brutal conditions for low pay, called themselves
girmitiyas, an Indianized take on “agreement” (girmit), which was the exploitive labor contract they had with their employers. For five hard years, they were literally prisoners—and if they wanted their employers to pay for the return passage to India, they had to sign up for five more years. Most girmitiyas chose to stay.

This system of servitude began in 1838, following the collapse of slavery in the British colonies, and was abolished only in 1917. But the migration of Indian laborers continued for a couple more years, and Fiji was the last place to stop it, making 2020 the true anniversary of the indenture system’s end. Altogether, during that period, 1.2 million Indians were sent to South Africa, Fiji, Mauritius, Trinidad & Tobago, Guyana, Suriname, Kenya, Uganda, Tanzania, Mozambique, and Malawi. Their descendants, forming a vibrant diaspora of 12 million, have a distinctive cuisine. Which brings us to Gubili’s question. Gulgula, an Indian version of banana fritters, comes from Fiji. Bunny Chow (or bunny), a roll filled with curried vegetables and meat, is a South African Indian specialty. Doubles, a chickpeas sandwich that includes two baras made with dough, is popular in Trinidad. Dholl Puri, curried vegetables and pickles in a wrap that uses yellow split peas, comes from Mauritius. Indian Sun: The Life and Music of Ravi Shankar (Hachette) – by
Oliver Craske. This comprehensive biography (well over 600 pages) was timed to coincide with the maestro’s 100th birth anniversary this year. While the book will appeal
most to hardcore music buffs, casual listeners won’t be intimidated: Craske takes pains to make Indian classical music accessible. Although Shankar was a much-admired pioneer who managed to put Hindustani music on the world map, he also attracted criticism and controversy. Craske tackles it all. Both a leading traditionalist and an innovator, Shankar’s larger-than-life public persona was, Craske notes, “the ‘Godfather of World Music,’ as George Harrison labeled him, or the ‘part-sadhu, part-playboy,’ as India Today once called him.” Craske, who worked with Shankar on his autobiography (Raga Mala), spent six years on this official biography, researching in archives and conducting 130 interviews on three continents. Latitudes of Longing (One World) – by Shubhangi Swarup. Besides winning the Tata Literature Live! Award for debut fiction, this novel was shortlisted for the JCB Prize for Indian Literature, and longlisted for the DSC Prize for South Asian Literature and the International Dublin Literary Award 2020. The environment looms large in these inventive stories that include talking trees, among other marvels, as readers encounter scientists, octogenarians, even a yeti. The four linked sections are titled Islands, Faultline, Valley, and Snow Desert. The names of the characters— Chanda Devi, Plato, Thapa, Bebo, Apo, Ghazala, Rana—are just as evocative. “This daring novel, gloriously lyrical but excitingly precise, and steeped in the flora, fauna, history, and politics of that enthralling region between the Andaman Islands and the Tibetan plateau, gives us the sweep of human drama among astonishingly rich natural and geographical complexity,” notes Ruth Padel.

American as Paneer Pie (Alladin) – by Supriya Kelkar. In her previous middle grade novel, Kelkar showed how a young Sikh boy, Harpreet Singh, dealt with prejudice in small town America. In this novel, Kelkar revisits the subject through the eyes of a young Indian-American girl, Lekha, who feels the pull of two worlds. But while she enjoys Indian food and likes Bollywood films, she seems to be a typical American girl. What shifts her perspective somewhat is another girl, Avantika, a recent
immigrant from India. She’s Indian in a way that Lekha cannot be, although they become friends. When an ugly incident causes turmoil in their small town, will they take a stand and strengthen their bond? The book “addresses important issues of racism, colorism, and xenophobia through a well-drawn narrator whose political evolution is fascinating to watch,” according to Kirkus. Kelkar is on a roll. In 2021, she will bring out two new titles: a picture book called Bindu’s Bindis and a middle grade novel called That Thing About Bollywood. The Story of Yoga: From Ancient India to the Modern West (Hurst) – by Alistair Shearer. In a book that Shashi Tharoor calls “exceedingly accessible and engaging,” Shearer, a British author who has translated the Yoga Sutras of Patanjali and the Upanishads, takes readers on a journey across cultures, time, and continents. Rather than a how-to guide for practitioners, it’s a how-come book that will help one understand why yoga today is a $25 billion-a-year industry. And it will also show what happens, for good or bad, when ancient teachings are adapted for the modern environment. Shearer is the cofounder of an award-winning retreat hotel in Kerala. “The confusions that can arise in the transition from East to West, sacred to secular, are clearly discernible in the three main branches of Indian wisdom that have been exported from the Land of the Veda in the last century or so: postural yoga, meditation and Ayurveda, or ‘the knowledge of life,’” he writes. His goal in the book is to bring clarity.