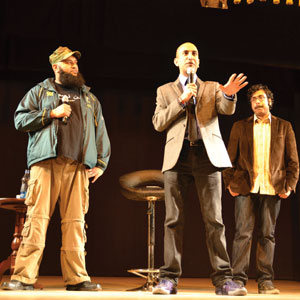 Call it ComDiplomacy. When the State Department forks out $88,000 to send three stand-up comics abroad, we know they mean business—especially if the goal is to ‘Make Chai Not War.’ That’s the title Azhar Usman, Rajiv Satyal and Hari Kondabolu use for their comedy routine, which they performed last month on their seven-city tour in India.

Keen to shed his ‘geeky’ image in the Midwest, Satyal tried to become the class clown; instead he was made the class president. And his college application, he jokes, came with the pre-med box already checked. After leaving Proctor & Gamble, this former engineer became a full-time comedian. Usman, too, grew up in the Midwest, although he studied law before 9/11 pushed him in the direction of community activism. He’s a well-known comedian who, given his skullcap and long beard, embraces the moniker ‘Bin Laughing.’

And Kondabolu, who grew up in New York, has a master’s degree in human rights from the London School of  Economics. That could well be changed to master’s in “humor rights,” now that this funnyman is gaining wider acclaim in his new role. He’s not to be confused with Ashok Kondabolu, his younger brother, who is with the rap group Das Racist. They do a show in New York called the United Kondabolus Brothers.

The trio was well received in India, especially in the big cities, but there were also challenges. As Kondabolu
tweeted, “Performed for 1000 people in Indian state of Bihar. I can now say for sure that English ﬂuency is an
audience requirement for my comedy.”