Girls who Root for STEM 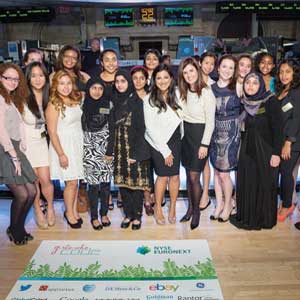 Reshma Saujani, founder of Girls Who Code (GWC), is big on female education, especially when there’s a lack of opportunities. She’s also big on public office, though her 2010 bid for Congress as a New York Democrat was unsuccessful. Saujani, a former deputy public advocate who established GWC last year, won a Next MAKER award for her work. Six women picked from 1200 nominations received a grant of $10,000 each to advance their mission. And last month, GWC was honored on the stage at the 2013 Women in the World Summit. Saujani, who has a master’s in public policy from Harvard, is a Yale Law School graduate.

GWC uses simple pie charts to show why their work is necessary. The first chart shows how many high school seniors pick computer science as their undergraduate major. Just 0.3 percent, though 74 percent of girls took a shine to STEM (Science, Technology, Engineering, Medicine) in middle school. But a stint at GWC can make a difference, going by the next chart, because every participant of the 2012 program opted for computer science in college.

Yet another chart shows that the share of female computer science graduates today is 12 percent—which is actually a drop from 37 percent about 30 years ago. Although women account for half the workforce today, they hold just a quarter of the jobs in computing or technical fields.

Why does it matter so much? By 2020, according to the U.S. Department of Labor, 1.4 million jobs will be in computer science. However, as another chart shows, American universities will produce enough graduates for only 29 percent of these jobs.

So how does the program work? High school students can apply to GWC for summer immersion classes, which will be held in New York, Detroit, and three other locations in California. They’ll learn mobile development, web design, and robotics, with high-ranking women in these fields acting as mentors. Best of all, the trainees don’t pay a fee (the program is supported by funding). The first batch had 20 students, but that number this year will go up to 160.