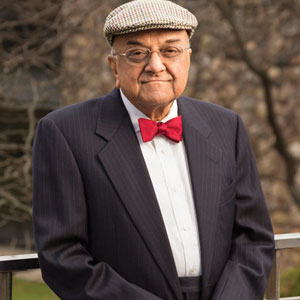 Rangaswamy Srinivasan, recipient of National Medal of Technology and Innovation.

There were earlier researchers who were involved in Lasik (Laser-Assisted in Situ Kerato-mileusis), including Mani Lal Bhaumik, who played a lead role in the development of the excimer laser, which made laser surgery possible. But it was Peyman who won the U.S. patent for the surgical procedure he implemented in 1989.

And that became possible because of a Thanksgiving meal. In the ’80s, Srinivasan and his two colleagues were trying to figure out how excimer lasers could be used in surgery. They wanted to try it on tissue and see if they could make clean etches without causing thermal damage to the surrounding tissue. Srinivasan brought the leftovers of a turkey meal—and it worked. He called this successful ultraviolet excimer laser, which made Lasik possible, APD (Ablative Photodecomposition). Srinivasan, who also won the Biological Physics Prize, teamed up with a surgeon for a cornea operation using APD.