Preet Bharara: Man of the Moment 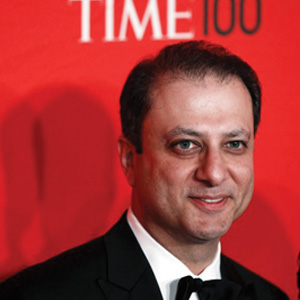 One of the most prominent Indian-Americans in recent times, Gupta had a spectacular fall from grace after he was accused—and subsequently found guilty—of insider trading. Bharara’s profile, in the meantime, rose sharply and he’s become widely respected. He made it to the cover of Time magazine, which also recently picked him as one of its 100 most influential people this year. Gupta’s highly publicized trial took place in none other than U.S. Attorney Bharara’s district, which includes Manhattan. Appointed in 2009, Bharara became known for his aggressive prosecution of financial crimes associated with Wall Street, although his focus now seems to be shifting to cybercrimes. He set up the Complex Frauds Unit and the Civil Frauds Unit. Notable convictions under his watch include those of Raj Rajaratnam, who got a 11-year sentence for insider trading, and the Times Square bomber, Faisal Shahzad, who received a life sentence.

Not everybody is gung-ho and, as the same newspaper noted, some colleagues “felt Mr. Bharara was taking too much credit.” Still, if Obama gets reelected, will Bharara become the next Attorney General? Keep watching.