Sugata Mitra's School in the Cloud 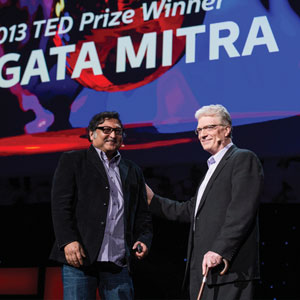 The annual TED (Technology, Entertainment, Design) prize, inaugurated in 2005, is now worth $1 million. In 2013 it went to educator and physicist Sugata Mitra, who is Professor of Educational Technology at Newcastle University in the U.K. The award will allow him to build a learning lab in India called the School in the Cloud, where cloud-based approaches will explore and facilitate online learning. Also integral to the new project is a SOLE (self-organizing learning environment) toolkit that will benefit educators, children, and parents.

Mitra’s interest in self-directed learning, or what he calls MIE (minimally invasive education), began when he noticed, through his famous “Hole in the Wall” experiment, that children were good at learning on their own, even when they came from impoverished families and had little exposure to education. What they needed was support. Reportedly, diplomat and author Vikas Swarup found inspiration in this experiment when he wrote Q & A, a novel that became better known as the film Slumdog Millionaire.