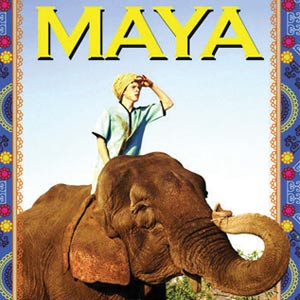 While Indian characters on American TV shows are no longer uncommon, or even stereotypical, and some actors (Mindy Kaling, Kunal Nayyar, et al.) are doing well, now we can also check out a new DVD of the first American TV series set in India. Titled Maya, the series—which aired on NBC from 1967 to 1968—was released last month by Warner Brothers as a MOD (manufacture-on-demand) DVD set. It stars Sajid Khan, who was adopted in real life by the filmmaker Mehboob Khan, and Jay North as two boys who are looking for North’s hunter father, presumed lost or killed by a tiger during an expedition in India. Khan is a local Indian boy, recruited to guide North, and joining them in the search is—surprise!—an Indian elephant named Maya.

Isn’t it dated? Sure. But though the series may be cliché-ridden and cringe-worthy by today’s standards, it’s bound to have historical value. Inspired by a 1966 movie, it was shot on location in the jungle and featured some notable Indian actors of that era, including Prem Nath, Iftekhar, and I.S. Johar.

Praised for its scenic locales, the series appeared on TV for an hour every Saturday, but due to modest ratings and high production costs, it was cancelled after 18 episodes.