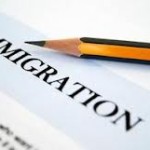 Despite the fact that the number of undocumented Indian immigrants in the U.S. is estimated to be over a quarter million, most Indian Americans don’t seem to identify with the raging national issue surrounding “illegal” immigrants. Historically, since the Immigration and Nationality Act of 1965, Indian immigration in the U.S. has been largely legal. The presence of undocumented Indians in vast numbers is a relatively recent phenomenon. Perhaps because of this, many of us fall into a false sense of comfort. We often tend to ignore various facets of the issue, including how undocumented immigrants are referred to, and consequently, treated in the U.S.

Take, for example, the insistence of the far right to use the term “illegal immigrants” over “undocumented immigrants”. At face value it seems entirely appropriate to do so: after all these folks are here illegally, aren’t they? The degree of their illegality may differ: some flagrantly violated the nation’s borders, some manipulated documents, and some others simply overstayed their legal allowance in the country. In all cases, however, describing their current status as “illegal” seems accurate and appropriate.

“But,” writes Nowmee Shehab in a letter to us (see “Saying ‘illegal’ is inaccurate and dehumanizing” in Readers Write), “no human being is ‘illegal.’”

True, no “human being” is “illegal.” And yet, “immigrants” can be and often are “illegal”—just as a “doctor” practicing medicine without proper credentials is an “illegal” doctor. Or a massage parlor doing business without proper licenses is an “illegal” parlor—not simply an undocumented one. It would be disingenuous to argue against the fact that, technically speaking, the term “illegal immigrant” is accurate in many if not most contexts.

But just because it is accurate, does it mean it is appropriate?

The reason an increasing number of media houses are moving away from using “illegal” in this context is not because of pandering to political correctness as the critics would maintain. For one, the slope between an illegal “immigrant” and an illegal “person” is slippery. Author and civil liberties expert Tom Head argues, “It’s contrary to the Fourteenth Amendment, which affirms that neither the federal government nor state governments may ‘deny to any person within its jurisdiction the equal protection of the laws.’ An undocumented immigrant has violated immigration requirements, but is still a legal person under the law, as is anyone under the jurisdiction of the law. The equal protection clause was written to prevent state governments from defining any human being as anything less than a legal person.” This means that law enforcement officials are required to afford the same rights to those who have presumably violated immigration laws as are given to those who have presumably violated laws regarding contraband drug possession, for example.

*It is from this standpoint that a broader practice of using “illegal” over “undocumented” is more susceptible to abuse. After all, an “illegal alien” is far easier to throw behind bars without due process of law, than is an “undocumented immigrant.”

There is, however, a far more profound philosophical reason against using “illegal.” The judgmental nature of the descriptive in this context gives an impression that it is only the immigrants who are responsible for their illegal status, while absolving the rest of us. The fact is, over 12 million “illegal” immigrants could not exist in this country if not for the fact that establishment America was a covert accomplice to this massive illegal migration. Seduced by their cheap labor, we practically laid out a welcome mat for them for over a couple of decades. Through a widespread lack of enforcement, we thrived by using their cheap labor in housing, farming, and a whole host of other industries—thus signaling them, even if unintentionally, to come in massive numbers. In boom times, businesses sanctioned them; consumers sanctioned them; lawmakers sanctioned them. To now insist on describing them as “illegal” in a judgmental way—after millions of them have been living here for a decade or two, and have been working hard at jobs that by and large Americans do not want—is profoundly ungrateful and wrong. Worse, it amounts to enticement and entrapment.

*Now, after all these years, there is the further complication of the children of these workers, who were either brought here as youngsters or were born here and who have been brought up as Americans, studying, planning on college and a good career for themselves and to allow them to take care of their parents in their old age—when suddenly they find out in their high school years that doors are closed to them. They can not even apply to Georgia colleges, let alone attend, even if their grades are excellent. They have not been able to get a driver’s license and drive to work, but must take the bus to work at McDonald’s or some similar low-paying job—without prospects of progressing to anything better. In their case, too, it is inappropriate to refer to them as “illegal” since they have broken no more laws than any of the other American children that they grew up with. Here, too, “undocumented” is the more reasonable and appropriate term.

*These children fear coming forward to get help, as that might mean that their families would be identified as “illegal” and therefore might be swept up into detention or expelled from the county, breaking up families or sending children to countries where they would be uncomfortable with the culture or language, or simply in much worse and possibly unsafe living conditions.

*For all these reasons, calling people undocumented rather than illegal will help us to shed emotional connotations, consider the situation honestly and fairly, and reform the system so that good, noncriminal, hardworking people can remain here to both better their lives and help our country grow.

[The article above contains additional material not in the print and digital issues. The additional paragraphs are marked by an asterisk (*).]

Link:
School, work, driving, ... A related debate is ongoing in the Georgia legislature:
President Obama's recent executive action includes allowing some people to receive work permits and deportation deferrals. However, some Georgia legislators want to prevent them from obtaining a driver's license.
http://www.ajc.com/news/news/state-regional-govt-politics/georgia-senator-ban-drivers-licenses-for-immigrant/nh8zT/