The People and the Presidency 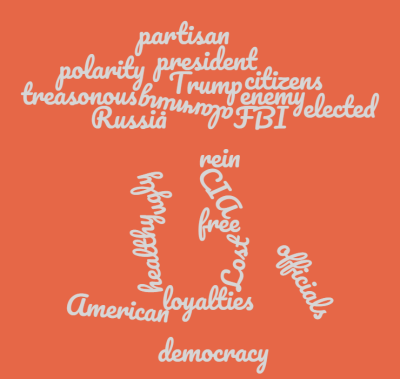 It could be a simple, rational choice based on one’s needs and preferences. There is no right or wrong in that choice: both have the potential to enhance our lives, which are now endlessly dependent on these mobile devices. And yet we know that the above question is far from a casual one for the millions of extremist fans of one or the other. To them, such a question may well be an insult, coming as they are from a standpoint of “Is there even a choice?”

The point is, humans are capable of turning a simple consumer choice to a massively loaded, emotionally charged issue of pride and prejudice. We all know “missionaries” of one brand or another, ever willing to convert anyone they can to their brand. Once there is such a personal identification with a brand, the choice is no longer rational. It’s easily possible for brand X to offer a superior new product than brand Y, but the zealots of brand Y are simply not able to see that. In their mind, no matter how advanced the other brands become, they are stuck on the idea of the superiority of their brand. And since there is heavy ego identification with it, they now feel compelled to keep justifying their choice, regardless of the developing realities of the marketplace.

If we humans are capable of losing objectivity and becoming sentimentally attached to something as simple as an electronic device, one can hardly imagine how hopelessly prejudiced we could get about our choice of a president for the nation—where the feelings and consequences are so much more in intensity and magnitude.

Even before the election that placed Donald Trump in the White House, I could see no redeeming qualities in him, much less presidential qualities. And yet, as much as I may not like it, I have to acknowledge that there were at least a percentage of Trump voters who voted for him for the right reasons: to improve the economy, protect the country, and well, “make America great again.” They perhaps thought that the antics of Trump on the campaign trail were only to appease his base, and that once in the White House, he would morph into a grown-up, even if a disruptive president.

Fair enough. But the concern is how many of these Trump voters, in the process, became his missionaries? Has it become for them an issue of pride and prejudice even though, ultimately, picking a president is a consumer choice? Granted, the consequences of this decision are far more profound than those of choosing a smart phone, but the point is, at its core, do we see that voting, in a democracy, must be a consumer choice and not an ideological or partisan investment? Only then does democracy remain functional and alive.

A partisan mind-set is perfectly fine during the election process. But once an election is over, it is far more important to become a neutral citizen and consumer of the government so that we can hold our elected officials accountable, rather than become ideological apologists for them. Lost in the ugly partisan polarity of our times is the fact that a democracy is more healthy when all citizens hold their elected officials, especially the president, accountable as opposed to close to half of them giving him a free rein in the name of partisan loyalties. From that standpoint, whether diehard supporters realize it or not, they get better government (which has the potential to make America great) when they partner with their political opponents as co-consumers of governance, as opposed to when they become mindless, irrational, ideological, and prejudiced minions of their party. Because, let’s face it, when the chickens come to roost on the most important decisions of the president, they will impact the lives of all Americans, not just those of the opposite side.

To their credit, Democrats were largely on board with this need for a consumer stance towards the presidency, as opposed to blind partisan support. From regime change efforts in Libya, to increasing bombings in the Middle East in the name of surgical strikes, to gun control, and many other issues, Democrats consistently challenged “their” own president and held him accountable. Sure, there are always exceptions: leftist ideologues and extremists who never saw any wrong in Obama. But by and large, Democrats demanded sound governance from Obama, rather than blindly fall in step with all he did. The mainstream media that the right likes to demonize endlessly as biased had its share of critical op-eds and articles on Obama during his eight years.

In contrast, broadly speaking, right wingers have ended up worshiping at the altar of Almighty Trump. What these rabid Trump supporters don’t realize is that when they blindly stand behind “their” man, even through his daily assaults on the Judiciary and the Free Press, the damage they are doing is not just to their political opponents but to the entire nation. They may shout down all who caution against Trump’s dangerous games of power struggle; but when, as a result of these shenanigans, our 200+-years-old system of checks-and-balances will crumble, it will be the end of America as we know it—what was once a beacon for the world. Far from making it great again, there is a clear and present danger that Donald Trump will be the cause of the downfall of America. He is a bull in a China shop—and this is not partisan rhetoric. This is the consensus of an increasing number of reputable individuals and institutions across party lines:
• Seventeen of America’s fabled intelligence agencies, including the FBI and CIA, have all unanimously confirmed alarming and suspicious interactions of the Trump camp with Russia. A genuine American patriot would be extremely concerned about getting to the bottom of this—as there has never been anything as treasonous as an American president in cahoots with its most diabolic enemy, should it turn out to be the case.
• Over 900 American diplomats, obviously of all political bents, have unanimously signed a memo declaring Trump’s incompetent, clueless, and fearmongering travel ban as something that, far from making us safer, will strengthen the terrorist outfits that thrive on such a holy war with the West.
• An unprecedented number of groups from various sectors—from farmers to presidents of Ivy League universities—are daily voicing concerns about how Trump’s policy proposals will hurt their industries. And that’s even before the completion of the second month of this presidency!

The very soul and future of America rests on those Trump voters who will be able to muster the maturity, character, and courage to now realize that Trump has become public enemy # 1—despite his blessed-heart intention of making America great again. Remember Baghdad Bob? He was the infamous Information Minister of Iraq during the American invasion of the country in 2003. Muhammad Saeed al-Sahhaf—Baghdad Bob—became the laughing stock of the world due to his straight-faced propaganda on TV of how invincible the Iraqi army was—even as right behind him American troops were easily taking command of the city. With Trump’s increasingly bizarre lies, he is fast headed in the direction of Baghdad Bob. But Baghdad Bob was a just two-bit minister of a despotic regime; Trump, on the other hand holds the most powerful political office in the world. With so much at stake, we can only hope that well-meaning Trump supporters will embrace real patriotism and hold the President accountable rather than fall for the empty sound bite of patriotism with its hollow sloganeering of “making America great again.” No one can make America great by daily attacks on American values, principles, and systems that were so painstakingly charted by the sage founding fathers of the nation.