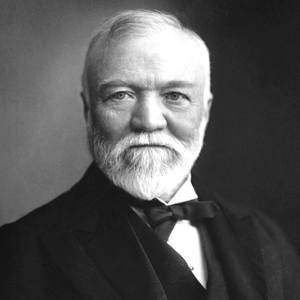 Andrew Carnegie (see photo at left), John D. Rockefeller, J. Pierpont Morgan, Cornelius Vanderbilt, and many other blazing entrepreneurs were storied names in our history. But were they “Robber Barons” as often described, or were they captains of industries who did good?

In the golden age of American families, parents did not consult with their children before booking vacations, a charming custom I passed along to my daughter, Molly. Life is full of pain and heartache, I told her when she was ten years old, as she wondered why she and I were hauling our suitcases on the icy sidewalks of Butte, Montana toward the former home of William Andrews Clark, and not down Main Street in Disneyworld, like her friend Anna Waller.

“Molly, someday you will tell your friends about the time that you spent a night in the Copper King Mansion, home to one of America’s most notorious Robber Barons.”

“I’m sure I’ll forget about this trip to Butte, Montana! I’m starving and it’s cold. The bank thermometer says it’s minus seven.—What’s a Robber Baron?”

“Oh no, I didn’t mean to ask. Take back. I really don’t care about Robber Barons.”

“Too late. It will be our lead topic at dinner.”

Andrew Carnegie, John D. Rockefeller, J. Pierpont Morgan, Cornelius Vanderbilt, James B. Duke, and Williams Andrews Clark—these men, and a handful of others from the latter half of the nineteenth century and the first few years of the twentieth, are the legends of American business. Today, their names are revered on Wall Street, carry weight in Washington, and are affixed to a couple of our finest colleges. In the case of Carnegie, Rockefeller, and Duke, their century old foundations continue to support noble and just causes.

But who were these men? How did they make their money? Were they ruthless Robber Barons as many claim, or were they the captains of industry, the men whose drive and ambition quite literally built the country? Should we shove aside the uncomfortable, as we do with our slave-owning presidents, George Washington and Thomas Jefferson, or take more public note of the fuller life? Such questions are academic to us, but very real to those who once worked in Andrew Carnegie’s steel mills.

In 1890, you and your husband leave Poland for a better life in America. You pass through the immigration on Ellis Island in New York. You learn that the great steel mills of Pittsburgh, Pennsylvania are looking for workers, so you go there. Your husband lands a job with United States Steel. It all sounds good, but it isn’t.

Your husband works twelve-hour shifts, seven days a week, in very dangerous conditions. Vacation days? Your husband gets one a year—July 4. Pay? Your husband earns ten dollars a week, just above the poverty line of 500 dollars a year. Line up 4,000 men. Add up their salaries and stare at the sum. Now you know what the owner makes.

“Hard! I guess it’s hard,” said a laborer at the Homestead mill. “I lost forty pounds the first three months I came into this business. It sweats the life out of a man. I often drink two buckets of water during twelve hours; the sweat drips through my sleeves, and runs down my legs and fills my shoes.”

Andrew Carnegie (1835-1919) became one of the richest people in American history. In the last two decades of his life, he became one of the most generous. Today, he is best remembered for his role in the construction of over three thousand public libraries. His 1889 article proclaiming “The Gospel of Wealth,” called on the rich to use their wealth to improve society.

Carnegie and his ilk made their fortunes during the Gilded Age, one of my favorite eras in American history. Our post-Civil War government was in its infancy, its immaturity no match for the voracious appetites of America’s first tycoons. In 1873, Mark Twain and his co-author, Charles Dudley Warner, published The Gilded Age: A Tale of Today, a clever title that exposed the illusion of the seemingly glittery period, to the graft, materialism, and corruption below the surface. 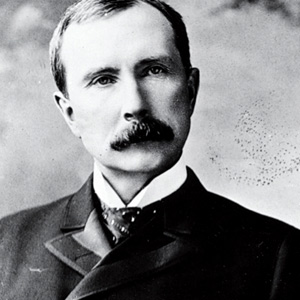 Your name is Ida Tarbell and you are fourteen years old. Your dad and dozens of other small oil producers in Ohio and Western Pennsylvania receive unexpected buy-out offers from John D. Rockefeller’s Standard Oil Company. The offer was really a threat: Accept this or we will wipe you out. The “oil war” of 1872 ended with Rockefeller owning 85% of the city’s oil refineries. Ida never forgot her dad’s suffering.

Thirty years later, in a devastating, nineteen part investigative series published in McClure’s magazine, she exposed the corruption at Standard Oil. According to Smithsonian, it was “a masterpiece of journalism and an unrelenting indictment that brought down one of history’s greatest tycoons and effectively broke up Standard Oil’s monopoly.” New York University placed her 1904 book, The History of the Standard Oil Company, at No. 5 on a list of the top 100 works of 20th-century American journalism.

Rockefeller (see photo above), by then a noted philanthropist, referred to her as “that poisonous woman,” but told advisers not to comment on the allegations. Today, the Rockefeller Foundation’s mission is to “promote the well-being of humanity throughout the world.” 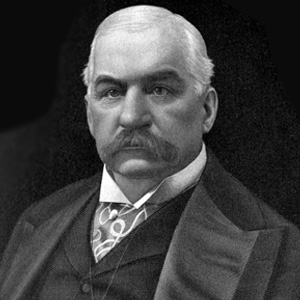 Our nations booming industries needed financial acumen; such was provided by John Pierpont “J.P.” Morgan (1837-1913) (see photo at left), a man described as America’s greatest banker. When he died, his fortune was estimated at "only" $80 million, prompting John D. Rockefeller to say, “And to think, he wasn't even a rich man.”

Another ruthless businessman—James B. Duke (1856-1925)—is of similar caliber. He made his money by monopolizing the tobacco markets, then later, by acquiring textile mills and power companies. Eventually, the government broke up his monopolies, but not before his fortune had been made. Near the end of his life, he established The Duke Endowment. Today, it provides financial support to Duke University and others, including Davidson College and Furman University. 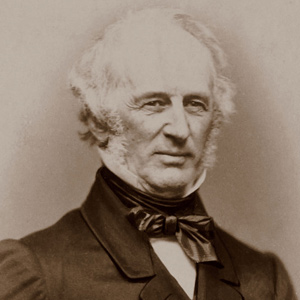 The same generosities that place a few of our Robber Barons in kinder light cannot be found in the life of the Railroad King, Cornelius “Commodore” Vanderbilt (1794-1877) (see photo at left). Our nation needed a rail system, he was determined to control that market, and he did, eventually amassing a fortune that his son, William Henry Vanderbilt doubled. Only late in his life did the Commodore provide the necessary endowment to fund his namesake university, his only major philanthropic effort.

It is possible to sample what life was like during the Gilded Age. The youngest son of William Henry Vanderbilt built the famous and now-public Biltmore Estate near Asheville, North Carolina. But to best experience the era, travel to Newport, Rhode Island. It is in that resort city that the Vanderbilt grandsons, pushed by wives who wished to out-do each other, constructed competing “cottages” that cost upwards of $15M. It is possible to tour the mansions, as it is dozen of others in Newport, including one owned by Doris Duke, daughter of James B. Duke.

And then there is the story of William Andrews Clark, the Copper King. Similar to the other Robber Barons, he acquired much, gave back some. In 1999, when Molly and I toured his former home, we were shocked when we learned that one of his daughters, Huguette Clark, was still alive. Her 2011 death at the age of 104 would make national news. Here was the last living link to the Gilded Age, the papers wrote.

I called Molly when I learned of her death.

“I knew you’d call! I can’t believe she lived that long. And never mind what I said when I was ten years old, I will always remember that trip to the Copper King Mansion in Butte, Montana.”