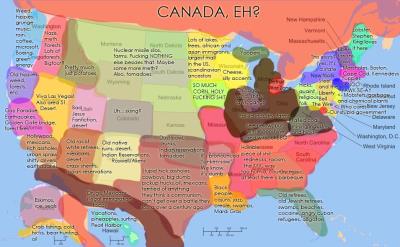 “When you’re a social animal, you need to be able to distinguish who’s a friend and who’s a foe. You need to understand who’s a

member of your pack, who’s a member of a different pack.”

“Of course,” I had told my wife when she asked if her mom, a very Southern, soft-spoken woman, could join my side of the family for our traditional New England vacation, not knowing that my Northern-born mother and Southern-born mother-in-law would unleash their regional stereotypes and prejudices on the other, each firing their verbal missives with the certainty of Winston Churchill and the precision of a Rajput. If given the choice between reliving that week or being poked in the eye with a sharp stick, I’d say, “Bring on the wood.”

I don’t know what got into Mom that week.  She, like the rest of our family, loves the South. My parents never returned to the North after moving to Raleigh, North Carolina, from Poughkeepsie, New York, in 1966. Yet, during those few days, Mom, acting like a “damn Yankee,” made it cleart to our guest: The North is superior and you are from the South.

Before we launch into this ill-advised topic, I have a disclaimer and an assumption: I stereotype, and so do you. Social scientists consider age, sex, and race to be the “big three” of stereotypes and that is true enough, but tsk, such a modest list! I don’t wish to brag, but I can stereotype on the basis of a person’s looks, clothes, occupation, religion, language, income, blonde hairs, tattoos, and body piercings. Missing teeth, too, yes, add those to the list. Yet, there is redemption. Paul Bloom of Yale University offers that our brains are wired to stereotype, plausibly notes that our survival can depend on quick assessments based on past experiences. I am not an authority on those matters, but I can share my list of America’s greatest stereotypes.

If you are near your computer, access the Internet and navigate to the Google command line.  Now type: “Why is Georgia so…”  Look at Google’s auto-fills! Those drop-down suggestions represent the most popular questions that are being asked about Georgia.

People want to know why Georgia is so humid, hot, cheap, and racist.

My home state of South Carolina is all those things, plus poor and backward.

Never mind that my home state has a female governor and her parents are Sikhs!  Never mind that the only black United States senator in the entire country is from South Carolina! Never mind that as many as 20,000 whites and blacks walked together in unity, a few nights after the horrible Charleston church massacre, holding hands as they sang religious and patriotic songs! For the love of God, what might Gandhi have said about our people’s reaction to the horrific event?

For the record, etymologists are not sure about the origins or the history of the phrases Damn Yankee or Redneck. No matter. Feel free to consider a Damn Yankee as a Northern know-it-all who is hip, urban, and city-smart, and Rednecks as the less-educated and less-cultured people of the South. If we take a broader view, people of the South are considered more polite and hospitable.

My descriptions are exaggerated; stereotyping in practice is much more subtle. Through exclusions and slights if not outright hostility, Southern born presidents Jimmy Carter and Lyndon Johnson, both self-made men, felt the “we are smarter than you” condescension from members of the Northern-born, Harvard-educated Kennedy clan. Nor do catch all categories such as “damn Yankee” or “Southern redneck” capture all of the nuances.  My parents, while from the North, considered themselves New Englanders, a lot proud of their toughness, independence, and “back to the Mayflower” heritage.

As part of an academic study, 16 psychology students at Wake Forest University were asked to categorize our 50 states by “personality.” It took 20 groupings to complete that part of the assignment.  Florida, despite being in the geographic South, was classified as unique. They got it exactly right.

Florida, we know, is where gray-haired people from the North and Midwest go to play shuffleboard, complain about their children, apply ointments, and then die.  My mom and dad, stereotypical New Englanders, considered the state to be “a sprawling cemetery surrounded by water.”  Florida, originally settled by the Spanish, has little shared history or culture with the states of the “Old South” that run from Virginia to Mississippi.

I am in West Texas, talking to Ken Potts. It’s oven hot and my Irish skin is baking. He talks slowly like he’s trying to conserve energy, but that isn’t true. He just talks slowly.  I just learned that his wife is from South Carolina and that they often visit her parents.  That’s one boring drive I offer, thinking of the bleak landscape that covers most of Texas.

“Yup. Sure is. When we get to Louisiana, all we have to look at are them ugly pine trees.”

In the Bible we learn that God created the world and it was good. Close enough, my Texas friends might say, but not quite accurate. In their minds, God created Texas, and it was good. In 2013, more than 100,000 Texans signed a petition calling on the Obama administration to allow their state to secede from the United States. They think mighty big in Texas, they do.

“The development team is working long hours to make up for lost time,” the president of our California based company had told me, but when I arrived to see for myself, it was clear they weren’t. Told everyone what I thought. It’s possible my face got red. The Californians thought the sales guy from the South had gone quite mad and was about to blow a gasket. They were wrong. I blew two gaskets as I vented my spleen. Your California “laid back” attitudes are costing me sales, I wanted to say, but didn’t.

“Laid back” is often used in reference to a Californian with a calm, perhaps indifferent, demeanor.  But the phrase can also mean an accepting attitude, or better, an indifference toward alternative lifestyles. Much of our country was settled by European Christians, but less so for California, a state that was settled by people of many different races and religions. Accommodation to these foreign beliefs and customs is part of California’s DNA.

It is no longer politically correct to call California the land of “fruits and nuts,” a once popular and derogatory stereotype of the state’s gay population. But it is acceptable to talk about California’s Valley Girls, those young, self-centered, materialistic females who live in California’s San Fernando Valley. "Totally," "as if," "tubular," "gag me with a spoon"—such are the language contributions these, um, young women, have made to American culture.

So far, we have considered America’s more popular regional stereotypes based on a mix of history, culture, and demographics. How does language fit into the discussion?

Professors Kinzler and DeJesus studied kids aged 5-6 from Chicago, and an equal number from a small town in Tennessee. They showed each group a few pictures, then a 3-second audio clip.  One clip featured a Northern accent, the other a Southern.

The kids from Chicago overwhelmingly selected the Northern-accented speakers as “friends.” The Tennessee kids had no preference based on accent. Five years later, they tested the same groups. The ten-year-old children from both areas thought the Northern-accented individuals were “smarter” and “in charge,” and that the Southern-accented individuals were “nicer.” The professors believe that the children had changed their views based on cultural influences, such as television and movies.

Stereotypes do fade over time, some faster than others.  Consider my own ancestry.

In the 1800s, the Chicago Post noted, “The Irish fill our prisons, our poor houses...Scratch a convict or a pauper, and the chances are that you tickle the skin of an Irish Catholic. Putting them on a boat and sending them home would end crime in this country.” Today, Google “Why are the Irish so…” and learn that people wish to know why my ancestors are so strong, nice, and beautiful.

My miles across the country have been many and rich, made more so by my occasional efforts to see the individual and not just the stereotype, just like the academics recommend.  I have laughed with those Damn Yankees, drank longneck beers with big-talking Texans, count​ed among my friends those so-called “fruits and nuts” from California, and in such diversity, I feel blessed.