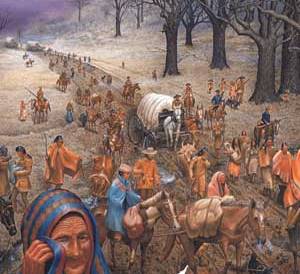 The sad saga of how the voice of our nation’s first people is nearly extinct.

(Left) The ‘Trail of Tears’ may well be one of the most, if not the most, tragic chapter in American history. (Image: Max Standley, Trail of Tears. Courtesy of R. Michelson Galleries)

I climbed over the split rail fence and walked into the woods until I reached a small clearing. It is here, in the sanctity of the forest, that my friends and I often held our secret club meetings, but not today. I reached into my pocket and pulled out a small Indian arrowhead I had found buried in the dirt.

Who shot this, I wondered, as I turned the stony weapon in my unwrinkled hands. Was it a young Indian boy whose dad was teaching him how to hunt, or did a real warrior use this very flint to bag a pheasant or wild turkey? What ever happened to the Mohawks, Iroquois, and other tribes that once traveled up and down the Hudson River Valley?

I stuffed the arrowhead back in my pocket and headed home, this time returning by a route that took me through an untamed field of Indian corn. No good for eating, dad had told me, it doesn’t grow tall and green like real American corn.

When I returned home, I went to my room that I shared with my sister, Donna, and placed the arrowhead in one of Dad’s old cigar boxes. Someday, I will figure out where the Indians went, I promised myself, and that oath was made a long time ago.

What has happened to those tens of millions of brown-skinned people who once roamed all of North America? Why does our knowledge of Indian history seemingly begin and end with that first Thanksgiving meal, celebrated in 1621 between the Pilgrims and the native people?

As I considered this topic, I asked a whole lot of people what they knew about our Native American including my physical therapist. She looked at me, and in less than two seconds, let it rip.

In a public room filled with a dozen or so other people, she let loose a string of woo-woo-woo-woo war whoops! Everyone laughed at the politically incorrect humor, including two blue-haired grannies, a young black kid who was rehabbing a sports injury, and a handful of middle-aged white people, like me.

“Well, that’s all I know!” she gasped, tears streaming down her face.

I then asked the others what they knew.

One of the grannies told me she knew they all slept in teepees. I let her think that was true.

An older white woman remembered the Indian, Tonto, from the 1950s television show, The Lone Ranger. He would say things such as, “That’s right, kemosabe,” to his white companion, or maybe, “Him say man ride over ridge on horse.”

Not one person mentioned the many peace treaties that we broke with the native people in order to confiscate their lands.

No one remembered that in 1886, future President Theodore Roosevelt said, “I don't go so far as to think that the only good Indians are dead Indians, but I believe nine out of every ten are, and I shouldn't like to inquire too closely into the case of the tenth.”

No one knew that in 1863, President Abraham Lincoln’s administration oversaw the forced removal of the Navajos and the Mescalero Apaches from the New Mexico Territory.

The injustices lasted well into the 20th century. The federal government’s Bureau of Indian Affairs, wishing to quickly assimilate Indian kids into American culture, established and operated ‘off-the-reservation’ boarding schools. To be an American kid you have to look like an American kid, so one of the first things the schools did when the children arrived was to cut their long, luxurious hair.

Think this is ancient history?

Bill Wright, a six-year-old Pattwin Indian, was sent to one such school in 1945.

“I remember coming home and my grandma asked me to talk Indian to her and I said, ‘Grandma, I don’t understand you,’” Wright says. His Grandma’s response was, “Then who are you?”

Wright says he told her his name was Billy. “Your name’s not Billy. Your name’s TAH-rruhm,” she told him. “And I went, ‘That’s not what they told me.’”

It was in the kid’s best interest not to speak a native language, that’s what the Bureau of Indian Affairs decided.

But hey, let me tell you what we do know.

The tens of millions of people who have attended an Atlanta Braves baseball game know the tomahawk chop.

When they wish their team to rally, they chant their woo-woo-woo-woos as they move their arms. Maybe someday we will interrupt the game to let the locals know that in the late 1830s, President Andrew Jackson, disregarding the United States Supreme Court, forcibly removed 15,000 Cherokees from their lands in Georgia and the Carolinas and moved them to distant Oklahoma.

Thousands died on the ‘Trail of Tears’ march.

We do know the story of Pocahontas, not the historically correct one, but the Disney version. In the animated movie, a lip-glossed, full figured babe with an hourglass figure plays the heroine.

Historians are not sure if the story is legend or lore, but most Americans believe that Pocahontas, in 1607, saved the life of Captain John Smith by placing her head upon his when her father raised a club to kill him. Her connection with the Jamestown colony is not disputed, nor are the events of her later life.

In 1613, she was captured by the British and held for ransom. During her captivity, she became a Christian and changed her name to Rebecca. She soon married a John Rolfe. The newlyweds then traveled to London and mixed with English society. An exotic couple they were: he a prominent Virginia planter, she a ‘noble savage,’ that is, a simple and unencumbered person who was not corrupted by power, money, or material things.

Baron de Lahontan, a writer who lived among the Huron Indians for a period of time, wrote of the noble savage:

As against society he puts forward a sort of primitive Communism, of which the certain fruits are Justice and a happy life. ... He looks with compassion on poor civilized man—no courage, no strength, incapable of providing himself with food and shelter: a degenerate, a moral cretin, a figure of fun in his blue coat, his red hose, his black hat, his white plume and his green ribands…. It is civilized folk who are the real barbarians.

Pocahontas died on the couple’s return voyage to Jamestown. She was but 21 years old.

My dormant interest in Indian history reawakened in 1975 when I read Bury My Heart at Wounded Knee. Drawing on council records, autobiographies, and other firsthand descriptions, writer Dee Brown allows the Indian leaders of the day to tell us, in their own words, of the series of battles, massacres, and broken treaties that decimated their people.

It is one sobering book. So, too, are the accounts of the hopelessness that still exists on at least some of today’s Indian reservations.

In 1995, while bicycling across the United States, my former college roommate and I passed through a number of these reservations on our journey across Montana and North Dakota. Some of these were safe to visit. One, we were told by several people, the Blackfeet Indian Reservation in Browning, Montana, was not.

“If I were you fellows, I’d cycle through in the morning, before they are out of their beds,” one man offered.

“They get checks for just being Indians,” another man told us. “When they get their money they buy their liquor, and that’s when the trouble starts.”

My friend and I accepted the advice, woke up early and raced through the reservation without stopping. I wish, now, we had stopped for a meal or to purchase a few goods, but we didn’t, and that’s the sad truth of it.

In my photography and writing I am drawn to what has been lost, no more so than the story of our Native American. I have lived to see a black man become president, to hear the noise surrounding Black Lives Matter, to see a woman run for the office, to see the rise of the LGBTQ movements, but I have no reason to believe that the voice of our Native American will ever achieve such prominence.

The voice of our nation’s first people, even the woo-woo-woo-woos, is nearly extinct.