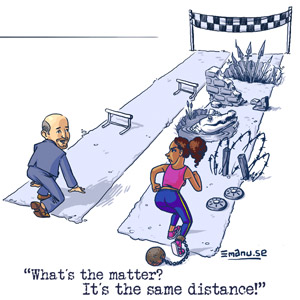 What, White Privilege?!!
Hold your horses, and read on…

The driver gives me a nod, tells me he will take care of me at the end of the week. I glance at the man and then unload his truck of filthy uniforms, a job that he is supposed to complete. Columbia, South Carolina is hot in the summertime, hotter yet again when you need money to pay for college tuition and the way to do that is to go inside a truck to unload sweat stained clothes and filthy towels. Seven others drivers make the same promise.

Earlier in that summer Dad had called me to ask if I wanted a car. Found one in a junkyard, he said, thought he could fix it up. Never had a car before, wow, thanks dad. It’s gorgeous, I told my parents when I picked it up in Raleigh. Who really needs air-conditioning or power steering? Drove it to that job unloading dirty uniforms. Drove it away from that job, too, when I got fired by the big boss for telling each of the seven drivers I needed more than one dollar a week for unloading their trucks.

In a land that was 85% white in the 1960s, are you telling me I didn’t have to fight for every last inch of personal success, often against those of greater privilege? That somehow my white skin guaranteed a satisfying American life, complete with two fancy cars, a fine home with adorable children, a cooing wife who brings me hot coffee in the morning, and a grove of money trees in the back yard?

No! Listen to me!

My white skin has brought me nothing but grief since our country’s demographics have changed, that’s what I say. Forget those salad days of my youth! Today, LGBTQIAs, BLM (Black Lives Matter), the Me Too Movement, Occupy Wall Street, each take dead aim at white people like me, sometimes acting as if I, personally, snuck into their backyards and whacked down their money trees.

Never mind how many tires I have changed for black women stranded helplessly on the side of the road. Never mind my charitable donations. Never mind the wildly diverse group of men and women I have hired as employees over the years. Never mind the huge tips I leave the housemaids who tidy my room at the Hampton Inn. Oh, never mind. Because I am white, all has been so easy and so assured.

And this is not just my view.

In an op-ed piece that went viral in Time magazine, Princeton student and white guy, Tal Fortgang, writes of being censored by his fellow students, of being told to “check his [white] privilege” by those of other colors. For writing what he feels, he receives praise from some, criticism from others. I read both sides. Guess what?

He deserved the criticism. And so do I.

When I first considered this topic, I did so with the predispositions that I have just shared, only to later learn the truth: I live in a world of White Privilege. Here’s a “for instance.”

It is almost impossible, today, to lock yourself out of your own car, but through a series of unfortunate events I pulled off the neat trick one late afternoon in the small town of Georgetown, South Carolina. Camera gear, wallet, and cell phone, all safe and secure on the inside of my Toyota Highlander. In the gathering gloom of a cool winter afternoon I honored my Irish ancestors with a string of expletives, but then after that mini-meltdown, hatched a recovery plan. I will flag down the first car that travels down this quiet street and ask for help.

In ten minutes or so, the first car appeared. I waved my arms as if I were flagging a New York City cab; the vehicle slowed and then stopped. How can I help, a woman asks. When I shared my sad narrative, she laughed, pulled to the curb, and after a few Google searches on her smart phone, located a locksmith who would arrive within just a few minutes. I need to go to town, she said, adding that she would shortly return to make sure I’d been helped.

In fifteen minutes a middle-aged black woman with astonishing dreadlocks appears in a truck. I am your locksmith, she says. In less than thirty minutes she gets me out of my mess. I pay the bill, plus another twenty. “May I hug you?” she asked, her eyes brimming with tears.

Never mind, at least for the time being, the “official definition” of White Privilege. All we need to consider is in the above vignette.

I am a white person. As a white person, I am more likely to receive help, to expect a satisfying outcome when, say, stranded on a street, than a black or brown person. Annoyed, sure, I was annoyed, but worried or scared, absolutely not. I am white.

Imagine if I were black and in those same circumstances. Does the woman stop to help? Will the next car stop, or the one after? Will I wait hours in the shivering cold for assistance? Will the white locksmith I call wish to help a black person after sunset on a quiet street? Being black in that situation would be a completely different experience.

Now consider the view of the black locksmith. That will be fifty-five dollars she said, below a fair price to my mind of what she should have charged, given her expertise, truck, tools, and quick professional response. I gave her what I thought was more appropriate, and then the tears and hugs, part gratitude I am sure, part relief I will suppose.

How many times has she helped someone, only to have that person size up a black woman working by herself, and leave without paying? A white locksmith would have no such fear.

Credit for creating this notion of White Privilege belongs to Peggy McIntosh. While a college student at Wellesley College, she was contemplating the subject of white male dominance when she came to see that view as part of a larger issue. Her “White Privilege: Unpacking the Invisible Knapsack” paper is as pertinent today as it was in 1989, the year it was written.

I have come to see white privilege as an invisible package of unearned assets that I can count on cashing each day, but about which I was “meant” to remain oblivious. White privilege is like an invisible weightless knapsack of special provisions, maps, passports, codebooks, visas, clothes, tools and blank checks…I began to understand why we are justly seen as oppressive, even when we don’t see ourselves that way.

To support her idea, she then listed twenty-six items that help explain the concept, including:

-I can be sure that my children will be given curricular materials that testify to the existence of their race.
-I can go shopping alone most of the time, pretty well assured that I will not be followed or harassed.
-I can take a job with an affirmative action employer without having co-workers on the job suspect that I got it because of race.
-I can be pretty sure that my neighbors [in a new neighborhood] will be neutral or pleasant to me.

I remember, now, that time a black friend of mine, Ben, simply said, “Let’s not eat there,” when I suggested a lunch at a diner in Blairsville, Georgia.

Then there was the time we had lunch at my nearly all-white country club. Halfway through our meal, the manager came by, introduced herself, and then invited Ben to join our club. Wow, I have been invited to join a country club, Ben kept saying, wow.

When people ask me what I pack when I travel to photograph the rural parts of America’s Southeast, I list the basics—a GPS device, a spiral notebook, camera gear, and a cooler filled with water. But that list, I now realize, is not quite accurate. I have traveled tens of thousands of miles with complete confidence, knowing that nothing much would likely go wrong, and if it did, I would not be fearful—a confidence attributable to White Privilege.

In another few hundred years or so, the faces of America will no longer be lily white. Gone will be the race of people, like me, who are tethered by history, culture, and skin to our country’s founding peoples and principles. The end of the era of White Privilege is drawing nigh, and it is time.