Americana: From Jerusalem to Jodhpur, from Christ to Claus 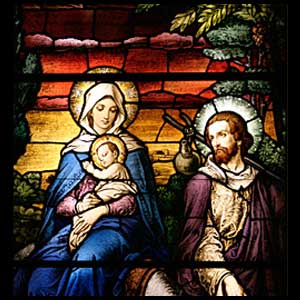 To the concern of the Jewish religious leaders and their Roman governing authorities, a man of humble origins was growing increasingly popular.

The Jews had long hungered for a great king who would help them achieve military victories over ancient foes, help rid their Holy City, Jerusalem, of the Romans, and restore the glory of their often trod-upon race. They dismissed the possibility that this person, Jesus, could possibly be that God-sent man. When Jesus snarled, “Woe to you, teachers of the law and Pharisees, you hypocrites!” at the Jewish leaders, the die was cast.

Faith is a requirement for all religions, and Christianity is no different. This month, we will offer a brief history of the religion, identify its requisite leaps of faith, and touch on its famous Christmas symbols.

We learn in the Bible that Mary, a virgin, is selected by God to give birth to His son, Jesus. Joseph, who is engaged to Mary, accepts Mary’s shocking explanation of her pregnancy and remains committed to the marriage. Borrowing from two popular Christmas songs, in that “Little Town of Bethlehem,” and “Away in a Manger,” Jesus is born.

The Bible consists of two sections, the Old Testament, which covers the pre-Christ days, and the New Testament. In the opening chapter of the Old Testament, Genesis, we learn that after God creates the earth, He makes a man, Adam. Seeing that Adam is lonely He provides a female companion, Eve. All is well in this Garden of Eden until Adam and Eve, tempted by the devil, disobey God’s orders and eat a forbidden apple. Since Adam is the “first man,” Christians believe that all of Adam’s descendants are born with the stain of “Original Sin” on their souls.

To break the cycle of sin, and provide people the opportunity to escape the evil force, Satan, God handpicks the “Virgin Mary” to give birth to His son. Jesus, by virtue of being “begotten not made,” is therefore free of Original Sin. Eventually, through his death and resurrection he defeats Satan, and by doing so, gives hope of eternal life.

Much of what we know about historical Jesus comes from the New Testament of the Bible. In the four “gospels” writers identified as Matthew, Mark, Luke, and John share the birth, life, death, and resurrection of Jesus Christ. These accounts are very accessible and on their own merits are considered among the world’s greatest literature.

Jesus is ultimately crucified. One of the gospels implies that the Romans ordered his death, another blames the Jews. But no matter, upon his death his “apostles” were terrified and rightly so. These were poor men who were tasked by Jesus to spread the “good news” of the gospel, but how, and at what cost? Before Jesus died, he empowered one of the twelve, Peter, to not only lead the movement, but to make doctrinal decisions on Christ’s behalf. Today, the Roman Catholic Church points to this transfer of power from Jesus to Peter, and from Peter to the next leader (eventually, “Popes”), as proof that through “apostolic succession” they are the only legitimate Christian church.

Several authors have claimed to have found manuscripts in India and Tibet that tell of Christ being there before he was thirty years old and before the record in the Bible of the end of his life. There is also some evidence to suggest that one of the twelve apostles, Thomas, might have traveled to south India as part of his mission work. In any event, the apostles and generations to follow were tortured and even suffered martyrdom at the hands of the Roman Empire. The 300-yearold battle ended in 317 AD when the Roman Emperor Constantine accepted Christianity.

Until 1520, the Roman Catholic Church extended its unchecked dominance over much of Europe. Winning the minds of the people was easy because most of the people during these “Dark Ages” had uneducated minds and no choice. To make conversions more palatable, the church authority might adopt the local pagan god as a Christian “saint.” Within this context emerges a certain “Saint Nicholas” from the 4th century. He had a habit, we are told, of secretly giving coins to the needy, and per the Catholic standards for sainthood, even performed a few miracles to boot. Maybe he did, maybe he didn’t, but here is the origin of our modern Santa Claus.

Pagan rituals and customs were similarly integrated into Christian ritual and worship. Jesus, for example, surely didn’t have a Christmas tree by his crib on December 25th! But that date, due to its proximity to the winter solstice, was celebrated by many cultures because it marked the return of more daylight. It is here, within the context of celebrating holiday greenery, that we likely find the origins of the Christmas tree.

Our tradition of gift giving to friends and family also has murky origins. Some believe that tradition took hold in the famous gospel story of how “Three Wise Men from the East” visited the newborn Jesus, bearing gifts of gold, frankincense, and myrrh. Others point to the pagan Roman holiday of Saturnalia, and note that gift giving was part of that festival. 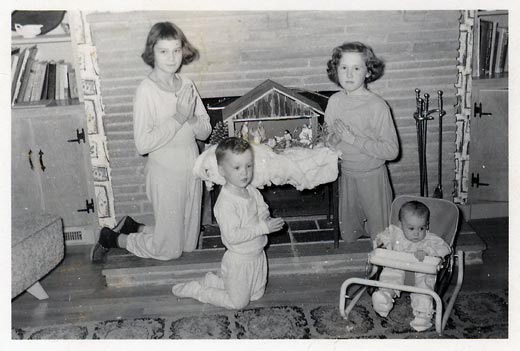 From a Christmas past: the author (center), with his siblings, surrounding a nativity scene in their home.

My three sisters and I were raised in the Roman Catholic Church. Unquestioning as children, we composed “Dear Santa” letters, decorated our Christmas tree, exchanged presents, and attended Christmas Day Mass. In truth, we couldn’t wait for Mass to end so we could return home and play with our toys. Unquestioning as children, we also believed the nuns and priests who told us we were members of the only “one, true, holy, and apostolic church.”

The exclusive hold that the Roman Catholic Church held on Christianity ended in 1520. Then, Martin Luther, a devout Catholic, rebelled against rampant church corruption, famously evident in the sight of priests personally profiting by the sale of “indulgences” to the common person. Indulgences could be used, people were told, to lessen after-life penalties for their sins.

Protestant worship focuses on the words of the Bible instead of the interpretations of a pope. The Lutheran, Presbyterian, Episcopal, Methodist, and Baptist churches are part of the Protestant grouping. There are also many nondenominational Christian churches. It is in the denomination’s worldly view, as measured against such contemporary issues as gay marriage, female ministers, or religions other than one’s own, where differences become meaningful, and interpretation of biblical passages, critical.

Martin Luther died in 1546. Around that time, (Saint) Francis Xavier, the Catholic missionary assigned to Goa, wrote a letter to the Portuguese king requesting an “inquisition.” An inquisition refers to Churchled hearings where non-Catholics either converted to Catholicism or were tortured. After Xavier died, his request was granted. The Goan Inquisition, worse in length and depravity than the more famous Spanish Inquisition, continued for hundreds of years.

It was during the holiday season and on a bus tour in Goa that my wife, Janis, and our friend, Roopal Jain, learned of the inquisition. To that point we had enjoyed the richness and diversity of a Goan Christmas, but such feelings were lost when we learned the stunning truth about Xavier. Yet, such details about the “great saint” were of no consequence to the Indian people on our tour. They raced to the church to find the coffin and take their snaps, but so what, I later considered, because we Christians also race to the symbols—the tree, gifts, and parties—without much thought to the meaning of that long-ago evening in Bethlehem.

We will end our Christmas journey, however, not with a story of a dubious saint or a note about the absence of Christ in Christmas, but with Mrs. Singh of Jodhpur. Goa is now three days distant, and Janis, Roopal, and I are in a small open-air courtyard enjoying our Christmas Eve dinner.

Mrs. Singh, a Hindu, and a former member of Indian royalty, approaches our table.

“I hope you enjoyed dinner,” she says. “Tonight, I am pleased to offer a special dessert. In honor of our Christian guests, and in recognition of this most holy day, I personally baked this cake. May I serve you a piece?”

In a place thousands of miles from home and hundreds of miles from Goa, the very essence of Christ’s universal message of love and acceptance was served by a Hindu. This moment still resonates in the hearts and minds of an Episcopalian, a Jain, and me.