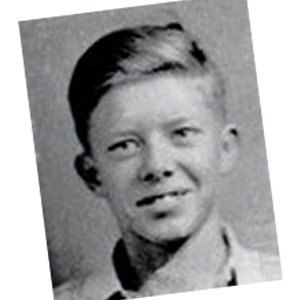 Left: President Jimmy Carter safely handled semi-automatic rifles when he was six and recalls driving the farm pickup at age 12.

The new crop of America’s adolescents, raised by “helicopter parenting,” can learn a thing or two from America’s historic icons.

“By shielding and protecting young people from adulthood, we have isolated them from their elders, from the spiritual roots, and from their heritage, leaving many of them angry and confused in the spiritually empty world of teen culture. We need to reexamine our basic assumptions about young people.…”
—Deepak Chopra

Samuel Clemens attended school until he was 12 years old. Then, due to the death of his father and the accompanying strain on household earnings, he left the classroom and found employment as an apprentice printer at the Hannibal Courier. His “pay” consisted of meager rations of food. Three years later, he took a job as printer, writer, and editor at the Hannibal Western Union, a newspaper owned by his brother, Orion. We know Samuel Clemens better by his pen name, Mark Twain, and his iconic American books, The Adventures of Tom Sawyer and The Adventures of Huckleberry Finn.

George Washington, at age 16, left the comfort of the family home to join a surveying expedition into the wilds of Virginia. Jimmy Carter, president of the United States in the 1970s, safely handled semi-automatic rifles when he was six and recalls driving the farm pickup at age 12. Akbar began his long and glorious rule when he was 16.

What about America’s current crop of teenagers, you ask?

My young-adult daughter, Molly, and I are in a chairlift that will take us to the top of the ski mountain in Big Sky, Montana. A woman who is riding with us whips out a walkie-talkie. “How are you doing?” she asks her husband. “Fine,” he replies, as do two of her three teenagers. But on the last crackly call, we learn that a son has fallen into some deep snow. “Oh my God, do you need my help?” she shrieks. “I’ll come pull you out! What trail are you on?”

There is your answer. Substitute a cell phone for a walkie-talkie and a college for a snow drift, and we have just defined the term, “helicopter parent.”

For decades, America’s adolescents were the best and brightest in the world. Today, they rank 25th in the world in math, 17th in science and 14th in reading, and are seemingly incapable of even pulling themselves out of a frigging snow drift without momma’s help, and I am just getting started.

According to a 2003 survey, nearly 8.5 percent of our high school kids attempted suicide. Our rate of teenage pregnancy is much higher than that of any other country in the industrialized world. Before metal detectors, close to a million teenagers a year brought guns to school. A University of Chicago pollster recently asked 1400 adults to name the age when adulthood begins in the United States. The most popular answer is not 18 year of age. It is not even 21. It is 26!

We have serious problems. No, do not blame our helpless and hapless teenagers, because the fault lies elsewhere, including those fathers and mothers who spawned and parented this underachieving generation. This is the story of how we got into such a dreadful mess and how we might be able to solve the problem.

For perspective, we will travel to the mid-1800s. We meet a farmer, ask him how many adolescents live in his home, but learn that he doesn’t know what that word means. No one else in the country does because from 1492-1904 a person is either a child or an adult.

We spend the day with mom, dad, and their seven kids. The daughters help mom run the household and the sons help dad work the farm. Even the youngest children have responsibilities. Late in the afternoon, when dad announces that the day’s work is complete, the children disappear into the woods to play as they wish. These children will marry in their late teenage years and their transition to adulthood will be smooth and natural.

During our visit, we notice that mom and dad pay scant attention to their children. We are startled, because we are from the age of much smaller, child-centric families, where there is time to cater to our offspring’s interests and needs, plan their activities, micromanage their lives. The notion of a parent-centric family is foreign to us.

We take our leave of this hardworking family and move to the early 1900s. The Industrial Revolution is well underway, so is the transition to a more urban society, and it is in these dynamics where the American adolescent is born. Over the course of several decades, school days and hours will expand, and the rights of eager adolescents to put their developing skills to work will diminish. Sons will no longer work side by side with dad, nor will daughters spend as much time with mom. Spare time increases, as does boredom and anger. The need to mature lessens.

Dr. Robert Epstein, founder of the Cambridge Center for Behavioral Studies, argues that our young people are capable thinkers, want responsibility, and can act with maturity—if given the chance. Instead, for much of the last century we first created and then maintained the myth that young people are “tender, helpless, and incompetent,” and then passed hundreds of laws designed to protect these inept beings. Instead of imposing age-based laws, he suggests we should judge our adolescents on the basis of competency. Why can’t George Washington become a surveyor at age 16? Why can’t an 18-year-old soldier purchase a can of beer? Why can’t a 12-year-old girl hop on her bicycle and deliver newspapers—just like her dad once did?

During the course of studying this topic, not satisfied with simply reading the work of others, I start asking friends, business associates, and random strangers for their views. After I shock them with the notion of 25-year-old adolescents, I ask two more questions. How many hours a day do American adolescents study, and how many hour a day do their Asian counterparts study? I add that the data is self-reported data, meaning the adolescents turned in their own “time sheets.”

All guess that American kids study less than an hour every night, and that Asian kids study at least three hours.

According to Professors Reed Larson and Suman Verma, American adolescents self-reported three hours a night as compared to 4.5 hours per night for the Asians. Tellingly, when I share the data, not one person questions the Asian number. All laugh, loudly, at the inflated American number. In any event, quick math shows that even if the differential is 1.5 hours a night, over the course of five years it amounts to the equivalent of one entire school year. Where do American adolescents spend the 1.5 hour difference in time? Are they putting it to good use? According to the data, American adolescents spend this 1.5 hours watching television or engaging in social media.

The chairlift ride mercifully ends. The woman with the walkie-talkie continues to micromanage her brood. The crisis with her teenage son is over—incredibly, he has managed to pull himself out of the snow drift—so she is now organizing a new lunch time.

Molly, now 23 years old and the director of a nonprofit organization in Boulder, Colorado, looks at me with a bemused expression, and then laughs.

My own mom and dad were traditional parent-centric parents, and as such were much too busy with their own lives to micromanage their 4 children. Sure, there were guidelines, but in matters ranging from play to homework, my three sisters and I were expected to make our own plans and decisions. If we got tangled in a minor mess, mom and dad would say “figure it out.”

Improbably enough, it is my generation, the Baby Boomers, who have led the child-centric revolution. We are the generation that rebelled against authority, yet cling like Saran Wrap to our adolescents. We created the slogan, “Do your own thing,” yet we monitor our children’s Facebook account. I know of one parent who after learning that their college-aged son had a pimple drove two hours to deliver the ointment.

Cultural influences are now too strong to return to the parent-centric family of my childhood. Today, in matters relating from play to homework, adults often control much of their children’s lives, leaving their kids with little room to hear the words they need to hear: “I know you can figure it out.”