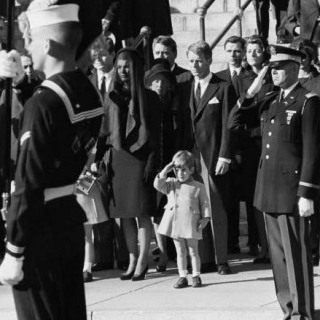 The office had emptied of people, save for the Indian- American woman sitting in the chair nearest my desk. Roopal’s presence was not unexpected, the tears were. I had caused the tears not by questioning any aspect of her exemplary work, but by asking her to share memories of Indira Gandhi. The previous evening I had read a few pages of history and learned that Gandhi once suspended democracy, had a very undemocratic habit of silencing opposition, and was not above using the power of her office for personal gain.

Roopal’s words came spilling out as if that long-ago event had just occurred. I learned she was so young when Indira was assassinated, how Indira was India and India was Indira, and how it was so sad when suddenly there was no more Indira. “Bill, she made us feel good about ourselves, made us feel proud to be Indian, and all such feelings were new to us.”

“I understand,” I said, thinking back to when I was 9 years old and the nun announced to our wide-eyed class that our president, John Fitzgerald Kennedy, had been assassinated. It was the “Age of Camelot,” his widow, Jackie Kennedy, allowed shortly thereafter, and the phrase, which may or may not have been true, stuck. We often remember our leaders through this imperfect balance of history and culture, and it is with this in mind that we review a few important American presidents.

When Franklin Delano Roosevelt, popularly FDR, assumed office in 1932, the prosperous days of the Roaring 20s were gone, replaced by the decade-long Great Depression. The national unemployment rate, which was 3 percent in 1929, rose to 25 percent in 1933. There was no public “safety net” at this time. The hungry stayed hungry.

In his inauguration speech, Roosevelt calmly stated, “The only thing we have to fear is fear itself.”

Within months of taking office, FDR delivered his New Deal, one that would use the full authority of the government to provide “relief, recovery, and reform.” Relief referred to programs that might halt the economic slide, recovery to efforts to kick-start consumer demand, and reform to laws that might rein in the unchecked capitalism of the 1920s.

Many still argue the merits of the New Deal programs, but there is no debate on one point. By implementing much stronger controls over the private sector, by allowing the government to spend more than it was taking in (deficit spending), and by implementing social welfare programs, Roosevelt changed the role of government. 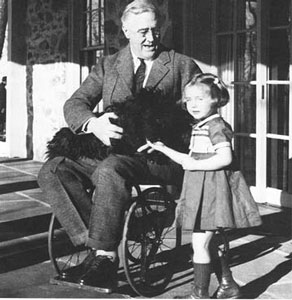 Roosevelt lived during the golden age of radio and used that medium to deliver “fireside chats” from the comforts of his wheelchair. Many Americans never knew that Roosevelt had contracted polio at age 21 and had great difficulty walking. In the late 1930s, with a mind to stamping out this debilitating disease, FDR founded the National Foundation for Infantile Paralysis, better known as the March of Dimes. Today, the disease is nearly gone and Roosevelt’s image is on the coin.

To modern Democrats, FDR is a hero, and a great example of the role government can play in the lives of its citizens. To contemporary Republicans, FDR, with his big spending ways and uncertain results, is an example of “big government” and “overreaching controls.” To my mom, he was a hero, and she wishes she still had his photo that her parents placed on their living room wall.

Shortly after his 1945 re-election for a fourth term, Roosevelt died, leaving Vice President Harry S. Truman to lead America through the conclusion of World War II. When Truman, only a high school graduate, heard the news, he assembled the press and offered,

Boys, if you ever pray, pray for me now. I don't know if you fellas ever had a load of hay fall on you, but when they told me what happened yesterday, I felt like the moon, the stars, and all the planets had fallen on me.

Truman, a no-nonsense man, held dear to the expression “The buck stops here,” meaning, “I will not hide from the tough decision.” When he had to decide whether to use the atomic bomb on Japan to hasten the end to World War II, he ordered the blasts. After his presidency, he returned to his modest home in Independence, Missouri.

Several hundred miles to the west of Independence is Salinas, Kansas, the birthplace of Dwight D. Eisenhower, and the home of his presidential library. Eisenhower (“Ike”), a popular World War II general, served as president from 1952-1960.

I recently toured the Eisenhower Library and in less than 30 minutes covered his eight-year presidency. Since half of the square footage was dedicated to Elvis Presley, the famous singer, I learned about him, too. As the signage in the presidential library indicated, Elvis served in the army when Eisenhower was president.

Fairly or not, Eisenhower is remembered as the ‘Do nothing’ president. He is also remembered for a speech he gave as he departed the office, warning Americans about the dangers of the “military-industrial complex,” the increasingly powerful collection of constituents who profit when our country goes to war.

If my mom’s seminal president is FDR, mine is JFK.

Historians chisel away at Mrs. Kennedy’s “Age of Camelot” by pointing to her husband’s ill-fated Bay of Pigs invasion of Cuba, his escalation of the Vietnam War, and his sometimes indifferent positions on Civil Rights. But if I appreciate Roopal’s memories of Indira, it’s because “we the people” remember JFK in a similar way, from the stirring words of his inauguration speech (“Ask not what your country can do for you, but what you can do for your country”), his determination to have a man on the moon before the end of the decade, his establishment of the Peace Corps, a program that called for young people to serve in underdeveloped nations, and, of course, his assassination.

Lyndon Baines Johnson (LBJ) was sworn into office as soon as Kennedy was pronounced dead. A year later, he was elected president on his own merits and served from 1963-1968.

What an era! LBJ inherited and then, with great misgivings, escalated the messy Vietnam War. Some blacks, frustrated at the lack of social progress, marched peacefully with Dr. Martin Luther King. Some burned our inner cities. Women, upset at their lack of equality, metaphorically, at least, “burned their bras.”

Yet, Johnson, often the object of derision from the high-brow Harvard-educated Kennedy clan, em- erged as an important president. He declared a “War on Poverty.” His Great Society legislation poured millions of dollars into social programs. Whether we see such programs as effective or wasteful is usually a function of whether we are Democrats or Republicans.

The presidents who followed Johnson from 1968-1980—Richard Nixon, Gerald Ford, and Jimmy Carter—each had notable moments. Of the three, Nixon’s life and presidency is the most interesting. Sadly, at the expense of his great foreign policy achievements, he is most remembered for the Watergate debacle, a criminal act of party underlings that he attempted to cover up, thus causing him to resign from office in order to head off impeachment.

We will end our journey with the remarkable Ronald Reagan. Some critics deemed that the then- 69-year-old Reagan was too old to serve in 1980, the year he ran against his Democratic opponent, Jimmy Carter. When asked about his age and stamina four years later, Reagan humorously turned the tables on Mondale by replying, “I am not going to exploit for political purposes my opponent’s youth and inexperience.” The “old man” proceeded to carry 44 out of the 50 states in the general election. When the 1984 electoral votes were counted, President Reagan won an incredible 49 out of 50 states! How could this staunch Republican win so many hearts and minds?

Nearly two decades after President Reagan left office, I visited our company’s offices in Irvine, California. There, I met with one of our technicians, Nabor Mejia, who had previously gone “above and beyond” for one of our customers.

“How did you end up in the United States?” I asked Nabor.

“My parents came across the Mexican border in the late 1970s,” Nabor offered, “but since my parents were ‘illegals,’ they couldn’t find good work and didn’t have any rights until 1986. In that year, President Reagan approved a bill that granted amnesty to nearly three million people. This may sound odd, but today I have a picture of Ronald Reagan in our living room. He changed our lives.”

“No, Nabor, it doesn’t sound odd at all,” I offered with a smile. “My mom has a similar story.”