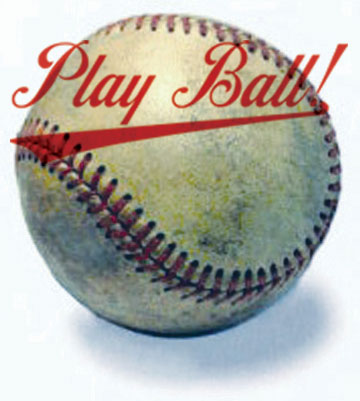 A storied look at our national pastime

In April, major league teams will leave their practice fields in Florida and Arizona and head north for the start of another season of major league baseball. Football is popular, to be sure, but its ascension is too recent for its history to offer much in the way of legend or lore. Baseball, on the other hand, with its century-long history and accompanying roster of epic personalities and legendary teams, is a sport deeply woven into American culture. With the opening pitch of the season just a few days away, this is a fine time to “step up to the plate,” and learn about the icons that transcended the sport, and by doing so, became permanent additions to American culture.

We will begin with the story of George Herman Ruth, better known as Babe Ruth.

In 1919, the future of baseball was in doubt. The game had been tainted when eight players on the Chicago White Sox were accused of betting against their own team in that year’s World Series. Some of the players protested their innocence, and all were later acquitted of criminal charges, but no matter the claims or verdicts, the sport had been damaged. A hero was needed, perhaps one shaped along the lines of an “all-American boy,” that is to say a dashing, well-built good-looking man, one with such a humble nature that he would drop everything to help an unknown granny cross a busy street.

Instead of the all-American kid, we got Babe Ruth. 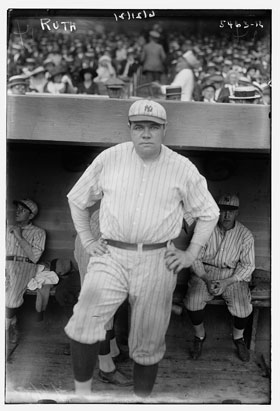 Sure, he’d help granny across the busy street, but he might have done it with whiskey on his breath. Babe enjoyed the bars at nights as much as he enjoyed the games of the day. Our unlikely hero did have a special love of children and orphanages. Not surprising, really, when we consider that Babe grew up in a Baltimore orphanage. America’s future hero, with the legs of a chicken and the stomach of a maharajah, was hardly a dashing figure.

In late 1919, a competitor of the Yankees, the Boston Red Sox, sold Babe Ruth to their rivals for the then-unheard-of sum of $100,000. On that very day, the Boston fans believe, “The Curse of the Bambino” began. A mighty curse it was by anyone’s reckoning, for 85 years passed before the Red Sox won another World Series. During that same period of time, the Yankees won 26, and in the process, became the most famous team in all of sport.

In Babe’s first season with the Yankees, he slammed 54 home runs. A home run is a rare event, for it takes great athletic prowess to smash a pitched ball high enough and far enough to clear a distant fence. Babe’s home run total was more than any other American League team hit that season!

People who had never had an interest in the game flocked to stadiums across the country to witness the Babe’s great hitting prowess. To accommodate the extra fans, the New York Yankees built a new stadium nicknamed, “The House that Ruth Built.” For the remainder of the decade, known as the “Roaring ’20s,” and well into the Great Depression years of the 1930s, the “Sultan of Swat” thrilled millions with his swing.

The Babe has an exalted place in American sport because of his home run totals and the impact he had on a struggling game. But statistical totals alone are not enough to secure a place in culture and history. Here was our first national sports hero, a flawed one at that, swatting home runs during the days, drinking thirstily into the night, and reaching out to all with those yearning eyes and open heart.

When the Babe retired in 1935, the game continued with no loss in popularity. New heroes arose in the sport. There was Lou Gehrig, a teammate of Ruth’s late in Babe’s career, whose simple 1939 speech at Yankee Stadium—“Today, I consider myself the luckiest man”—is considered an American classic. The day he gave that speech, Lou Gehrig was dying of a disease known today as “Lou Gehrig’s disease.” When Babe Ruth impulsively hugged his dying ex-teammate, there wasn’t a dry eye in Yankee Stadium. Gehrig’s memorable speech is available on YouTube.

In 1947, another legendary figure, Jackie Robinson, played his first game for the Brooklyn Dodgers. Jackie Robinson did not break any of the Babe’s records and he never gave a speech to equal that of Lou Gehrig’s. His only claim to fame in this crazy American democracy, the place where the founders of our country once wrote that we are all created equal, was that he was major league baseball’s first black player.

Jackie’s Brooklyn Dodgers were the cross-town rivals to the regal New York Yankees. This was indeed the Golden Age of baseball. If part of sport is to root for our team while we demonize the opponent, so clear the lines must have been during this epic era. For years, the Dodgers, led by Jackie and his swash-buckling and swaggering style of play, fought for the championship against the all-white Yankees. Inevitably, and often in the most gut-wrenching fashions, the Yankees, save for one year, won all the championships.

For those interested in reading about this golden era, I recommend The Boys of Summer by Roger Kahn. Kahn, necessarily, describes the details of some of the game, but the strength and emphasis of the book is in its profiles of these Dodger players who comprised major league baseball’s first integrated team. In Part 1 of the book, Kahn, who, as a young man traveled with the team during this era, takes us “inside the locker room,” as we meet Jackie, his supporters and his teammates. Part 2 of the narrative is set decades later, as Kahn travels the country and interviews the men who were once part of one of baseball’s most famous teams. I didn’t need to understand cricket or Indian history to benefit from Lagaan, and so you will find The Boys of Summer. 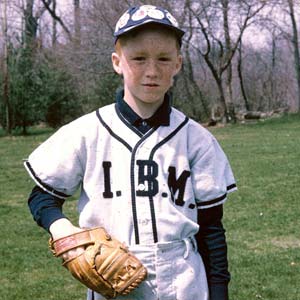 Left: The author in a springtime past....

Though I didn’t know it then, when I was a young boy in the mid-1960s the sun was setting on the Golden Age of baseball. Since I grew up in Poughkeepsie, New York, I adopted the Yankees, led by their blond-haired, blue-eyed star, Mickey Mantle, as “my team.” No one advised me of the importance of this early selection. After all, Americans are likely to have fewer favorite teams in their lifetimes, than spouses! Quit laughing, this may be true! We marry teams for life!

In 1965, my dad took me to a baseball game at “The House that Ruth Built.” We sat in the right field stands that evening, only yards from where the legendary Number 3, Babe Ruth, once played. Only later in life did I come to know how painful it was for Dad to point to the monument honoring the legendary Babe. He revealed his pain in 1997, the year that he and I attended a Boston Red Sox game in legendary Fenway Park. He was reminiscing about the days his own dad, my grandfather, would take him to baseball games in the 1930s. And then, from “out of left field,” a baseball and cultural slang meaning “from out of nowhere,” he just blurted, “I’ve always hated those damn Yankees!”

Well, he didn’t really say that. He really said something much worse!

A moment of silence passed. Should I attempt to console my dad?

Then, he started to laugh and I joined in. What a quintessential American moment! I thought we’d never stop laughing!

My dad died a few years ago. Some of my favorite memories of this great man are the times that he and I spent playing “catch” in the front yard of our Poughkeepsie home. He’d come home from work, remove his coat and tie, grab a few balls, and then he and I would head to the front yard. Few words were spoken. He’d toss the ball, I’d run after it, and hopefully catch the ball in the style of one of the great New York Yankee legends, giants of the game like Ruth, Robinson, or Mantle.

Later in life, it was my turn, as my daughter Molly and I played catch in our front yard.

And that’s it, isn’t it? National pastimes should be passed from generation to generation, and should be accessible to all. If they aren’t, they are merely games with numbers, and not pastimes with legacy. The acclaimed movie, Field of Dreams, does a terrific job of telling this story.

Ladies and gentlemen, it is April in America. Let’s “play ball!”

A treasure trove from the Library of Congress:
http://www.americaslibrary.gov/jp/bball/jp_bball_subj.html

sometimes used for humor and now used to point out the value of quiet time for meditation and creativity:


Baseball Song:
The chorus is the "unofficial anthem" of the game.
Take me out to the ballgame
http://kids.niehs.nih.gov/games/songs/childrens/ballgamemid.htm
http://www.youtube.com/watch?v=XeD10D8wFaA&feature=related

• Louisville Slugger Museum & Factory - Louisville, KY
www.sluggermuseum.org/
It takes a special place to craft the Official Bat of Major League Baseball. ... A visit to the museum shows you how the sport has changed a bit between then and ...

And many more--Americans love baseball!