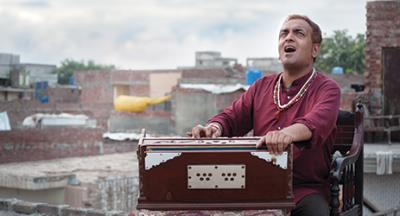 Prepare to be mesmerized by Song ​of Lahore, a lovely documentary directed by two time Oscar winner Sharmeen Chinoy-Obaid and Andy Shocken. To clap along. Hum along. To fall madly in love with the Sachal Jazz Ensemble and their mission to make, according to founder Izzat Majeed “global music that is rooted in Lahore.”

In order to preserve Pakistan’s fading musical roots, Majeed established the Sachal recording studio in Lahore and gathered the best of Pakistan’s classically trained instrumentalists, mostly aging men from extremely humble backgrounds, to revive the music he had grown up on. However, when his orchestra’s instrumentals got no love from the locals, jazz lover Majeed had the brilliant idea of rendering Dave Brubeck’s jazz classic, Take Five, through traditional instruments: the sitar, tabla, naal, flute etc. He uploaded this effort on You Tube. The video went viral. BBC took note. The orchestra was obscure no more.  In 2013, the Sachal Jazz Ensemble traveled from Lahore to New York to collaborate with the prestigious Wynton Marsalis Orchestra and play Jazz at Lincoln Center. Song of Lahore beautifully captures this journey of recognition against all odds.

In the early half, we see the ensemble with their families, their daily struggles and their camaraderie during rehearsals. A vibrant Lahore, and the Punjabi dialect, is captured through a camera which knows just when to pan over inner city Lahore’s chaotic traffic or linger on a rooftop as an ensemble member sips from his chai or chisels a handmade flute out of bamboo. The latter half takes us to New York City and whether the ensemble can hold their own in the Big Apple. Where part one was bathed in soft pathos, part two is often a rollicking, humorous romp. Though the ensemble is worried that rehearsals are not going well, in fact the sitar player has been let go, their excitement at being here is palpable. A night walk through Times Square means Asad Ali joining an underwear clad street guitarist in singing John Denver’s Bring Me Home, Country Roads. Nijat Ali breaks into laughter at seeing Spider-Man posing for pictures and declares “Even Spiderman has to work the streets here.” Coming across a musician playing drums on plastic buckets, the Sachal ensemble decide he is a poor musician, just like them. They leave him a tip. The most poignant observation comes when they agree that “The clerics don’t let us breathe back home. Here we are enjoying ourselves. Praise God.”

But Song of Lahore is so much more than Pakistan to America. It is part nostalgia as violinist Saleem Khan shows his teenage son his treasured black and white photos of happier times, at one point breaking into tears as he recounts an era in which musical skills alone could provide a decent living. It is a father/son tale as harmonium expert Nijat Ali takes over the mantle of conducting from his ailing titan of a father and vows to do him proud no matter what. Most of all it is a tale about identity and loss and revival of a musical culture.

Already maligned on account of morals which tend to look down on the performing arts (upon moving into a middle class neighborhood, flutist extraordinaire Baqar Abbas talks about having to hide the fact that he is a musician from his neighbors), Pakistan’s traditional music industry was thrown into complete disarray after General Zia-ul-Haq’s 1977 military coup and his declaration that music was a sin. Song of Lahore employs chilling footage to show Zia’s Islamicizing of Pakistan, the effects of which are felt even today.

Since then, however, Pakistan has seen several regime changes and consequently much softening towards the arts. Now Ijjaz Maijeed states “We are living in a society that has forgotten who they are. The younger generation has absolutely no clue what our music means. They look to rock and roll, and key boards and synthesizers.”  The Sachal Jazz Ensemble has gone a long way in filling this gap, their Pakistani Jazz and its blending of East and West readily appealing to this younger generation.

Chinoy-Obaid has received Oscars for her women-centric documentaries (‘Saving Face’ and ‘A Girl in the River: the Price of Forgivness’) but Song of Lahore, except for the occasional glimpse of an ensemble member’s mother, or very young daughters, and the odd burqa clad woman on the street, is a song without women. What happens to the ensemble’s sisters, daughters, wives, mothers who are interested in music?

As Song of Lahore reaches its conclusion, the tension is spellbinding. The Lincoln Center Hall is packed. Backstage the ensemble gathers for a final prayer. Behind them, Ella Fitzgerald smiles on a 39 cent black heritage stamp.  The show begins. Will Ballu Khan’s tabla solo soar? Will Rafiq Ahmed and Najaf Ali, father and son, be able to drum magic from their naals? Will Baqar Abbas’ flute hold its own against Ted Nash’s piccolo? Will Nijat Ali as conductor be able to live up to his father’s legacy? Or will it all end in fiasco? Whatever the case Song of Lahore is pure joy.