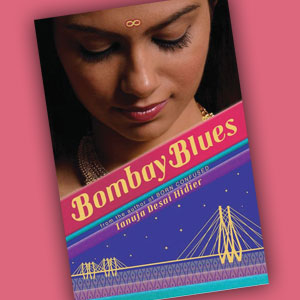 There’s a transition we all make from adolescence to adulthood, a unique journey that comes with emotions and growth and will never be like anything we experience. It is also a time where learning more about where we come from and what our story is become extremely relevant and important to our inner selves.

Dimple Rohitbhai Lala, a young Indian-American girl, experiences that transition in Bombay––a place that requires flexibility, forcing one to adapt in unexpected ways. Dimple is wide-eyed and spirited, with a sense of adventure, and her excitement for India jumps through the pages of Bombay Blues. Incidentally, she was also the protagonist in Hidier’s Born Confused.

The adventure takes place in India’s premier metropolis during a family wedding, where people and their stories throw up a bunch of surprises. Dimple meets people who influence her, throw her off her path, and she learns that things are not always what they seem—a constant teaching in life. The young Dimple is also the vehicle that Hidier uses to explore her own family roots, and inspire her readers to do the same.

“I’d only lived in Bombay for about a year shortly after birth,” said Hidier. “I’d visited a few times in my childhood, mostly staying with my grandparents. The city was a mystery—but still felt like a mystery in my blood, quite literally, as it’s the city of my family history.”

Hidier captures the awestruck demeanor of the first-time traveler stepping into India and how one adapts to the organized chaos that is Mumbai (or any Indian metropolis, for that matter).

Bombay Blues also adds an unusual element to the experience of the city in the form of an innovative “booktrack,” which is a soundtrack (titled Bombay Spleen) whose songs are integral to the novel, although they can also be enjoyed separately. Hidier considers it a dedication to Bombay, rather like an ode to the city’s music scene that is referenced so vividly in the novel.

“Although Bombay Spleen can be heard independently, the book and the music are one tale relayed across multiple media. It’s a love song to Bombay,” she said. “Bombay Blues is my prose poem to Bombay and Bombay Spleen is the sonic part of this same tale.” The music video for the album track “Heptanesia” aired on MTV Indies.

Bombay Spleen has a link to Charles Baudelaire’s Le Spleen de Paris, a collection of poems about Paris that Dimple is reading when the story opens.

In literature, the color blue is used to symbolize calmness and relaxation—a far stretch from the noisy chaos that is Bombay. But it is also used to invoke truth—the undercurrent of Dimple’s journey in Bombay Blues. In music, it’s a style that evolved from African-American spirituals, and it is a loose narrative on troubled experiences.

It was also a color that Hidier felt emanated from Mumbai during her time there. “As I spent more time there, blue began to overwhelm. The blue-skinned gods, fisherboat bellies, Mount Mary, the sea and sky, that hue led me to the idea of exploring the ‘bigger’ blue: music, mood, the wild blue yonder.”

It is easy for readers of any age to relate to Dimple because, though our characters and life stories may differ, the foundation of her story is a universal one.

“Dimple is any one of us who has ever wondered if they have a story. And to these people, I would like to say, ‘you do,’” added the London-based author. 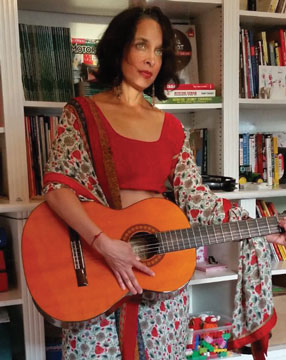 Hidier (pictured at left) used her own internal conflicts to express her grappling with dual cultures. “I was not recognizing the value of my own story. I wanted to write an Indian-American story—but felt I wasn’t Indian enough nor American enough to do so,” she said.

Regardless of culture, Dimple is a person in search of home like all of us. She moves through her adventure in India in an open-ended search—unsure of what she is looking for, but knowing it has to be found. Inevitably, reading this book leads us to reflect on our own personal journeys: how we must keep getting ‘lost’ in order to find ourselves, learning to live in our skin, shifting between cultures, time frames, relationships, family, and friends, and between ‘shoulds’ and ‘wants.’

Although Bombay Blues is considered a young adult novel that explores much of the confusion we face during the transition from adolescence to adulthood, the journey of Dimple is a testament that our stories are never fully complete.

We evolve, we move on, and so does our story.

Devika Rao is a freelance writer. She writes a weekly column (“Doing Good”) for The Atlanta Journal-Constitution.