Books : Fresh insights into the making of the Mahatma 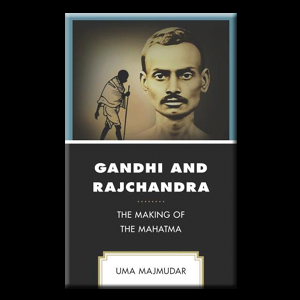 Uma Majmudar’s Gandhi and Rajchandra shines a light on the seminal yet often overlooked influence of Shrimad Rajchandra— a Jain mystic, poet, and businessman—on Mohandas Gandhi.

Neither his critics nor his admirers would dispute that Mahatma Gandhi’s status as a historical figure is virtually godlike. As Lord Mountbatten, India’s last viceroy, said in his tribute, “Mahatma Gandhi will go down in history on par with Buddha and Jesus Christ.” Given such a standing, it is hardly surprising that the human side of Gandhi has largely been downplayed in discussions about his life and message. It is easy to get the impression, after all, that Gandhi came into the world already as a Great Soul. Clearly, there is a tendency for us to presume that he was free of the internal struggles and challenges which so commonly characterize the lives of us “everyday people.” These kinds of impressions are unfortunate; they ultimately keep us from seeing that Gandhi’s life story includes much that we all can relate to as well as successfully apply to our own life situations. In Gandhi and Rajchandra: The Making of the Mahatma (Lexington Books) Uma Majmudar does much to fill this dearth of insight. 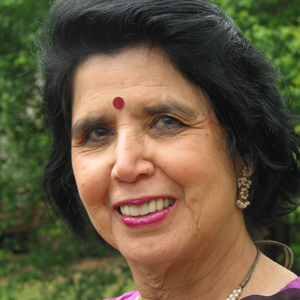 Majmudar, who teaches philosophy and religious studies at Spellman College in Atlanta, is familiar to regular readers of Khabar as her commentaries have frequently appeared in these pages. In Gandhi and Rajchandra, she explores the distinctive, indeed unparalleled, influence of the great Jain businessman, mystic, poet, and scholar, Shrimad Rajchandra, on Gandhi. She, in fact, compellingly makes the case that without Rajchandra, the man who the world would eventually revere as the Mahatma could never have come to be. In discussing Rajchandra’s influence, Gandhi wrote, “I have met many a religious leader or teacher . . . and I must say that no one else ever made on me the impression that Rajchandbhai did.” While many scholars have emphasized the significance such Western intellectual giants as Henry David Thoreau and John Ruskin have had on Gandhi, the impact of Rajchandra on his life is not as well known. Though it is indisputable that Gandhi’s influences were eclectic, this work shows that he was, above all, groomed and fermented by cultural currents that were distinctly Indian.

Majmudar comparatively discusses the role that various “heavyweight spiritual champions” played in the Mahatma’s development and concludes, “Rajchandra alone would have the distinct honor of winning Gandhi’s heart and soul.” (p. 75)

She states: “The distinct contribution of Rajchandra as a teacher was to be the first faith figure to recognize Gandhi’s yet unarticulated spiritual aspirations, and to help them grow... By his own example, Rajchandra taught Gandhi how to conduct one’s business with truthfulness. Also, from the poet, Gandhi first learned the art of integrating the spiritual, ethical, and worldly spheres of life with equilibrium and without sacrificing the main goal of Self-realization.”(p. 76)

Majmudar nicely provides a comprehensive historical narrative of the evolution of Gandhi’s relationship with his beloved teacher and mentor. Along the way, she illuminates particular struggles Gandhi coped with while he was on his way to becoming one of the greatest, most influential spiritual and social leaders in human history. Members of the Indian diaspora can find, in these pages, a genuinely relatable Gandhi who (particularly when in South Africa) encounters serious difficulties in maintaining his own cultural identity, while at the same time seeking to incorporate the best aspects of the dominant colonial culture that was aiming to change him. Majumdar cogently shows the indispensable place Rajchandra had for Gandhi in resolving such challenges. In the first of the two Appendixes provided, she reproduces 27 questions, along with the responses they evoked, which a religiously conflicted Gandhi posed to Rajchandra. These exchanges occurred after Mohandas had arrived in South Africa and encountered relentless pressure from non-Hindu friends to change his religion. Majmudar shows the vital significance this dialogue had for the formation of Gandhi’s identity by citing his own assessment of it:

“(Rajchandra’s) replies were so logical, appealing, and convincing that I regained my faith in Hinduism and I was saved from conversion of religion. From that moment onwards, my respect and admiration for Rajchandra increased by leaps and bounds and I considered him to be my religious guide till he died and even after.” (p. 81)

In addition to underscoring points related to inter-religious dialogue, this Appendix provides a helpful context by which the reader can better understand those aspects of Gandhi’s life (most notably his attitudes toward human sexuality) that have long struck others as eccentric.

While the area of Gandhi studies has been saturated by many great works that are worthy of our attention, Majmudar gives us a genuinely unique and valuable addition to this always relevant field.