Books: WHOSE INDIA IS IT ANYWAY? 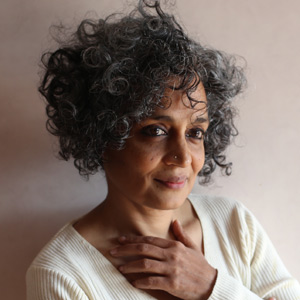 Arundhati Roy’s second novel, The Ministry of Utmost Happiness (Knopf), coming two decades after her best-selling, Booker Prize-winning debut, is a richly complex—if sometimes confusing—mosaic of characters, issues, and situations that asks, “What does it mean to be Indian, and whose India is it anyway?”

In the mid-1990s a young woman named Suzanna Arundhati Roy, an architect who had also written an award winning screenplay, completed a novel she’d been working on for five years. The God of Small Things concerned a set of precocious Indian twins, their English rose cousin, and their divorced-disgraced Syrian Christian mother and her lower caste Hindu lover. Roy submitted her manuscript to author Pankaj Mishra who at the time worked in India’s still nascent publishing industry. Mishra sent it to British literary agent David Godwin. Godwin, in turn, was so impressed by the novel that he immediately flew to India to meet with Roy who signed as his client because, she said “the book had obviously touched him enough to get on a plane and come to a strange country.”

What followed was a writer’s dream as the novel went to auction and sold worldwide. Roy’s literary star rose further when it received dazzling reviews heralding Roy’s use of language, a structure showcasing the novel’s doomed love story, and a masterful exploration of the misuse of power and privilege. When the novel was awarded the prestigious Booker Prize in 1997, the same year that India and Pakistan celebrated 50 years of independence from British Raj, Roy went from being just a breakout debut author to a symbol of postcolonial triumph.

Much was made of the fact that Roy was the first Indian woman to win a Booker, previously won by V. S. Naipaul (In a Free State, 1971) and Salman Rushdie (Midnight’s Children, 1981). Much was also made of the fact that, unlike her predecessors, Roy was not a diaspora writer but born, bred, and living in India. Too much also began to be made of her being pretty, petite, and the owner of long, gorgeous hair.

Roy—this would be a taste of the iconoclast she is—promptly chopped off her hair. She also largely shunned the literary celebrity lifestyle. Instead, Roy’s next offering was a searing essay criticizing India’s pride at the 1998 nuclear tests while masses toiled in poverty. Such political stances by those meant to stay within the bounds of ‘celebrated novelist’ were not appreciated; however, Roy did not back down. She continued to publish essays on polarizing topics including tribal rights, religious extremism, capitalist greed, Kashmir, American foreign policy, and the ills of globalization. India’s most famous novelist also became the country’s most notorious social activist, both at home and abroad, with each provocative essay thrusting her further into the limelight. Meanwhile, fans of the lovely God of Small Things—large and growing—eagerly awaited her second novel. Twenty years later, their wait is finally over. 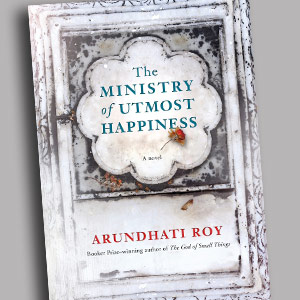 Arundhati Roy’s ambitious second novel is not an echo of The God of Small Things, though it covers similar caste and communal concerns. Whereas her debut novel told the story of one family, her second novel valiantly reflects all of Roy’s political preoccupations of the past two decades.


The novel follows two main characters in separate storylines which converge at the end. Anjum, born Aftab, is a transgender who leaves her loving Muslim birth family for homes of her own choosing and making. Then there is Tilo, a South Indian enigma of a woman who ends up a freedom fighter. Anjum and Tilo’s lives are populated by a vast cast belonging to every strata of society who are also survivors, or not, of myriad tragedies such as Indira’s Emergency, the Gujarat riots, 9/11, the Bhopal gas leaks, Hindutva, beef eating massacres, and the plight of untouchables, tribals, and Kashmiris. These arresting stories could have made full novels in their own right. There is Dayachand, an untouchable cow skinner who renames himself Saddam Hussein. Emaciated Dr. Azad Bhartiya, on a perpetual protest fast against society’s ills. Street dweller Gulabiya Vechaniya who goes blind guarding elite art work. There are Tilo’s three college buddies who love her, Naga the human rights journalist, Biplab the IB officer, and Musa the Kashmiri freedom fighter. As it is, all these people flesh out the central question of the novel—what does it mean to be Indian, and whose India is it anyway?

On a first read, the novel’s nonlinear timeline can be confusing. It took a second read for the sprawling narrative to transform into the spectacularly well-written spider web it is. Anjum and Tilo’s story lines reverberate through recurring images and tropes such as movie posters, severe haircuts, and animals. In fact, animals and their fates are one of the strongest connective tissues across the myriad story lines, be it a rabbit devoured by a cat, Payal the mare, Sultan the rooster, two delightful Kashmiri kittens, Biroo the dog, a lame donkey, a dung beetle, or a crow that hangs in midair like a martyr on a cross awaiting its beautifully poignant rescue.

Roy’s prose is often lyrical—“the bullet wound looked like a cheerful summer rose arranged just above her left ear”—and she is excellent at injecting wit and levity into situations. For instance, Anjum “particularly enjoyed B-grade Hollywood vampire movies and watched the same ones over and over again. She couldn’t understand the dialogue of course, but she understood vampires reasonably well.”

The most breathtaking parts of the novel are the story of Revathy, the tribal woman, and the Kashmiri sections. In both, unsentimental prose cuts to the heart of independence struggles and the people compelled to join them. Readers familiar with the wonderful works of contemporary Kashmiri writers such as Basharat Peer, Shahnaz Bashir, Mirza Waheed, Aarti Tikko Singh, and Feroz Rather—and films like Haider and Half Widow—will yet be haunted by Roy’s chilling accounts of women and children killed by stray bullets, the laments of the Mothers of the Disappeared, and once-upon-a-time cinema halls turned into blood curdling torture centers. The “Kashmiri-English Alphabet” alone is a masterpiece for its stunning impact, and well worth reading the novel. There are so many memorable characters in this novel, but Amrik Singh, an Indian army interrogator, who comes to a bad end in Clovis, California, as do his abused wife and their three young sons, is particularly unforgettable and reminiscent of Hannah Arendt’s concept of the banality of evil.

Roy’s prose occasionally slips into an essayist’s tone and information dumps. And, as lovely as it is to find Urdu, Sanskrit, and Kashmiri liberally sprinkled throughout the novel, the method of following them with stark English translations rather than meaning blended into context is quite jarring. The dementia ridden ramblings of Tilo’s mother also go on for too long for no apparent reason.

Yet, despite missteps, Roy effectively couples her shrewd eye for man-inflicted tragedies with her tremendous compassion for everyone. The Ministry of Utmost Happiness is bursting with respect and heart for the downtrodden, the different, the underprivileged, the voiceless, the doomed, those whose parents put a gun to their heads, those who are merely abandoned, and those who are found and saved. ‘We make our own families’ is the take away from this exquisitely complex novel. We must make our own families in order to survive life’s random cruelties. As Anjum states at the very beginning, “I am not Anjum, I am Anjuman. I’m a mehfil, a gathering. Of everybody and nobody, of everything and nothing. Is there anyone else you would like to invite? Everyone’s invited.”

Soniah Kamal’s 2017 TEDx talk, “Redreaming the Dream,” is about regrets and second chances. Based in Atlanta, she’s an award-winning novelist whose An Isolated Incident was a finalist for the 2016 Townsend Prize for Fiction.