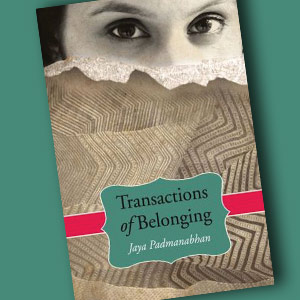 The stories in Jaya Padmanabhan’s Transactions of Belonging are set either in India or the U.S., and they seem to be arranged in such a way that the reader goes from denser, heavier subjects to the lighthearted and airy. And though short, the collection amply displays her ability to tackle different narrative styles, ranging from first or third person to letters and even drama.

Humans are innately relational beings. Our lived experiences are molded by our ties (or the lack of it) with other humans. Relationships pull, tug, push, transform, explode, fuse, and suffuse. Almost every mortal act is an action or a reaction to our relationship with the other, and our sense of place and belonging is in turn determined by that relationship. It is, in other words, a “transaction of belonging.”

The stories in Transactions of Belonging (Leadstart Publishing), Jaya Padmanabhan’s debut short story collection, are about the ebb and flow, the highs and lows, the centrifugal and centripetal forces that bring humans together and pull them apart. The writer is not new to the publishing world: her day job is editor of India Currents, a California-based monthly publication, and she has previously won fiction writing contests for the stories “His Curls,” “Neyyappams,” “Curtains Drawn,” and “Mustard Seeds.” “His Curls,” for instance, deals with the constant fear that resides in a mother about her son’s behavior—is he mine, is he deviant? Is he capable of terror? The ending is ambiguous and it allows for a deeper engagement between the story and the reader.

“As a writer, I like to leave the reader simple clues so that the task of figuring out connections, dotting i’s, and crossing t’s becomes a fun engagement,” Padmanabhan adds in an interview. “Reading is passive unless you are wholly engaged and this is my way of engaging the reader. There are other possibilities and the challenge is in thinking through each possible scenario.”

In “Neyyappams,” a young boy wonders about his place in his family and if he truly belongs. This story grew from her grandfather’s childhood experiences in Kerala, Padmanabhan points out, and in it, the author deftly explores the eternal dilemma that befalls the middle child—where is my rightful place in the family? Do I belong? Am I a mere filler between the heir and the darling? In “The Little Matter of Fresh Meadow Feces,” Padmanabhan weaves in the intergenerational tensions of Indian families living in the United States. The narrative form employed in this story—letters in first person exchanged between characters spanning continents, and personal journal entries—is especially suited to this piece and highlights the awkwardness of direct confrontation in parent-child relationships, a theme that will resonate with Indian readers. In “Strapped for Time,” Padmanabhan writes about the seemingly mundane yet intimate rituals of aging, and the inevitable loneliness of an old man who looks forward to the daily routine of his housekeeper.

The stories are set either in India or in the U.S., and seem to be arranged in such a way as to take the reader from dense, heavy subjects to the light-hearted and airy. Padmanabhan adds, “I left India, but India hasn’t left me. When I write, images of India flood my imagination in all its glory and chaos. It was Nadine Gordimer who once said, ‘Writing is a process of synthesis, the taking of strands from one place and another ….’ For me, India is one strand and the United States another. My writing is influenced by where I live and reflects where I once was. I don’t think I’ve written enough about India, and in the process of writing, I’m coming to grips with a country that I may have wanted to get away from in my youth, but one which I’d like to cling to in my maturity.”

The collection, though short, amply displays Padmanabhan’s prowess as a writer adept at toggling different narrative styles. Some stories are rendered in first person; “Indian Summer” is presented as a play while “Mustard Seeds” is set to lyrical prose. The process of writing, for Padmanabhan, is “much like writing software code. One statement should logically follow the next, and if it doesn’t there must be a reason why not, and often the logic is the most critical aspect of writing.”

If this debut collection is any indication, the world of Indian writing in English is set to welcome into its fold a writer with an intimate understanding of the human experience. Padmanabhan is currently at work on her first novel, titled The Eleventh Letter, set in Kerala.

Girija Sankar, who works at an Atlanta-based NGO, is a freelancer writer. Her work has also appeared in Eclectica, JMWW, Alimentum, Youngzine, and Muse India.