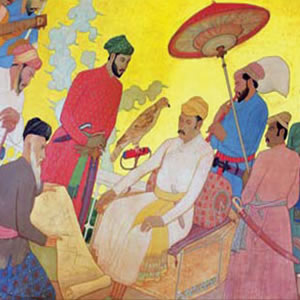 When Sir Herbert Baker designed the new building of the High Commission of India (India House) in London in the 1920s, he provided high vaulted ceilings on the ground ﬂoor, as well as a huge central dome, as readily available spaces for decoration. India’s High Commissioner, Sir Atul Chatterjee, who had proposed the building of India House in 1925, was persuaded by Sir William Rothenstein (1872-1945), the Principal of the Royal College of Art in London, to select artists from India to paint these vacant spaces in the reception areas of the new building. The actual painting of the murals began only after the building was opened ofﬁcially on July 8, 1930 by King George V, and was completed in January 1932.

The most striking feature of the art of India House is its organic link with contemporary movements in Indian art, especially the Bengal School. This was due in no small measure to the vision of Rothenstein, who had been active in the Royal Society of Arts, London. Along with Ernest Binﬁeld Havell (1861-1934), the former Principal of the Government School of Art in Calcutta from 1896 to 1905, Ananda Coomaraswamy (1877-1947), Lady Christiana Herringham (1852-1947), and Thomas Arnold, among others, Rothenstein founded the India Society on 13 January, 1910 in order to encourage an appreciation of Indian ﬁne art. It was Coomaraswamy who introduced Rothenstein to the works of one of the leading artists of the “Calcutta” school, Abanindranath Tagore.

Rothenstein recounts in his essay, “An Indian Pilgrimage,” how his decision to travel to India in 1910 to see Indian art for himself was due to Lady Herringham. Prior to his visit to India, Rothenstein had been warned by Sir Richmond Ritchie, Secretary in the Political and Secret Department at the India Ofﬁce, that his “sympathy for Indians and for things Indian would encourage the Nationalists,” but he did not heed this advice.

Rothenstein’s visit to Benaras left vivid impressions on him, “the crowded, coloured, agitated scene” reminding him of “a classical city; of Corinth or of Carthage; and again, in the densely packed streets, of medieval Rome”. His painting “Sunset at Benaras” was presented to India House after the building was opened in 1930, and hangs in the Nehru Hall of the building today.

When he reached Calcutta, Rothenstein was met by Abanindranath Tagore, along with his brother Goganendranath, who took him to their family home, Jorasanko. Rothenstein interacted with the artists of the Indian Society of Oriental Art in Calcutta. Apart from Abanindranath and Goganendranath Tagore, this group included Nandalal Bose and Asit Halder. Abanindranath and his contemporaries had popularized their contemporary art movement, which became known as the “Bengal School.” They looked to ancient murals and medieval Indian miniatures for inspiration in their choice of subject matter and in the use of materials such as tempera. Signiﬁcantly, these styles and inﬂuences were to ﬁnd exquisite expression in the art of India House twenty years later.

It was at Jorasanko, in February 1911, that Rothenstein ﬁrst met Abanindranath’s uncle, Rabindranath Tagore. Rothenstein was deeply impressed by Rabindranath, whom he described as “one of the most remarkable men of this time”. The meeting between the Indian poet and the British artist was to prove signiﬁcant in propagating the appeal and creativity of Indian nationalist thought in the West. Rabindranath visited England during 1912 and 1913. On board the ship, he took up the poems of his Gitanjali, ﬁlling up a notebook with translations of the collection from the original Bengali into English. Soon after his arrival on June 16, 1912 Tagore sought out Rothenstein, who took the notebook of English-language translations of poems from Tagore and had copies typed. On July 7, 1912 Rothenstein arranged for the poems to be read at his rented house in Hampstead by the poet W.B. Yeats. On November 1, 1912 the India Society published a limited edition (750 copies, of which 500 were for its members and 250 for general sale) of Gitanjali: Song Offerings containing English translations of 103 poems, with an introduction by Yeats and a pencil-sketch of Tagore by Rothenstein. Gitanjali won the Nobel Prize for Literature in 1913. Tagore dedicated the publication to Rothenstein.

High Commissioner Sir Atul Chatterjee referred the proposal for painting the interiors of India House to the Government of India. The Chief Commissioner of Delhi, Sir John Perronet Thompson, chaired a high-powered committee that selected four artists from the eighty who applied. The successful artists were Lalit Mohan Sen (Lucknow), Ranada Charan Ukil (Delhi), Dhirendra Krishna Deb Barman (Santiniketan) and Sudhansu Sekhar Choudhury (Calcutta), and they travelled to England to be further trained at the Royal College of Art under Rothenstein.

Each of the artists was relatively unknown, yet their paintings were imbued with the spirit of contemporary Indian art and technique. Lalit Mohan Sen, born in the town of Nadia in Bengal in 1898, had moved to Lucknow in 1912. After studying mural art at the Royal College of Art, London, in 1926, he had returned to Lucknow to work as Superintendent, Drawing and Teacher’s Training Class in 1929. That same year, Sen had been chosen to decorate the Viceroy’s House—today, Rashtrapati Bhawan—in New Delhi, subsequently appearing in the competition for painting murals in India House.

Ranada Charan Ukil was the youngest of the famous Ukil brothers. Sarada Ukil (1889-1940), had been an early student of Abanindranath Tagore, coming to Delhi in 1918 as the ﬁrst Arts teacher of Modern School, located at 24, Daryaganj and run by Sarada’s friend Lala Raghubir Singh. The Sarada Ukil School of Art was established in Delhi, in 1926. Two years later, through the “active and keen initiative of the illustrious Ukil brothers, Sarada, Barada and Ranada,” the All India Fine Arts and Crafts Society (AIFACS) was founded in New Delhi, to “propagate art and culture in India and abroad, and to look after the upliftment of artists in India in particular.”

Dhirendra Krishna Deb Barman, born in 1903, studied art at Santiniketan under Nandalal Bose between 1919 and 1928. He went on to specialize in mural painting at the Royal College of Art in London. After working on his project in India House, he was appointed Principal of the Kala Bhawan at Santiniketan. Sudhansu Sekhar Choudhury, born in 1903, studied under Abanindranath and Gogendranath Tagore at the Indian Society of Oriental Arts, Calcutta. He visited Thailand and Cambodia in 1928, appearing in the competition to select artists for the murals of India House a year later. Choudhury, who lived in England between 1929 and 1932, had a solo exhibition at London’s prestigious Fine Arts Society on New Bond Street. After his return to India, Choudhury painted murals in various cinema halls in northern India.

The four young artists were sent to London on scholarships in August 1929. They visited Florence, Rome and other European cities to study the technique of painting on plaster. On completion of their training the artists were employed for the decoration of India House.

They started preparatory work in a temporary studio set up in a room (with a skylight) on the top ﬂoor of India House. It took them approximately ten months to ﬁnish their preparations. On April 9, 1931 the artists began painting. Technical reasons prompted their decision to use egg-tempera—made by mixing powdered pigments with yolk of egg and water—instead of oil. In the tradition of the Bengal School, Indian mythology and Indian history provided their thematic inspiration.

In the lunettes of the Visitor’s Room/Reading Room on the ground ﬂoor there is the poignant legend of Anarkali, as well as the theme of Shasti Puja (worship of the folk-goddess of fertility) painted by Choudhury. The other two lunettes, the End of Roza (The Fast) and the theme of Todi Ragini, were painted by Ukil. On the ﬁrst ﬂoor lobby, Barman painted a set of eight pendentives to represent the eight phases of life: Birth (Janma), Childhood (Balyavastha), Student Days (Vidyarthi Jeewan), Love (Prem), family life (Grahstha), work (Karma), renunciation (Vanprastha), and ﬁnally Nirvana.

In the Library Hall where King George V formally inaugurated the new building of India House in July 1930, Sen painted the lunette Buddha with his Disciples The full splendor of the murals of India House is most visible in the magniﬁcent Central Dome, which is by far the most dominant feature of the building. The murals on the dome merge together harmoniously, depicting four rulers from the history of India. All four artists labored over a period of ten months to transform spectacular historical events into richly colored murals; 24-carat gold leaves were used for the gold background at the then staggering cost of nearly a thousand rupees. The soft, impressionable metal allowed for impregnation with various tints and tones, combining beautifully to create the rich effect visible in the dome of India House.

The Southern Quadrant was painted by Ukil, portraying the scene in which Alexander the Great saluted the chivalry of the Indian King Porus after the latter’s defeat in the Battle of the Hydaspes (today Jhelum) River in 326 BC. The western Quadrant was painted by Choudhury, showing the Emperor Chandragupta Maurya, who acceded to the throne of Magadha in 322 BC, acknowledging a morning salute from his bodyguard of women soldiers. Deb Barman painted the Northern Quadrant visualizing the Emperor Ashoka (304 BC-232 BC) sending his daughter Sanghamitra to Sri Lanka to propagate the teachings of Buddha. The Eastern Quadrant was painted by Sen, depicting the Mughal Emperor Akbar (1542-1605) and his architect, discussing plans for the new capital Fatehpur Sikri.

Both Ukil and Choudhury painted “Sky and Birds (Balaka)” on the coved ring above the dome and the dome and the ceiling at the base of the hanging lantern. These are in a series of eight panels, worked in light pastel colors, portraying birds in ﬁght in a sky of clouds. Fittingly, Rabindranath Tagore visited India House in 1931 with Rothenstein to meet the artists. He was delighted to discover that all the subjects and themes selected for the murals were typically Indian. The painting of all the murals was completed in January 1932. The spirit of Indian nationalism had found creative expression in the heart of London.

[The author has served as Deputy High Commissioner of India to the United Kingdom. Reprinted with permission from India Perspectives.]