Commentary: Relax Chauvinists, Hindi Can Win the Language Battle on Its Own 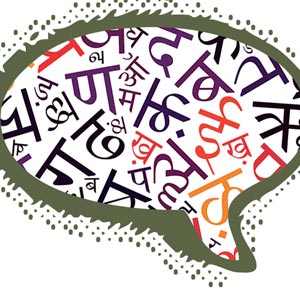 Whatever the Hindi chauvinists might say, we don’t have one “national language” in India, but several.

Once again I found myself caught up in an unnecessary Twitter controversy—this time over my assertion, in response to an innocent question, that Hindi is not our national language. The trolls descended on me with the ferocity that marks their zeal. I was accused of being antinational, of being a slave to a foreign language—as if the British had excreted their language on us as pigeons might spatter us with their droppings.

Unfortunately for them, I was right: the Constitution of India provides for no “national language.” But being wrong rarely bothers a troll.

Popular does not mean national
The ugly exchanges did, however, reveal two more essential truths about our country. The first is that, whatever the Hindi chauvinists might say, we don’t have one “national language” in India, but several. The second is that the Hindi zealots whose assertion “Hindi hamari rashtrabhasha hain” had provoked the recent debate, have an unfortunate tendency to provoke a battle they will lose—at a time when they were quietly winning the war.

When Hindi speakers emotionally decry the use of an alien language imposed on the country by British colonialists and demand that Hindi be used because it speaks for “the soul of India,” or when they declare that “Hindi is our mother, English is a stranger,” they are missing the point twice over. First, because no Tamil or Bengali will accept that Hindi is the language of his soul or has anything to do with his mother. It is as alien to him as English is. And second, because injecting anti-English xenophobia into the argument is utterly irrelevant to the issue at stake for those who object to the idea of a national language.

The issue is quite simple: all Indians need to deal with the government. We need government services, government information, and government support; we need to understand easily what our government is saying to us or demanding of us. When the government does so in our mother tongue, it is easier for us. But when it does so in someone else’s mother tongue with which we are less familiar than our neighbor, our incomprehension is intensified by resentment. Why should Shukla be spoken to by the Government of India in the language that comes easiest to him, but not Subramaniam?

The de facto solution to this question has been a practical one—use Hindi where it is understood, but use English everywhere and especially in the Central Government, since it places all Indians from all parts of our country at an equal disadvantage or advantage. English does not express Subramaniam’s soul any more than it does Shukla’s, but it serves a functional purpose for both, and what’s more, it helps Subramaniam to understand the same thing as Shukla.

The fact is, Hindi’s vocabulary, gender rules, and locutions do not come instinctively to everyone. Native speakers of languages like Malayalam, that do not use gender, can understand why a woman must be feminine (“who aurat aayi hain”) but are genuinely mystified as to why a table should be feminine, too, since few tables remind one of women.

Ideally, of course, every Central Government document, tax form, or tweet should be in every one of India’s languages. Since that is not possible in practice—because we would have to do everything in 23 versions—we have chosen to have two official languages, English and Hindi. State governments complement these by producing official material in the language of their states. That leaves everyone more or less happy.

The great Hindi push
Since the BJP came to power, however, they have not been content to let sleeping dogmas lie. They have been pushing Hindi with more enthusiasm than judgement, requiring governmental file notations to be written in that language, even where that undermines efficiency.

Obliging a Keralite bureaucrat in Delhi to read and write file notations in Hindi to be submitted to a superior officer from Odisha makes no sense, since neither man would be using a language with which he is at ease. Both may write atrocious English, for that matter, but it’s the language in which they are equal, and it serves to get the work done.

Language is a vehicle, not a destination. In government, it is a means, not an end. The Hindi-wallahs fail to appreciate that, since promoting Hindi, for them, is an end in itself.

The result is episodes like the time that Shri Mulayam Singh Yadav, who punctuates English speeches in Parliament with cries of “Hindi bolo” from time to time, became Defence Minister of India and wrote to the Chief Minister of West Bengal, Jyoti Basu, in Hindi. In due course he received a reply—in Bengali. One is only grateful that no urgent issue of national security was involved in either communication.

Hindi is winning, the chauvinists can relax
The irony is, as I observed earlier, that the Hindi chauvinists should realize they were winning the war. The prevalence of Hindi is far greater across India today than it was half a century ago. The Parliament has become a bastion of Hindi; you hear the language now twice as often as you hear English, and three times as often as you did in the previous Parliament, when stalwarts like Pranab Mukherjee and P. Chidambaram refused to speak anything but English on the floor of the House. Our present Prime Minister speaks only in Hindi, and his ministerial colleagues, with only a handful of exceptions, try to emulate him.

But the inevitable triumph of Hindi is not because of Mr. Modi’s oratory, or the assiduous efforts of the Parliamentary Committee on the Promotion of Hindi. It is, quite simply, because of Bollywood, which has brought a demotic conversational Hindi into every Indian home. South Indians and Northeasterners alike are developing an ease and familiarity with Hindi because it is a language in which they are entertained. In time, this alone will make Hindi truly the national language.

But it would become so only because Indians freely and voluntarily adopt it, not because some Hindi chauvinist in Delhi thrusts his language down the throats of the unwilling.

Still, if we watch enough Bollywood movies, we’ll pick it up one day. Just don’t tell us that we must, because it’s our national language. It’s not.

Language should be an instrument of opportunity, not of oppression. The day we stop fighting over it, achche din might really be here.

Shashi Tharoor is an internationally acclaimed author as well as a Member of the Parliament in India, from the state of Kerala. A version of this article first appeared in thequint.com.