Commentary: Walking While Brown Is Now a Crime? 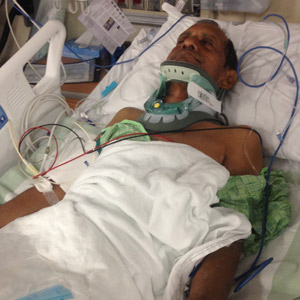 Jnanpith award winner Bhalchandra Nemade recently stirred up a hornet’s nest by calling English a “killer language.” But thousands of miles away across the world in Alabama, Sureshbhai Patel discovered that the lack of English can be even more dangerous.

Patel who had recently arrived in Madison, Alabama from India to help take care of his new grandson went out for a walk in the suburban area where his son lived. He ended up in hospital, partially paralyzed. He was not mugged or robbed. Policemen did that to him. Patel spoke no English. He did not understand what the policemen were telling him. He just said “No English. Indian. Walking.” The price he paid for that moment of language barrier may prove to be a lifelong one.

Even in a country where death by police is tragically far more common than it should ever be, where, post-Ferguson, one sees Black Lives Matter posters with a clenched fist over little storefront black churches, the story of Sureshbhai Patel sticks out.

Patel is 57, a grandfather. This is not a My Name is Khan story. It’s not a black teenager in a hoodie story. This is not a homeless man with mental problems story. Or even a Vietnamese woman in her own kitchen with a vegetable peeler story. The tragedy is those stories have been so normalized that people are almost not surprised—as if there is ever justification for anyone minding their own business to be suddenly gunned down, beaten up, knocked flat, or paralyzed. We should be surprised and shocked that this happens to anyone. Instead we are now shocked because it happened to a grandfatherly Indian immigrant as opposed to a young Black man or Middle Eastern man.

Instead of looking at these victims and trying to decipher what they were doing wrong, how they might have possibly brought it upon themselves, it’s worth wondering how trained law enforcement keep replaying this tragedy across the country.

We learn only the wrong lessons from this story.
Don’t wear a hoodie on a dark street.
Don’t wave a vegetable peeler in your own kitchen.
And now don’t let your parents go for a walk if they cannot speak English?

That’s sad commentary for a country that prides itself on being, as its politicians remind the voters ad nauseam, a nation built by immigrants. The fear of the other is a dark and stubborn streak that is as much part of the American story as the American dream. There is a kneejerk racism—that shoots first and asks later—that seems impossible to uproot from the American soil. According to the Washington Post, a neighbor reported Sureshbhai Patel as a “skinny black guy” maybe in his 30s, someone he had never seen before, “walking close to the garage.” That was enough to make him a figure of suspicion.

Add to that the barrier of language and you have the deadly tripwire that turns someone’s American Dream into the American nightmare. In 1992, a Japanese exchange student, who spoke very little English, dressed as John Travolta for Halloween, got lost in Baton Rouge and rang the doorbell of the wrong house while looking for a party. He got a bullet instead. The homeowner, unable to understand his English, decided he was a home intruder. An unarmed intruder who rang doorbells! The exchange student was 130 pounds. The homeowner was 6’2”. There was a trial but the homeowner was acquitted. His defense emphasized he was an “average Joe” who liked “sugar in his grits.”

That’s how the story plays out almost every single time. In this case the police officer Eric Parker has been arrested and Madison police has said that his actions did not meet the “high standards and expectations” of his department. The Patels’ lawyer told the media that the police were finally doing the “right thing” even though on Monday they were trying to blame the victim.

But we should not hold our breaths. While the arrest is unusual it’s even more unusual for a police officer to actually be convicted for excessive use of force in the line of duty. Or even charged according to the National Police Misconduct Reporting Project and a study from Bowling Green State University where 664 incidents of excessive force from 2005-2011 found only 71 arrests for murder or nonnegligent manslaughter. Just 31 came when the officers were on duty.

It is human to make mistakes. But mistakes have consequences and it seems over and over again the consequences are borne by ordinary citizens—the Patels, the Browns, the Trans—and not by the man in blue wielding the gun.

“There is nothing suspicious about Mr. Patel other than he has brown skin,” his lawyer told the Huntsville Times. Once there was a great hue and cry about racial profiling by law enforcement in America and it resulted in a landmark report called Driving while Black. Then, after 9/11 we heard about Flying while Arab. Now we learn about the dangers of Walking while Brown.