Cuisine: A Pinch of GOLD 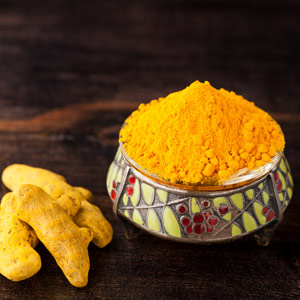 For most Americans, turmeric is a new fad; for Indians, it is an age-old spice that is woven into the fabric of life, far beyond its ubiquitous place in the kitchen.

Entering the Indian restaurant on Jordan Lane, in Huntsville, Alabama, on a summer afternoon, makes you swoon with the heady aroma of cardamom, cinnamon, turmeric, onion, garlic, asafetida… and the sweat of the cook from Pathankot! Steaming hot tureens of biryani, channa masala, saag paneer, and eggplant fritters may lack the aesthetic appeal of a Michelin-grade restaurant, but they make up substantially for it with their appetizing aromas. When I dine with my friends, the girls often close their eyes, inhale deeply, and allow me to take them on a culinary trip into the exotic back alleys of ancient cities like Delhi, Banaras, and Mumbai.

I have lived in Alabama for over three decades, but my spice-primed taste buds compel me to eat Indian food often, and as I spread a dab of chutney on my papad, my heart skips a beat and I am back in my mother’s kitchen, like a happy baby curled up in a cosmic womb. As I wipe the spice off my fingers, I smile at the golden stain that clings to my skin. It’s a bit like yellow pollen that dusts off fingers from white lilies when you are arranging a bouquet, but this golden patina has a deeper aura and wants to penetrate your core with the brilliance of the Vedas. No, Anna, I correct my erudite friend as she admires the sunny slivers of cabbage on her plate, the color is not from the stately saffron but from the ubiquitous cousin of ginger root— my haldi and your turmeric! 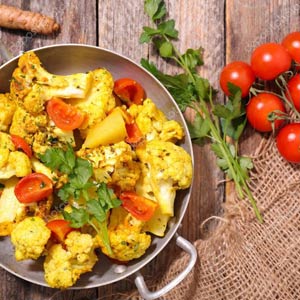 As the girls enjoy the colorful vegetables on their plate, I am lost in another reverie, the time when I first opened my mother’s spice box. We sisters loved to peer into the tiered, painted chambers. To our inquisitive eyes it was more compelling than her shringar box (make-up kit). The box held assorted ground and whole spices: turmeric, cumin, bay leaves, coriander, mustard, cinnamon, nutmeg, cardamom, black peppercorns, cayenne, dried mango powder, cloves, and salt. This fragrant treasure trove had the power to change our genetic code.

“Each spice has a special day to it. For turmeric it is Sunday, when light drips fat and butter-colored into the bins to be soaked up glowing, when you pray to the nine planets for love and luck.”
– Chitra Banerjee Divakaruni, The Mistress of Spices.

Turmeric comes from Old English “turmeryte” or “tarmaret” or Latin terra merita (meritorious earth). The name of the genus, Curcuma, is derived from the Sanskrit kunkuma (slaked lime), referring to both turmeric and saffron, used in India since ancient times. Most turmeric is used in the form of rhizome powder to impart a golden yellow color. Turmeric has a bitter, black pepper-like flavor and an earthy, slightly pungent, mustard-like aroma, and is the principal ingredient in curry powders. It is used mostly in savory dishes and pickles but may be used in some sweets. In the West it is used in canned beverages, baked products, dairy products, ice cream, yogurt, orange juice, biscuits, popcorn color, cereals, broths, sauces, and gelatin. Cambodian, Indonesian, and Thai curry paste and soups contain fresh turmeric. In India, a popular winter drink is warm haldi doodh—“turmeric latte,” also known as “golden milk” in the United Kingdom. 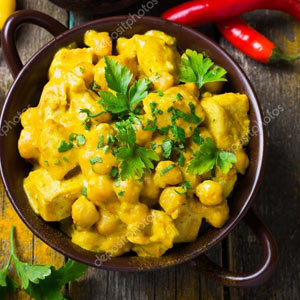 Turmeric grows wild in the forests of South and Southeast Asia, where it is sourced for Ayurvedic, Unani, and Chinese medicines. Curcumin, the active ingredient of turmeric, has been studied in the West for combating Alzheimer’s disease, arthritis, and cancer. In India it is used for treating myriad maladies. In our garden in Mumbai, there is a perennial herbaceous haldi plant about 3 feet tall with a double row of alternating leaves. At the top of the inflorescence are light-green and reddish-purple tapering bracts. As I hold the knotted, aromatic rhizome that yields turmeric, I remember when I hurt myself and my mother cleaned my scraped skin and applied a dab of turmeric on it, telling me to be more careful. When I had a sore throat, she bundled me up with Vicks VapoRub and a cup of warm milk, laced with a potion of roasted turmeric, black pepper, and honey to take the itch out of my tonsils and soothe me into a dreamless sleep. A face mask of clotted cream, a pinch of turmeric, and coarsely ground besan (chick pea flour) was Mom’s daily exfoliating beauty ritual. When I was feverish, she stirred in turmeric, ginger, and a get-well-incantation into a soft besan halwa, a recipe honoring the ancient wisdom of the Earth Mother.

Turmeric is entrenched in Hindu traditions. During Hindu wedding celebrations in North India, a haldi ceremony is performed, a day before the wedding: the bride and groom are anointed with a paste of turmeric, sandalwood, and rose. In Bengal this is called gaye holud in memory of Lord Shiva and Sati’s wedding where haldi followed by mehendi (henna) were applied to the couple to calm their nerves prior to the event. In South India, threads infused with dried turmeric are used for the mangalsutra and thali necklace, the equivalent of marriage rings in the West. At Khandoba’s temple in Jejuri, a town in Maharashtra state, devotees throw turmeric powder on each other. During Holi, the festival of colors, haldi-infused water is gleefully splashed around and eventually everyone looks like a Buddhist monk!

I bid my friends adieu and drive back home, my senses satiated with good food and conversation. On a hunch, I stop at the farmer’s market on Hughes Road and treat myself to Piper and Leaf artisan iced tea, hand made from slippery elm, ginger, and turmeric! The tingly, clean warmth percolates from my throat to my belly and into my soul. I become golden!

Monita Soni, MD, of Decatur, Alabama, grew up in Mumbai. She is a pathologist who diagnoses cancer in her day job. Reading and writing poetry is a passion that splashes her literally with a sparkling abundance. You can hear her commentaries on “The Sundial Writers Corner” on WLRH 89.3 FM/HD, Huntsville, Alabama.